In a time before the internet, children gathered among stacks of books arranged according to letters and numbers taped to their spines. There, a wise person known as a teacher-librarian would guide students' imaginations to far off places through the pages of atlases, encyclopedias and other rare texts.

Today, many Canadian children have never even seen a school librarian and never will. Nova Scotia has none, and the full-time equivalent of just three are left in all of New Brunswick. At least one school board in Ontario hasn't had a teacher-librarian in 15 years, and numbers have declined in Alberta and British Columbia as well.

Spring is a hard season for bibliophiles, as school boards across the country set their budgets for next school year. In recent weeks at least two Ontario boards have decided to cut library staff.

Teacher-librarians have been among the first to be sacrificed when boards make cuts, and the digital innovations they help students navigate are now being used as the justification for eliminating their jobs, and Canada is bucking an international trend of investing in school libraries.

People for Education, an Ontario advocacy group, will release a special report on the decline of school libraries on Monday.

The study shows that less than 12 per cent of Ontario elementary schools have a full-time librarian, and small communities, particularly in the north, are most likely to go without. Today, barely half have even a part-time librarian, down from 80 per cent in 1997/98.

The group's concerns are about more than nostalgia: School libraries and librarians have been linked to several measures of student achievement, including standardized test scores and a love of reading. Most studies have come out of the United States and Australia, but Canadian researchers confirmed in 2006 that these benefits transcend borders and remain strong in a post-internet world.

"It's not surprising that when you've got engaged teacher-librarians, they're going to engage the students more and the more they engage our children the better they learn," said Donald Klinger, the Queen's University professor who led the new study.

What did surprise Prof. Klinger was the strength of the association between students' performance on standardized tests and the presence of school librarians: His study showed scores were boosted by as much as 8 per cent.

Reasoning that digital records can replace teacher-librarians is backward, according Roger Nevin, a high school librarian in Peterborough, Ont. He said that he and his colleagues are on the front lines explaining the limitations of Wikipedia, protecting online student privacy and preventing cyber-bullying.

"A lot of people don't realize their kids' library is very different from when they went to school," said Mr. Nevin, who is also the president of the Ontario School Librarian Association. "Two-thirds of my job now is dealing with technology."

The OSLA decided at a recent emergency meeting to begin surveying and counting its membership. Part of the problem is that a lack of research and federal oversight in education gives only glimpses of their dwindling numbers.

"The role of the teacher librarian has not been well understood across the country, and it's very hard to make a case for a position for which you don't have very clear guidelines, policies and expectations," said Dianne Oberg, a professor at the University of Alberta whose research focuses on school libraries.

In April, declining enrolment forced the Windsor-Essex Catholic District School Board in southern Ontario to make up a projected $8-million to $10-million reduction in provincial funding. Trustees voted to lay off 16 secretaries, several teachers, and nearly all 39 library technicians. At the same time, Peterborough's Catholic school board, east of Toronto, also said it is cutting library staff.

"We have to get past the old concept, the old tradition of what libraries used to be..." said Cathy Geml, associate director of education for the WECDSB. Books quickly become outdated and inaccurate, and the board is focusing its resources on internet research.

"We have people in various capacities in the secondary schools that are teachers and administrators who could support and teach digital literacy throughout the day."

"It amazes me that we have as a society decided in Canada to pull back on teacher librarians," said Prof. Oberg. "….While in Europe over the last 10 years, in Norway, in Sweden, in Portugal, Italy, Finland, there have been major national programs for improving school libraries and investing in school libraries as a force for improvement of education." 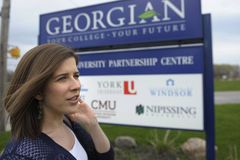 Getting a read on the future of publishing
March 17, 2011
Opinion
Time to Lead: The shaky state of Canadian book publishing
March 15, 2011
The rise of the e-book lending library (and the death of e-book pirating)
February 18, 2011