Universal remotes are destined to become one of the many technological casualties of the smart phone/tablet revolution. Used to be people would spend hundreds of dollars on a device that could control all of their home theatre components. Now there's an app for that.

Or, in the case of Griffin's Beacon Universal Remote Control, an app plus a small bridging device.

The Beacon is a little black box with a shiny dome that sits on your coffee table. It has a Bluetooth receiver that connects with your tablet or phone and an infrared (IR) transmitter that communicates with your home theatre components.

It works in tandem with a free app offered by Dijit, a company that keeps a repository of IR codes for more than 200,000 living room devices as well as guides for every cable, satellite and over-the-air service provider in North America.

All you need to do to get up and running is pop four double-A batteries into the Beacon, download the Dijit app to your phone or tablet, and use its simple (if not completely reliable) wizard to automatically find and detect the devices in your living room. Within the space of perhaps five or 10 minutes you'll be able to sweep all of your old remotes into a drawer and control your home theatre with the same device you already keep handy on the couch to surf the Web, check email and update your Twitter and Facebook accounts.

I put the Beacon on trial in a brutal real-world testing ground: My living room. At the moment, my home theatre consists of a Samsung plasma television, a Rogers HD set-top box, a Sony soundbar, a Sony Blu-ray player and some video game systems. It's a pretty standard configuration for a Canadian living room.

The Dijit wizard found usable IR codes for my television, Blu-ray player and soundbar remotes in seconds. However, I encountered problems with my Rogers set-top box, a Scientific Atlanta Explorer 8300 HD. It found a couple of codes, but neither worked properly. I ended up having to manually program all of the main buttons, a simple but time-consuming process that involved pointing the Scientific Atlanta remote at the Beacon and jamming buttons as prompted by the app.

Sadly, Sony's PlayStation 3 – a device in millions of Canadian homes – is incapable of receiving IR commands. Unless you plan to pick up an IR add-on, like the Logitech Harmony Adapter, the Beacon simply can't communicate with it. That means most gamers will need to keep at least one dedicated remote on their coffee tables.

Be aware, too, that using an app rather than a dedicated remote has its disadvantages. Assaulted by super-loud commercial breaks, naturally you reach to turn down the volume. However, rather than simply tapping a volume button I had a four step ordeal: Slide my phone on, call up the app, select the proper device (my soundbar) and finally spin down the decibel dial. The offensive commercial was nearly over by the time I was able to reduce its volume.

This problem is compounded if it's been more than an hour since you last used the app. The Beacon goes into sleep mode after 60 minutes to conserve battery power. Reconnecting requires either a tap of the device's bulbous top or jumping back into your phone's Bluetooth settings.

But even with these caveats I enjoyed using my phone to control my home theatre – and not just because it cuts down on living room clutter.

The Dijit app provides a cable channel guide that makes finding shows infinitely easier than using Rogers' embarrassingly slow, outdated and convoluted menus. It let me search and find the shows I wanted in moments, and offers some basic preference functions to help users keep tabs on their favourite programs.

It also provides Netflix integration so you can search for and add shows to your playlist without jumping out of the program you're watching, as well as some rudimentary Twitter and Facebook features in case you want to let your friends know what you're watching.

Before buying, take note that separate Beacon systems exist for iOS and Android devices. I'm not aware of any technical reason why one Beacon shouldn't be able to handle both. Perhaps Griffin needed an iOS-only edition to guarantee shelf space in Apple Stores. Whatever the cause, it's a disservice to households that don't fall neatly into a single mobile OS camp (like mine).

Also, folks who've yet to jump into the tablet game should be aware of another even simpler option: Sony's Android tablets. These devices come preloaded with a slick universal remote app and have an infrared sensor built in, eliminating the need and expense of a device like the Beacon. I evaluated one a couple of months ago and can vouch that its baked-in universal remote functionality works as advertised.

Griffin's Beacon Universal Remote Control is available online and at Apple Stores for $69.95.

A computer you might want in your entertainment console
December 5, 2011 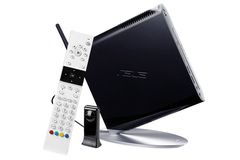