Robots and drones aren't just proving useful to the military, they're also infiltrating our businesses and homes as tools and toys. But, while the Roomba might clean your floors, it's not exactly the most entertaining thing to watch.

Here then are some of the season's hottest drones and robots, designed to exterminate boredom and enforce mandatory fun.

The drone comes with two bodies: one indoor version with rings that go around its four rotors, and another outdoor model that exposes the rotors.

Perhaps the best-known toy drone, Parrot’s smartphone- or tablet-controlled quadricopter is a ton of fun to fly thanks to its responsive controls and video recording capabilities. While not intended for professional aerial videography, the AR Drone 2.0 is also a step up from some of the cheaper remote-controlled flying toys out there. The drone comes with two bodies: one indoor version with rings that go around its four rotors, and another outdoor model that exposes the rotors. The foam bodies slip over the main chassis, which houses the rechargeable battery.

After downloading the control app onto your Android or iOS mobile device and connecting to the wi-fi network generated by the drone itself, startup is a breeze. Press the “take off” button and it hovers up. Twin virtual joysticks on-screen then control its altitude, direction and speed – it only takes a few minutes to get the hang of it. Control is even better if you can get your hands on the Nvidia Shield, which has physical sticks akin to a video game controller. The drone also has a 720p camera in its nose that beams whatever it sees to your device, where it’s recorded (it can take still photos too). The only downside is there’s no sound, since the relatively loud rotors would drown out any audio. Still, it’s a fun way to get an aerial perspective on things.

The other issue with AR Drone 2.0, which retails for around $349, is its short battery life. It only gets about 10 minutes, so you may want to add some spare power cells to the stocking. 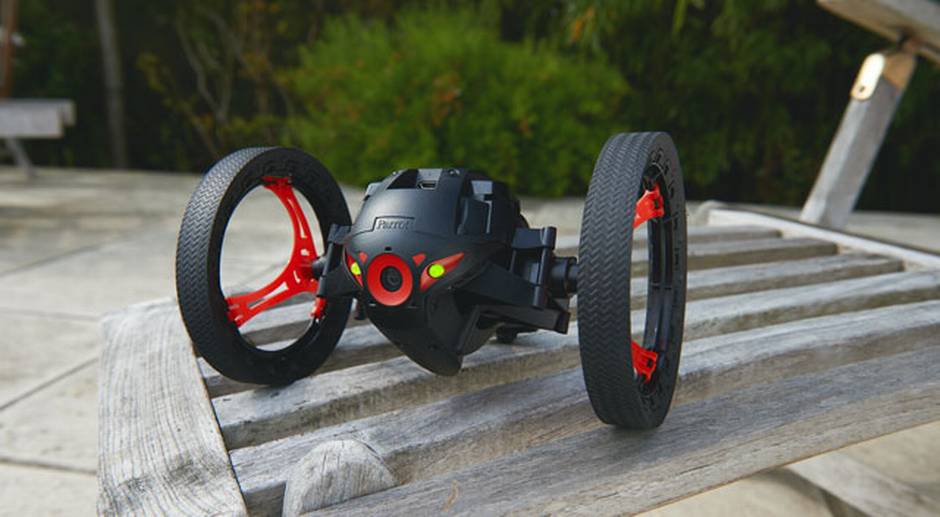 The Jumping Sumo, which sells for around $149, is Parrot’s ground-based answer to its flying AR Drone. With two big wheels holding up an orb-like body, it’s essentially a rolling, jumping video camera that’s lots of fun to drive.

As with its flying cousin, the Jumping Sumo creates its own Wi-Fi network and is controlled via smartphone or tablet app – Android, iOS and Windows 8.1. The app features a live video feed of what the toy sees, with the same sort of virtual joysticks controlling its movements. The Sumo can also snap photos, but it needs a separate mini-USB stick to record video – and even then, it’s not high-definition. Still, as with flying drones that can give you a bird’s-eye view, the Sumo lets you get an unusual, floor-level perspective.

You can have it zip through cool pre-programmed routes, set up via the app. But its best trick is the jumping capability – the Sumo rears back on its back leg and then shoots itself up a foot or so. Amazingly, it can even climb stairs this way. On the downside, it also has short battery life of only about 20 minutes. 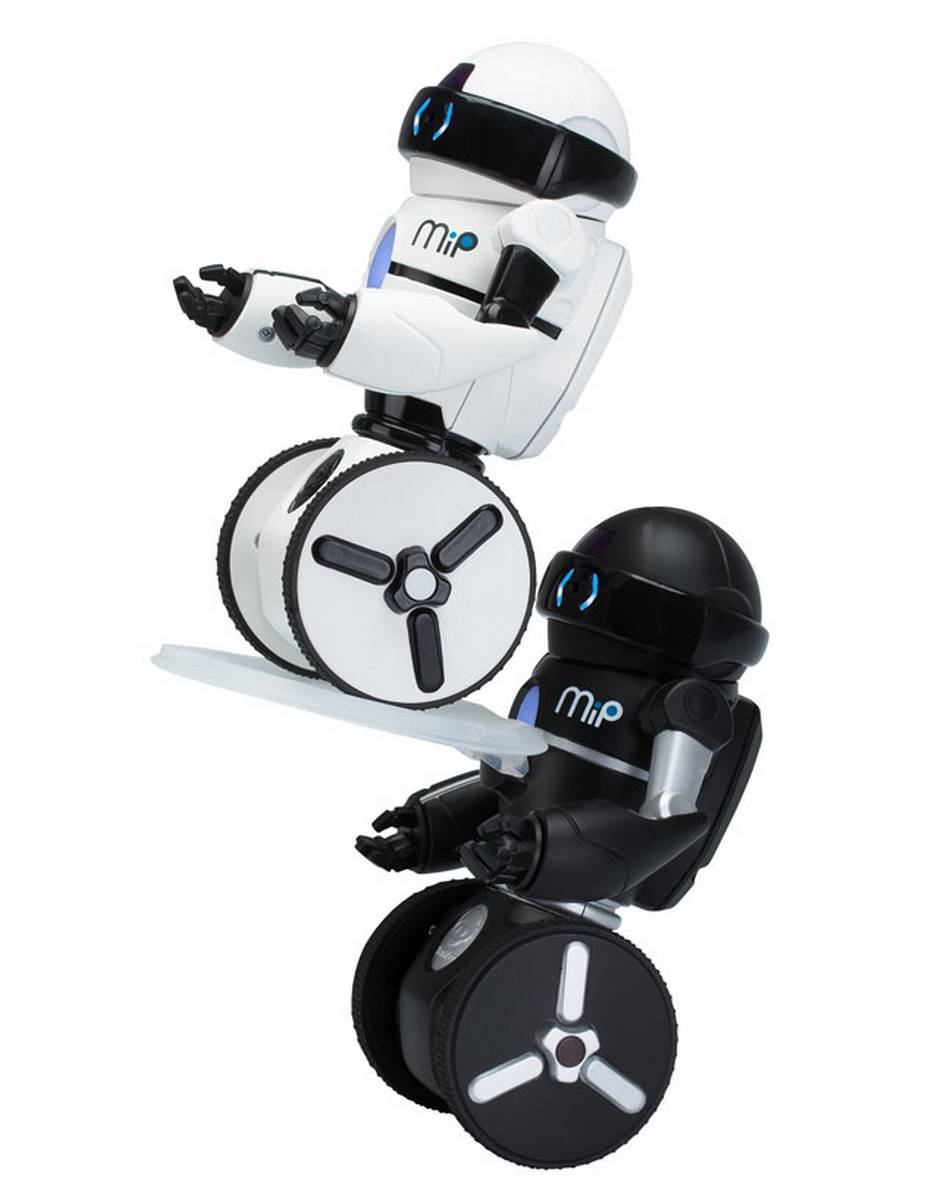 Here's one MiP balancing another MiP.

The MiP – or Mobile Inverted Pendulum – from WowWee doesn’t look like it should be able to stand on its own, but it does. The foot-tall humanoid robot with wheels for legs tips over when powered down, but flip the power switch and it will automatically move back and forth slowly to keep itself upright.

Once its rolling, you can control it with gestures. Point your hand downward in front of it and it’ll move straight. Flick your hand upward and it moves back. For more fine-grained Bluetooth-enabled control, there’s the iOS and Android app, which not only lets you drive MiP around via virtual joysticks, it also activates other features and tricks.

MiP is a vocal robot and it likes to express itself. Pick it up, for example, and it emits a sad “Awwww.” The app can be used to change its mood: “happy” creates blurts of “Woohoo,” try “funky” and it starts to boogie around on the spot. Its best mode is “dance,” where MiP rolls and spins to the beat of the music playing through your smartphone’s speakers. The $99 MiP is a small robot with an endearingly big personality. 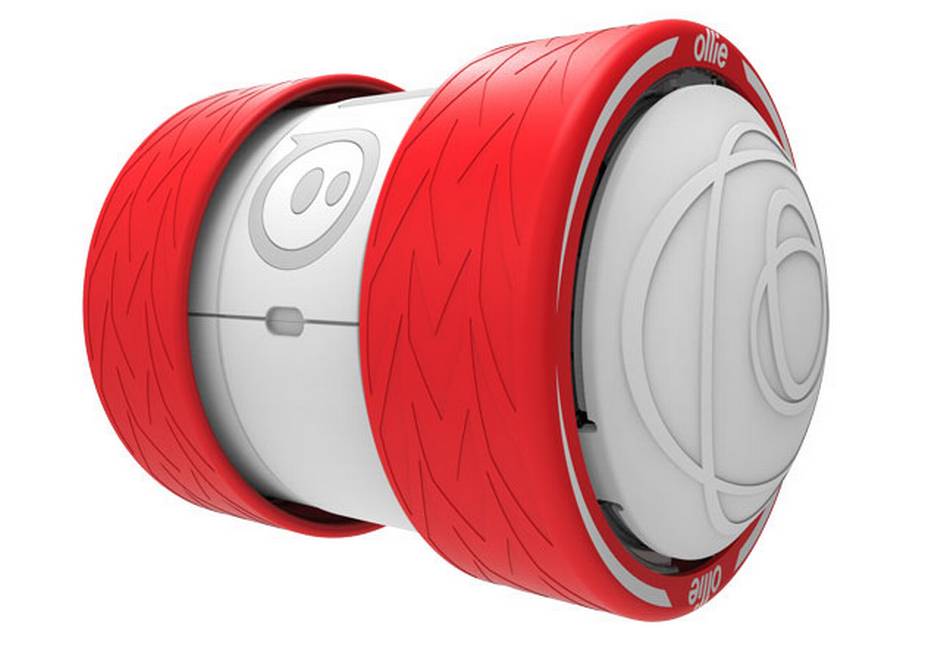 This $99 toy can be a hoot with its maximum speed of 22 kilometres an hour.

If fast and simple is your thing, look no further than Orbotix’s Ollie. Basically a motorized soup can on wheels, Ollie is designed for driving and spinning around – no cameras or audio tricks here. The toy connects to Android and iOS devices via Bluetooth and is controlled via the familiar-by-now virtual on-screen joysticks.

The controls come from the fighting-game school of user interface: they’re easy to learn and difficult to master. Driving Ollie around is simple enough, but getting it to spin or reverse while moving takes some practice. If you can manage it, the $99 toy can be a hoot with its maximum speed of 22 kilometres an hour.