From haute hardware to sexy software, Samsung's new Galaxy S II is the best handset yet to run Google's Android operating system. There are a couple of tiny chinks in its svelte armour of awesomeness, but those weaknesses all but disappear in the face of all the things it does well.

Most of its feathery 117 gram body measures just under 8.5 millimetres thick, making it the skinniest piece of telecommunications-enabled plastic around. It's almost unfathomable that so much high-tech hotness could be contained inside such an emaciated case.

Even more impressive is its Super AMOLED Plus screen, which - and this is coming from a happy iPhone 4 user who thinks the world of Apple's Retina technology - is the most attractive I've ever seen on a phone. Measuring a whopping 4.3 inches diagonally, this monster-sized handheld display delivers images that remain clear, sharp and undistorted at virtually every angle. Each pixel is lit individually, which results deep, authentic blacks. There are times when it's all but impossible to distinguish where screen ends and bezel begins. I've never seen anything quite like it on a phone.

A traditional assortment of controls - power on the right edge, volume rocker on the left, home, menu, and back buttons below the screen - are intuitively located. A mic jack is sunk into the top edge, a mini USB port for charging and data is at the bottom. The sides are comfortably rounded to fit the contours of a user's fingers, and the back panel has a pleasantly rough finish.

However, I do wonder if it is built to last. It weathered my brief time with it well enough, and its slim plastic body is free of creaks and surprisingly resistant to torque, but in the battle to build ever-more-slender devices, eventually something has to give. It seemed so light and insubstantial in my hand that I couldn't help but worry that it would break. Its anorexic battery cover, for example, has the thinness and pliability of a playing card, and feels as though its edges could snap if removed or inserted incorrectly.

Also, that huge screen may have pushed the call speaker too high. Sitting just a few millimetres from the top edge, I found it was often pressed up against my ear cartilage, effectively muting the sound. I had to consciously lower the phone just a little to ensure the flow of sound into my inner canal remained unobstructed. Ear shape is a pretty individual thing, though, so I'm willing to concede that this could be a personal problem that others won't experience.

No complaints about the 8-megapixel camera, though. The camera app offers a wide range of manual controls that provide dozens of options of for customization, including sensitivity, white balance, and focus. Even if you leave these controls alone and just start tapping the virtual shutter button you're still likely to achieve reliably usable still images - and some pretty watchable HD video, too. It's no replacement for a dedicated camera - noise is plainly detectible to discerning eyes even in brightly lit images, and it hasn't the subtle tones and colour shifts achievable with bigger image sensors and better glass - but it's not trying to replace your Canon or Olympus. You're unlikely to find a better shooter in phone form.

Moving inside, the Galaxy S II has potent guts for a device its size, including a gigabyte of memory, a 1.2-GHz dual core processor, and support for 4G/HSPA networks for download speeds of up to 21 Mbps (that's under ideal conditions - I didn't run a speed test).

These numbers add up to an extremely quick and fluid Android experience. Apps open instantly, surfing the web can be nearly as speedy as it is on a PC, there's no detectable lag when skipping between home pages or zooming in on pictures and small text, and streaming videos - including Flash - load quickly and play stutter free.

We've already discussed Android 2.3 in our review of the Google Nexus S so I won't get into its features here. However, I will touch on some of the ways Samsung has customized the experience via the latest version of its own TouchWiz Android skin. I'm generally not supportive of the sort of changes many hardware manufacturers make to Android, but I have to admit that I rather like most of those that Samsung implemented in the Galaxy S II.

For starters, Samsung has altered the lock screen to include buttons for missed calls and messages. Just flick one of these buttons to the side to jump straight into the associated app. It's a great little time saver when unlocking your phone.

TouchWiz also gives users motion controls for performing common tasks. For example, you can move app icons between home screens by keeping your finger on them and shifting the phone a couple of inches left or right. Similarly, you can zoom in and out on pictures in the photo gallery or pages in the web browser by placing two fingers on the screen and tilting the phone back and forth. But the gesture I warmed to most was flipping the phone on its face to silence incoming calls. No more fumbling for controls when you've forgotten to switch your phone off in a meeting.

Another novel way of dealing with inopportune callers is to immediately respond with canned text messages, such as: "I'm driving," "I'm in a meeting," or "I'm at the cinema." It's as easy as choosing to answer or ignore a call; all it takes is a slide and a tap.

Folks who obsess over performance, meanwhile, will dig the ability to instantly call up the task manager by holding down the home button and then tapping the icon that pops up. From here you can view how much memory and how many processor cycles are being eaten up by individual apps and close those you no longer need. One more tap and you can shut down inactive background processes.

Many users will find at least some of these innovative features quite useful. However, there's no telling whether such deep interface modifications will delay or make it difficult to upgrade to newer versions of Android, as has often been the case in the past with handsets that lay a fresh skin over Google's operating system. We'll have to wait and see.

That just leaves power. I used the Galaxy S II most heavily during a two day jaunt to New York that saw me checking email and Twitter frequently, relying heavily on Google Maps to find my way around, making about a dozen calls, and even using the phone as a WiFi hotspot for my tablet at the airport. I had screen brightness set to about 30 per cent most of the time, except when I was outside. I managed to get through both days without recharging and still had a slim green line of power to spare when I arrived home late the second evening. I'd rate that as very good battery performance.

With its strong line of Android phones and tablets, Samsung has proven itself a great partner for Google over the last couple of years, and the Galaxy S II only cements the South Korean manufacturer as the company to beat when it comes to Android devices. Pair it with a Galaxy Tab 10.1, which will launch next month in Canada, and you have the most compelling consumer alternative yet to Apple's iPhone/iPad ecosystem. 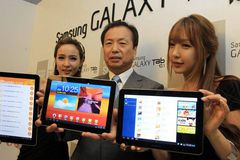