"I need a new camera, what's the best one out there?" That's a loaded question for a professional photographer, and it's one I get asked often. The answer is pretty simple: The best camera out there is the one you have with you, and more often than not, that's going to be a smartphone. Blackberrys, Androids and iPhones are popular choices, but there are other options.

My Twitter handle, @2manycameras, suggests that I have a thing for cameras. If I'm out with friends specifically to make photographs, I may take the Leica or Hasselblad or whatever strikes my fancy that day. If I'm not working, I'm not inclined to take my DSLRs out as they're big, bulky, heavy and I see enough of them during the week. So, when I had the opportunity try the compact Nokia Lumia 1020 and its large 41 megapixel sensor, how could I say no?


One feature that stood out on the 1020 was the number of manual controls afforded the shooter. I’m guessing most users will leave everything on auto, but I found being able to adjust the focus, colour balance and exposure compensation was invaluable for the times I wanted to take over. My iPhone doesn’t have anywhere near the same built-in controls (even after downloading the Camera+ app which is a notch above the iPhone’s basic feature set). 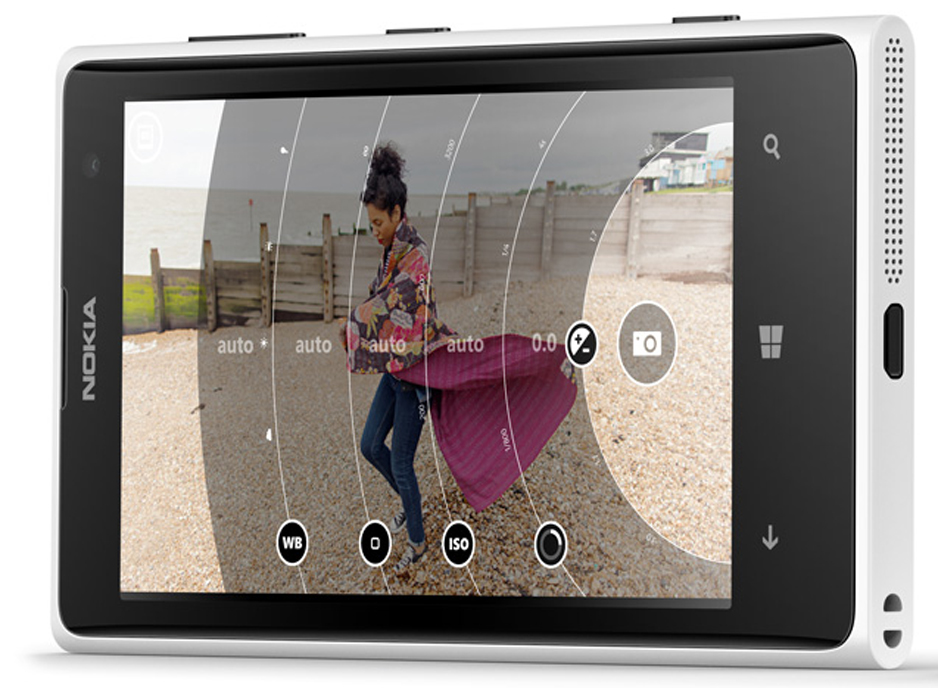 A wet morning helps bring out the colours of various elements in this photo. The camera was able to retain the natural colour of the green leaves while still being able to show good tonal capture of the fallen leaves on and around the canoe. (Shot at 125 ISO.) 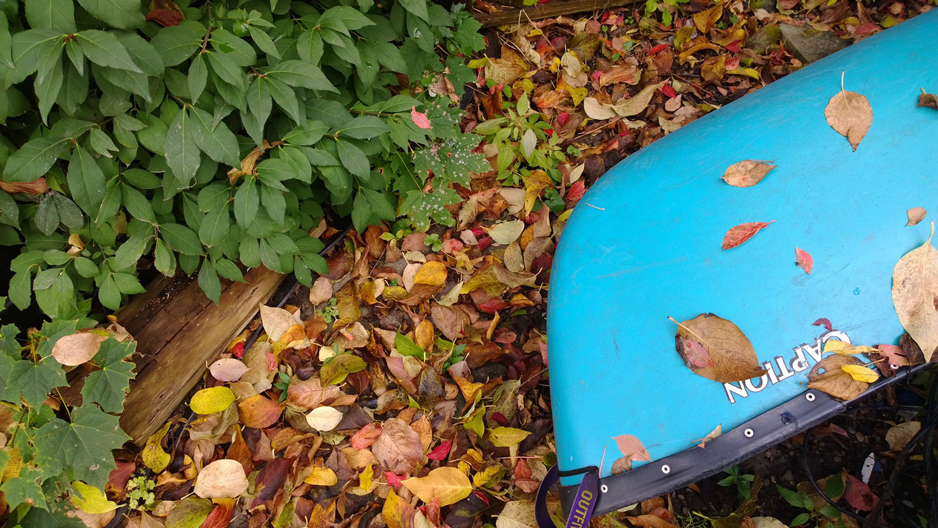 The detail and sharpness of the leaves and water in this shot on my back deck reveals the quality of the Zeiss lenses used in this camera. The subtle range of colours are close to what I saw. (100 ISO). 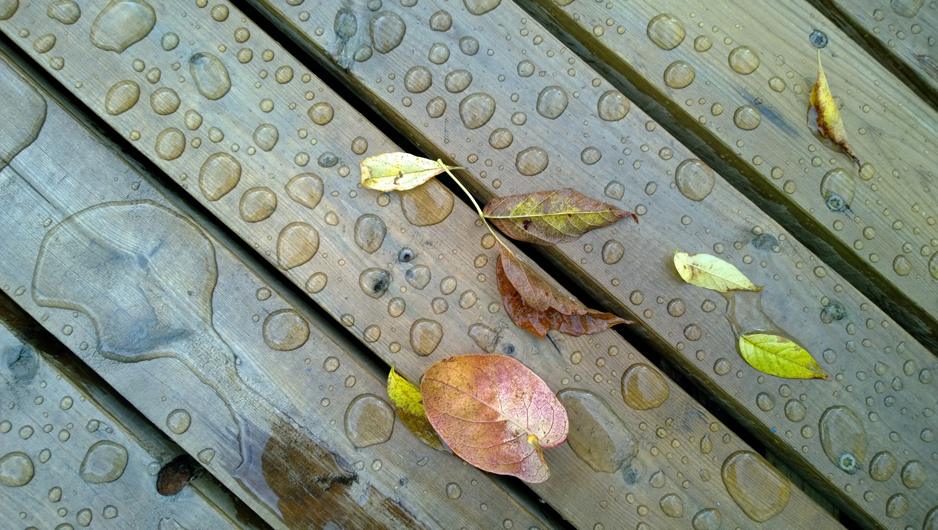 The sensor in this camera also nails low light photography with ease. I love shooting at night, and the Nokia didn’t flinch in tough, contrasty lighting conditions. These 3200 ISO photos looked great, which allows me to raise my low-light photography to another level.

Taken on Spadina Ave. near Dundas St., the right side of this comparison photo on the right was shot at 3200 ISO, with exposure compensation of +.3 to balance the bright restaurant sign. On the left I used some selective dodging around the walking figure to see how image quality holds up when the shadows are brightened. 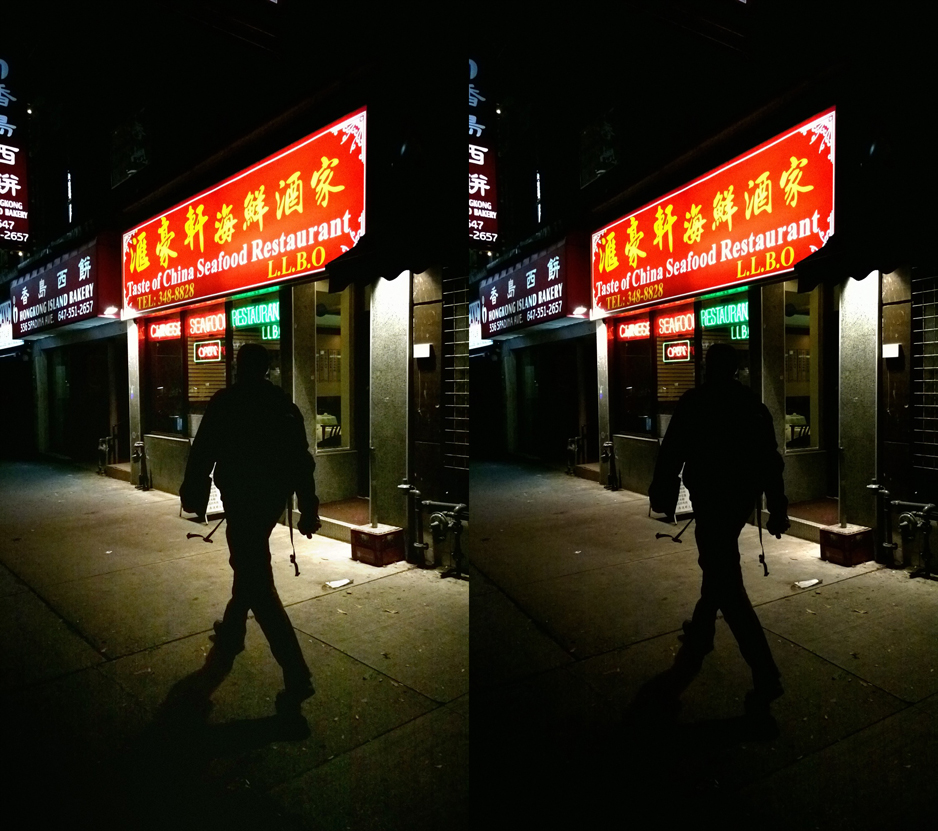 Chinatown at night is always a colourful place, more so after rain has fallen. This was a good test to see how the camera handled mixed street lighting and harsh lighting at the Spadina streetcar stop at Dundas St. This photo came straight out of the camera with no levels adjustments, 800 ISO. 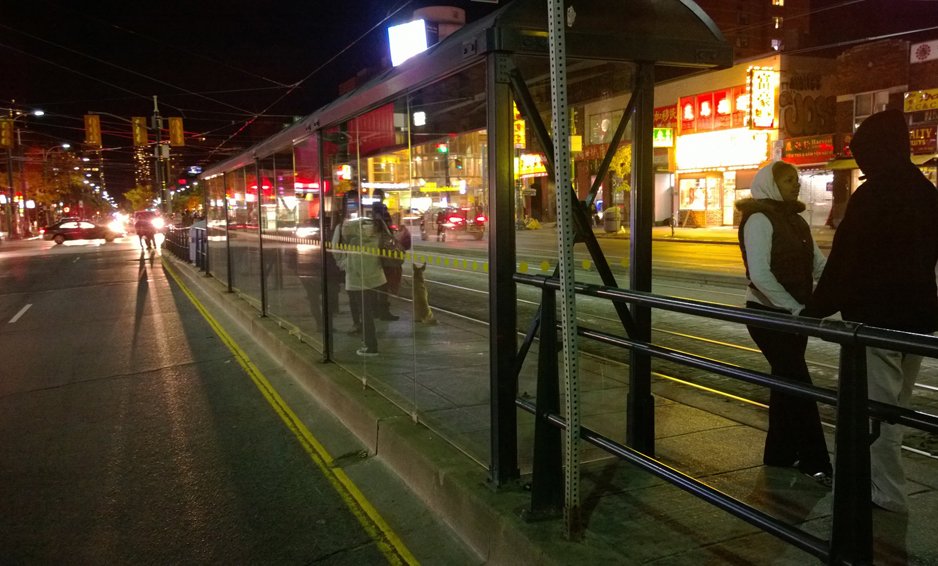 Here, details of diners and the interior of this brightly lit restaurant are retained while the steetscape on St. Andrew St. is still viewable and doesn’t fall into ugly shadows. (1600 ISO.) 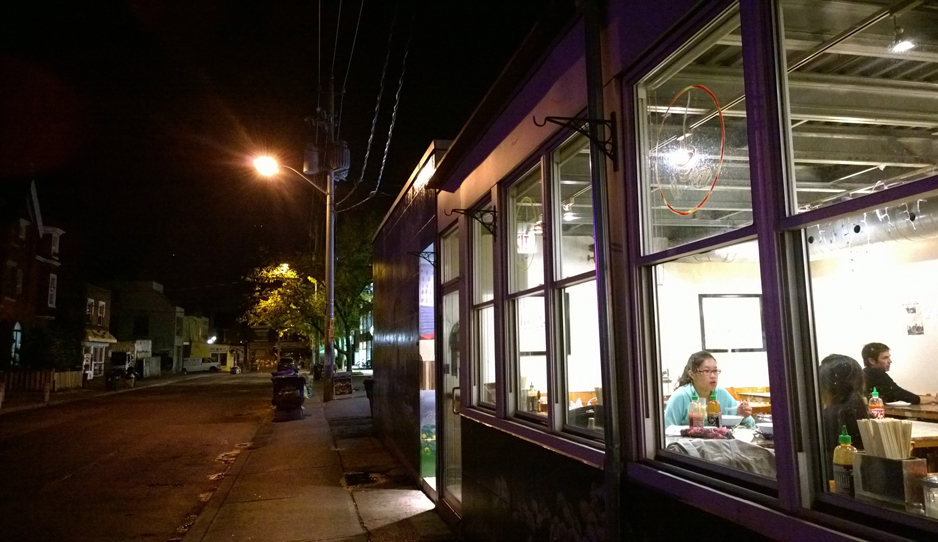 The 1020 takes massive images (one was 90 megabytes when downloaded) with that 41 megapixel sensor. I found it took some time for the camera to process each shot, causing some lag before I could snap the next photo. For how I shoot, it was a bit uncomfortable having to wait several seconds... I saw great photos pass by while waiting. This probably won’t bother most users, but it’s something to weigh.

Stopped in traffic, I quickly grabbed this shot of Portland St. in downtown Toronto. This 100 ISO image came straight out of the camera with no levels adjustments and very minor cropping. 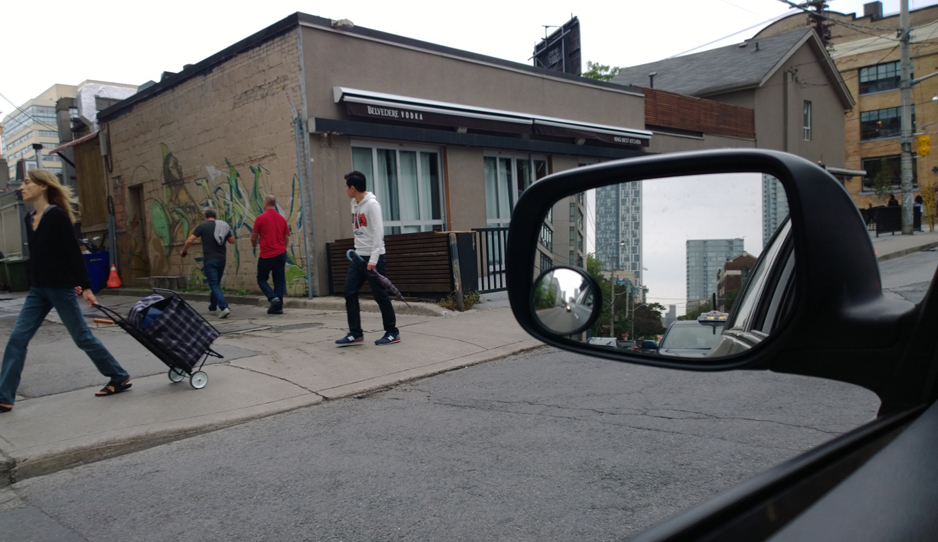 While image quality and sensor size are important factors, how a camera handles is just as important as it directly affects the photographs taken. With the 1020, there’s a great add-on accessory that adds a small grip with a built in shutter release. With this attached, one would think they’re using a point and shoot instead of a cameraphone. The shutter release button also makes it easier to pre-focus (taking away the need to hunt around for the auto focus system) which will allow for more spontaneous photography. The grip also houses an extra battery for longer life. 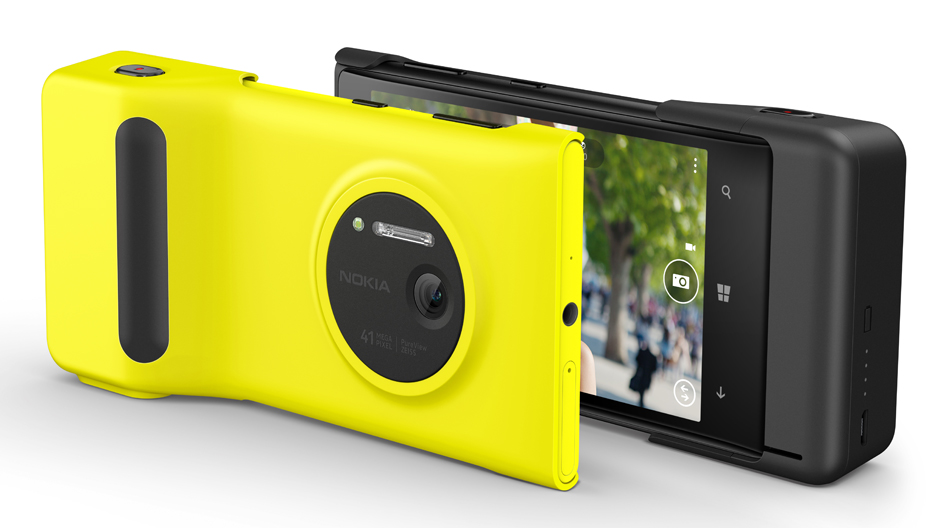 A note on durability

The first thing one notices when using the Nokia is the huge LCD screen. My iPhone screen looked inadequate compared to the Nokia. However, my iPhone has fallen out of my pockets or camera bag often enough for me to really appreciate the build quality. The Nokia, not so much. It slipped out of my jacket pocket, landing on a corner of the accessory grip. That pretty screen - which stretches very close to the edge of the frame, leaving very little bezel for cushioning - had a jagged spiderweb crack in it, with a few lines reaching across the whole screen. Was it this particular unit, or is it just not a durable camera phone? I hope it’s just a one-off occurrence. 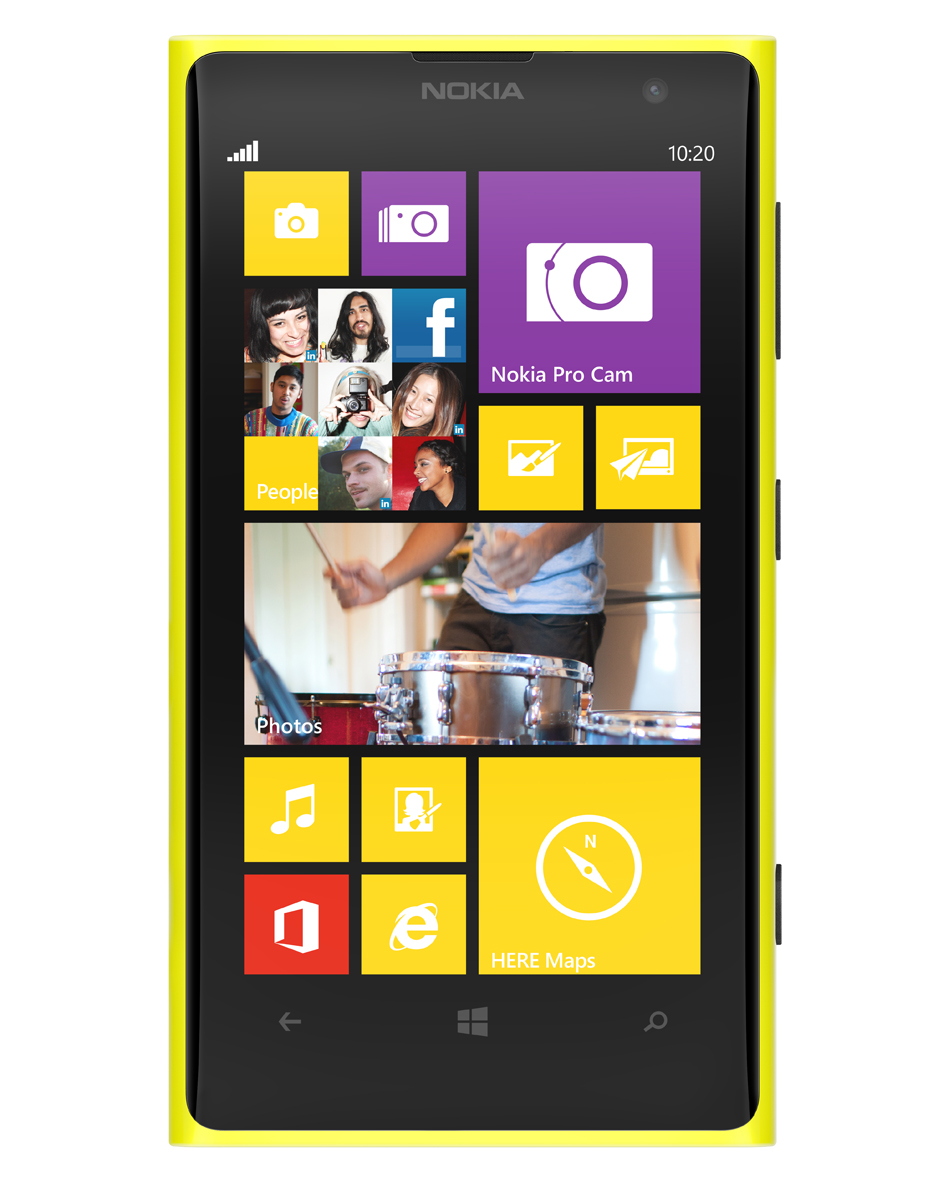 After using the Nokia on and off for a week, I ended up wondering if this was a camera that just happened to have a built in phone. When people noticed I had a Lumia 1020 (it was unavailable at the time), they were interested in my impression of it. Several people were looking forward to its release in Canada (now available at Rogers and Telus, $199 with a two-year plan or $725 unlocked).

A few said this would be the next phone they would buy, and indeed the camera played a big part in that decision. If it were cheaper to purchase it unlocked, I could see people buying it without a wireless data plan, strictly to use as a camera and then dropping into a Wi-Fi-enabled coffee shop to upload photos.

Well, that’s our test run, but if you liked that you should also check out the pics photographer Stephen Alvarez took of the Grand Canyon for a promotion with National Geographic and Nokia. Below are some of those images, you can find a link to his full gallery here here. 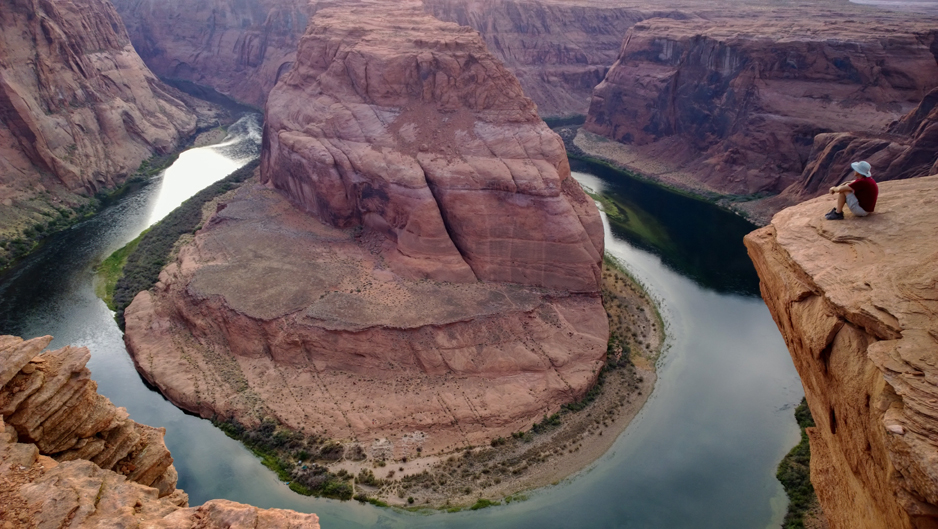 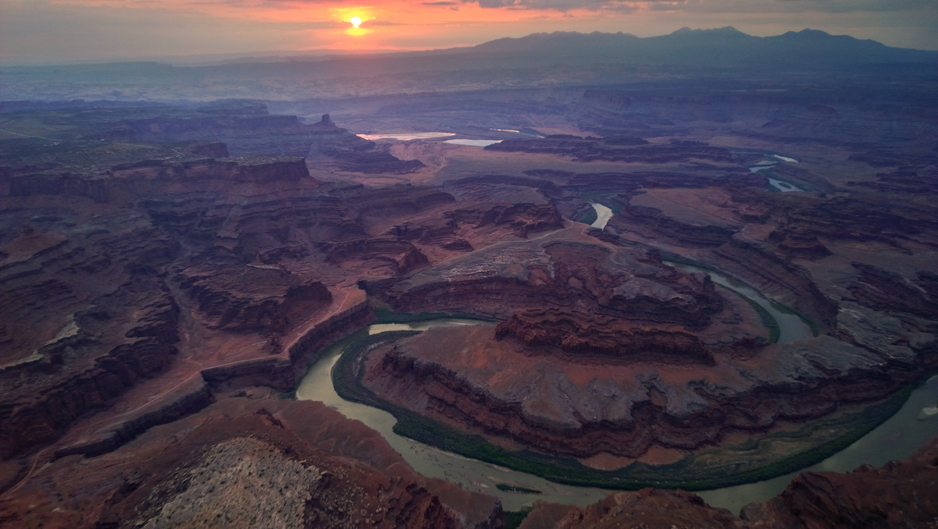 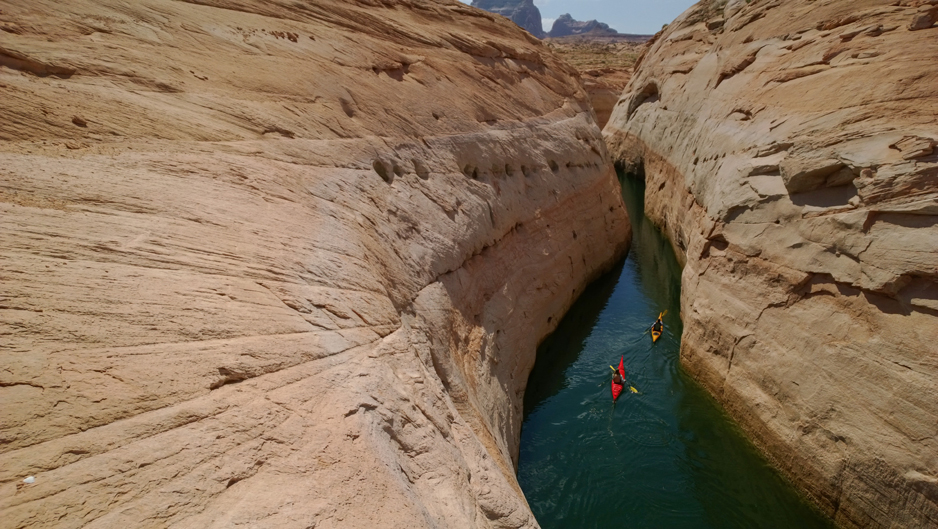