The summer is more than halfway over, but there is something gnawing at me about one of the hottest consumer tech stories of these warm months. The Apple Watch is a flop, and nobody seems to want to admit it.

As of Aug. 14, the Apple Watch will go on sale at Best Buy in Canada, the first non-Apple store to stock the bauble. I don't recommend buying one for a multitude of reasons under the same theme: It's just not ready.

The tech press has been remarkably unwilling to say what most of us know to be true about all the existing smartwatches: They are expensive junk.

The Globe and Mail wasn't one of the chosen outlets to review the Apple Watch before it went on sale to consumers, so we sat on the sidelines reading a half-dozen glowing mega-essays and otherwise huge content dumps from the technology press extol the virtues of the Watch.

The impression you got was of a device that had some interesting features – notifications, fitness tracking! – that were limited by the very nature of the platform: It's small (and hard to interact with), it's slow (compared to your phone), and it doesn't have a lot of content on it.

When I finally got a chance to review the Watch (Apple recently lent me one of the Sport versions to manhandle for a few weeks), I felt like I'd been sold a bill of goods by my colleagues. Every time I wear it I come away deeply disappointed. The Globe ran a piece by Ray Sharma (Why I got rid of my Apple Watch in less than a week) that echoed a lot of my thinking on why it's not ready. Apple has a long history of first-generation devices that promise more than they deliver, and what the company is exceptionally good at is making the right iterations – particularly with the iPod and the iPhone – to get it right in later versions.

Still, for a long while I thought I must be missing something about this first crack at the Watch. I was, frankly, a little afraid of being that person to write the "hunk of hot garbage" review that would come back to haunt me when the Watch sold its first 10 million devices a few short months later.

But now it seems that's not going to happen. Apple's last earnings report showed worrying signs that Watch is not taking off. As I wrote at the time, it may not be dead but it's doing far worse than the most bullish predictions and worse even than a lot of the negative views. Apple won't say specifically how many units have shipped, though the educated guess is something close to three million but far fewer than four. Apple, for its part, says it is happy with the progress. Considering this is essentially a companion device to a marketplace of hundreds of millions of iPhone owners, those numbers suggest consumers aren't racing out the door to buy.

I don't think anyone has identified the "killer app" of the smartwatch. Apple itself spends a decent amount of time touting the health benefits of the quantified self, but the Watch-as-fitness-band has a few major drawbacks: It is heavy, fragile and much more expensive than other similarly functioning wearables. It's also laughably inaccurate: My Watch frequently tells me I've reached my "stand goals" after I've been sitting at my desk all day.

I have read a number of pieces about app developers struggling to find uses for the Watch, much of which is blamed on Apple's decision to cripple the software development kit it provided to third parties. At launch, developers could not access the digital crown, the microphone, the accelerometer or the "taptic engine" (the vibrating doohickey). But the inability to have third-party apps use the native processing power of the Watch was the most critical flaw. The result is that the 8,000 or so apps available for the Watch are almost uniformly slow and janky.

For instance, I have never managed to get Glances working adequately with any third party app. They fail to load or are slow to refresh. Apple's own notifications are laughably slow, and the worst is the day-old text that you get when you strap on your watch in the morning. It's an almost daily reminder that this thing is less useful than your phone.

Some of this may get better in the fall when Watch OS 2.0 ships, but I still wouldn't recommend buying a Watch at that time. By fall we'll be beyond the half-way point in Apple's traditional annual refresh cycle for its hardware. Even if version two of the Watch doesn't come out until fall 2016, you can bet that whatever improvements Apple makes (some suggest a camera sensor) will expand the horizon of what it can do.

I don't mean to pick solely on Apple Watch – Android Wear is also a depressing kludge. The hardware I have tried from Sony, Motorola and others was lacking in several ways. Wearability seems like an issue every designer struggles with: The clasps catch, the watch bodies are huge and are often ill-fitting on my not-so-tiny wrists.

But the most frustrating experience on all devices has been using the voice controls. A Sony smartwatch I tried out really struggled with OK Google commands, particularly with either my name or the name of my street when I tried to use the navigation or messaging features. "Xi jiang" or "cinnamon" seemed to be its best guess, and I had to manually choose the address from a list. Siri is marginally better, but it's really a "smarter-than-a six-year-old" type prize with the weak competition. Plus, I remain unconvinced that in the future humans will suddenly embrace shouting at our wrists while on a crowded train or plane, or even a quiet street.

The other troubling feature of all smartwatches is security. HP recently released a study that claimed almost all smartwatches are horribly insecure, though they didn't call out Apple specifically. Back in 2014, researchers showed it was relatively easy to brute-force hack the Bluetooth connection in an Android Wear watch. The danger isn't that your step count will get leaked, but that access to the watch makes the contents of your phone accessible.

The hype around the Watch, "Apple's most personal device," to my mind has gone unfulfilled. It hasn't made the case for its existence the way the smartphone did. Putting the Internet in your pocket has changed almost every sector of our economy in one way or another – from music to TV, games to media, education and workplace productivity, even shopping and finance. It rendered obsolete a host of old tech, from stand-alone navigation devices to, yes, standard analogue watches. Putting apps on your wrist hasn't created the same burst of creative destruction. (Note I said apps – there is no Internet browser on Apple Watch.)

Unless we get a revolution in the ease and power of the input and output schemes on wearables like the Watch, I think they will remain in the same category as fitness bands and Bluetooth earpieces: Interesting for enthusiasts and early adopters, but not something the average consumer needs or wants. 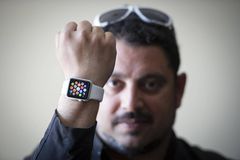 Tech pioneer thinks wearables can offset privacy concerns
June 8, 2015
Follow Shane Dingman on Twitter @shanedingman
Report an error Editorial code of conduct
Due to technical reasons, we have temporarily removed commenting from our articles. We hope to have this fixed soon. Thank you for your patience. If you are looking to give feedback on our new site, please send it along to feedback@globeandmail.com. If you want to write a letter to the editor, please forward to letters@globeandmail.com.
Comments