Retooling the EA Sports' NHL games franchise for next-gen video game consoles wasn't hassle-free. The title may have updated some critical features, but it also left out two important game modes that have left fans confused and angry.

On August 19, Sean Ramjagsingh, the producer for NHL 15, revealed in a blog post that at launch, the next-gen versions of NHL 15 will be missing Online Team Play (OTP) and EA Sports Hockey League (EASHL). The former lets players control a single player in a game with up to 11 others, while the latter, which is a layer on top of OTP, has players competing in a league against others from around the world. Predictably, NHL fans flipped out.

"It was really just a factor of some unforeseen hurdles that we came across during development that took up some of our development time," Mr. Ramjagsingh explained in an interview. "We pushed as long as we could until we had to shut the door on what we delivered for launch."

Even taking into account the missing modes, Ramjagsingh called the PS4 and Xbox One version of the game (released September 9) "full featured." The key, he says, was creating a foundation for taking the NHL franchise onto the next-generation consoles, which required a greater focus on the "core gameplay experience."

The game's developers in Burnaby are currently working on OTP and the plan is to release that mode as a software update when it's ready. EASHL could also conceivably be added as a later update, but Mr. Ramjagsingh wouldn't commit to that. "The first piece of it is the Online Team Play and then we'll see after that what makes the most sense."

Mr. Ramjagsingh says he's building an EA Sports Hockey League Committee to collect feedback so the league will come back "in a way that's bigger and better than we've had it in the past."

So, what took up all that development time? In part, it was a complete rethinking of the way the puck moved in EA's game.

A puck is not a ball. It seems like a dumb thing to say out loud. You don't even have to be a hockey player to list the differences between pucks and balls. A puck is a disc (a cylinder, to be perfectly accurate) while a ball is a sphere. Pucks are made from vulcanized rubber but balls can consist of many different materials. Pucks slide, balls roll.

And if you've played a hockey video game, you'll know that when you dump the puck into an opponents end, it always bounces into the air. That's because in titles like EA Sports' NHL games, the puck may look like a puck, but as far as the game's programming is concerned, it's actually a ball.

But here's something that hockey players know better than anyone: when a puck is shot from centre ice into the corner of a rink, punks don't bounce. Pucks ricochet and carom and can come off the boards at sharp, weird angles. But they don't bounce. Balls bounce.

"The reason why our puck in the old consoles was a sphere as opposed to a cylinder is really because the consoles didn't have the power to handle all the math required to run proper physics," Mr. Ramjagsingh says.

The job of solving the math problems to create a real puck in NHL 15 was handed to Michele Petteni, who worked as a particle physicist on Simon Fraser University's ATLAS experiment at CERN's Large Hadron Collider near Geneva before taking a job as a software engineer with EA Sports. ("It was a new opportunity to do physics, just not at a quantum level," he told Symmetry Magazine. "We try to keep quantum mechanical effects out of video games.")

The new physics engine built for the PS4 and Xbox One versions of NHL 15 gave shape to the puck and also to the virtual players. "The players used to be like the Michelin Man if you stripped away their jerseys," says Mr. Ramjagsingh, but in the new edition they have defined bodies, equipment, and even jerseys.

The change in the players and the puck means plays on goal are unlike anything seen before in a hockey video game he says, because "the same shots you were taking in the older versions are now hitting the goalie and bouncing differently, more realistically."

Pucks hit a goaltender's jersey, then the equipment under the jersey, which are all being modelled accurately. It then reacts based on its speed and the angle it hits the goalie. "Without even adding any new goalie animations, the puck is going places it hasn't gone before," says Mr. Ramjagsingh, "which is causing the goalie to use animations that have been in the game for a long time but were never called because the puck would never go there."

The result is that NHL 15 on PS4 and Xbox One feels "more organic, more natural." And it means the games being played in the hockey simulation are even more realistic than ever before.

"What we're delivering with NHL 15," missing modes and all, "is something we're really proud of." 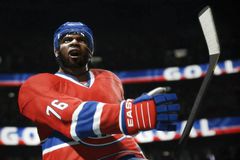 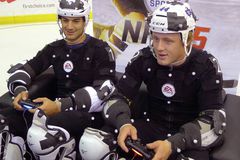