I had hoped that by the time Hugh Thompson's first Digital Home feature ran on Globe Technology, I'd have switched from cable to over-the-air (OTA) television and that I would have a first-person account to share.

My grand plan to cut the cable cord has yet to transpire. I'm assuming some of the challenges I've faced in deciding to go OTA are similar to others, so I'll go ahead and recount:

On a perfect Saturday morning in late August, Eric Skura from V&E Antenna Inc., dropped by my house in Ajax, Ont., to answer some questions I had about OTA. (Eric is the 'E' in V&E, Vince is a former partner, now gone, but Eric has kept the name.) Eric is an amiable guy, a former Canada Post carrier who got into the antenna business 25 years ago. Back then, consumers were discovering cable and abandoning their antennas. He'd spot the occasional redundant antenna as he walked his route and he would offer to take it down. Today, he said, his business installs at least two antennas a day, and the pace is picking up.

I'd considered making the switch for a while, as my household is well-suited for it. My wife spends most of her evenings working on a laptop in front of the TV, watching dance shows and evening dramas such as Grey's Anatomy and Desperate Housewives, which are carried on Canadian and U.S. networks. The only things I watch on TV are baseball and movies, but a lot of the baseball is on MLB.com's streaming service. I see the Phillies in the kitchen on the iPad, the Red Sox on the PS3 in the living room and the Twins on my desktop. The kids watch Family Channel, CBC and PBS. All in all, we pay more than $80 a month for television, bundled discounts included. While we'd be giving up a few channels, streaming services such as MLB and Netflix would go a long way toward making up for them.

While standing at the back of Eric's cargo van, the doors open and equipment neatly organized inside, he told me about the packages V&E offers to its residential customers.

The premium wide-band package includes two antennas on the roof - a four-bay and an eight-bay - directed at Canadian and U.S. transmitters that pulls in between 18 and 22 channels, he said. One is aimed at downtown Toronto to grab signals from CBC, CTV and Global, and the other at Buffalo to pick up the U.S. stations. V&E recommends the premium package for homes with two or more TVs and the price he quoted was $750, taxes in. That covers all equipment, including a tripod, bipod or chimney mount, coax cable and one year parts and labour.

The other package includes an antenna that can rotate and pick up signals in any direction. It works best with a single TV (an antenna pointed in one direction would deliver a clear channel to one set and a fuzzy channel to another), so it's not something I'm interested in. That package, Eric said, retails for $850.

I'm enthusiastic about the possibility of switching, but after speaking with my family we decided to delay for a few reasons. One, I wanted to wait until the Blue Jays had finished playing. MLB.com blacks out local games so when we get rid of cable, I'll only be able to listen to live games or watch the Jays after their games are over. I don't mind that. In fact there's little better than working in the garage on a Saturday, cold beer in hand, listening to a ball game.

The kids would have to get used to new shows. They're really into programs on Disney's Family channel - Hannah Montana, Suite Life and Sonny With a Chance, all of which would be lost.

I was also concerned about how the antennas would look on the roof. While the sightlines are not very exposed from the street, it's a pretty big rig to throw up there.

Eric agreed that many customers wonder the same thing. "Nobody is happy to put something on their roof that doesn't look good, but no one has ever called to say, 'come take it down.' "

And, of course, there's the price tag. While I know I'll make up the cost of the installation over time, and save beyond that, we decided to start putting money aside for the switch rather than add to my debt load. So for the time being, we save, and I grumble every month when the Rogers bill arrives, waiting for the day it drops by $80. 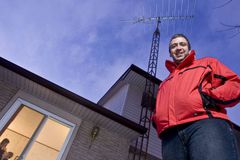