Giving in to an insurmountable urge to explore a long list of travel destinations and spend more time with family, the Canadian behind Google Inc.'s finances is heading into early retirement.

Patrick Pichette, 52, who has served as the tech giant's senior vice-president and CFO since 2008, explained his decision via Google Plus after a regulatory filing revealed the impending change at Google's head office Tuesday.

Mr. Pichette said he his wife, Tamar Pichette, can no longer justify putting off grabbing their backpacks and hitting the road. He said he's looking forward to "a perfectly fine mid-life crisis full of bliss and beauty."

The CFO's early retirement was spurred by a question his wife asked him as they stood atop Mount Kilimanjaro on the couple's trip to Africa last fall.

"Tamar out of the blue said 'Hey, why don't we just keep on going.' Let's explore Africa, and then turn east to make our way to India, it's just next door, and we're here already," Mr. Pichette said.

"Little did she know, she was tempting fate," he added.

Though he'd dismissed the idea initially, Mr. Pichette began to feel the pang of adventure when he got back to work, and he just couldn't come up a reason to delay seeing India, Antarctica and a whole host of other places any longer.

With roots in a variety of Canadian businesses, the Montreal-born CFO is one of the highest-level Canadians in the tech industry. He spent the past seven years guiding Google's finances through the 2008 downturn and into the new mobile Internet landscape. Google's share price has more than doubled under his tenure and the company has acquired a significant cash pile of more than $65-billion (U.S.), according to Bloomberg data.

Prior to being brought on at Google, Mr. Pichette spent seven years at BCE Inc., joining the company in 2001 as an executive vice-president in charge of planning and performance management. He served a brief term as Bell Canada's CFO from 2002 to 2003 and was president of operations of Bell Canada from 2004 to 2008. (BCE owns Bell Canada as well as 15 per cent of The Globe and Mail.)

Mr. Pichette began his career as an associate at McKinsey & Co.'s Toronto office in 1989. He departed the firm to become vice-president and CFO of Toronto-based Call-Net Enterprises Inc. in 1994, but returned to McKinsey in 1996 after Call-Net was acquired by Rogers Communications Inc.

In addition to working at Google, Mr. Pichette currently sits on the board at Bombardier Inc. and serves as a member of the company's audit committee.

Mr. Pichette attained a BA in business administration from the University of Quebec before attending Oxford University as a Rhodes Scholar, where he earned an MA in philosophy.

Though the CFO's departure from Google has come as a surprise, his split with the company seems to be amicable. Responding to the news on his own Google Plus account, CEO Larry Page expressed his thanks to his outgoing CFO.

"Patrick has been a joy to work with and I wish him all the best on his new adventures," Mr. Page said.

Mr. Pichette will stay on at Google in the coming months to help find and train a new CFO, and plans to "leave the door open to serendipity" after he exhausts his list of adventure destinations and begins considering next steps. 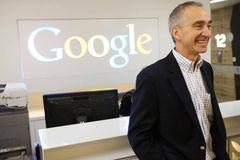