Efforts to combat illicit mining of coltan are gaining traction, as politicians in Canada and other Western governments look to establish tough penalties against the practice.

Coltan is vital to the production of electronic devices, but mining of the valuable mineral, and other resources, in the Democratic Republic of the Congo has helped fuel myriad atrocities in the country, including massacres and mass rape.

Politicians and government representatives from Germany and Belgium have spoken with New Democrat MP Paul Dewar about a bill he tabled in the House of Commons to combat the mining of conflict minerals in the Great Lakes region of central Africa, specifically in Congo.

The meetings come as Liberal MP Borys Wrzesnewskyj told The Globe and Mail he plans to introduce a private member's bill that would make it a criminal offence in Canada to use minerals that originate in conflict mines.

"What happens in places like [Congo]is criminal," Mr. Wrzesnewskyj said in an interview. "It's horrific, and if you're facilitating that, it's absolutely unacceptable ... behaviour. I'm certainly hoping that the introduction of this sort of legislation no longer makes it possible for people in the corporate world to turn a blind eye to this."

Mr. Dewar tabled Bill C-571, the Trade in Conflict Minerals Act - which seeks to force Canadian companies to avoid purchasing raw minerals used in devices such as computers and cellphones from conflict-zone mines - in late September, as the U.S. government also moved to impose tough new rules on the use of conflict minerals. Mr. Dewar met with Belgium's ambassador to Canada in mid-October, and with a visiting opposition German legislator on Monday to discuss the issue.

"There's an absolute interest, because this is a hot topic in Europe," Mr. Dewar said in an interview. "They said they're very interested in this ... there's an opportunity here not just to do a one-off with one country. There's a comprehensive approach. And they get that. This is something that clearly needs to be done at a multilateral level."

Samantha Nutt, founder and executive director of War Child Canada, said the conflict-mineral trade needs its version of the Kimberley Process, the sweeping guidelines introduced by the United Nations to help stamp out the trade of so-called blood diamonds.

"I think it's going to require a tremendous amount of initiative that is going to have to ultimately come from consumer momentum, and from the industry itself," Ms. Nutt said. "It's not enough to say that in the areas where there are mines, they are building schools and providing health care. It might make people feel better to know that, but it's not changing the abuses that are happening."

In a letter to The Globe, the president of the Belgium-based Tantalum-Niobium International Study Center, a mining industry group, said the industry supports due diligence efforts such as those outlined in Mr. Dewar's bill. But he rejected "the erroneous presumption that coltan is anything more than a very minor contributor to the ongoing conflict in the eastern Democratic Republic of the Congo."

The interest in Mr. Dewar's efforts in Canada, which have Mr. Wrzesnewskyj's support, comes as the United States holds consultations on the sweeping Dodd-Frank Wall Street reform act, which has a provision that will force companies that are publicly traded in the U.S. to disclose where they buy their minerals.

"My government would welcome every attempt to arrive at more and better multilateral arrangements [on conflict minerals]" Bruno van der Pluijm, Belgium's ambassador to Canada, said in an interview. "These things are well identified - in the United Nations, in the OECD in Paris, to name a few. We would look forward to more collaboration with Canada."

Any Canadian proposal would still likely face a long road before becoming law. Parliament recently voted down bill C-300, which would have introduced sweeping corporate social responsibility rules on Canadian miners. Both Mr. Dewar and Mr. Wrzesnewskyj say the proposed conflict minerals act could face less resistance because it deals with a specific topic in a specific region.

In the U.S., the Dodd-Frank clause on conflict minerals is lodged with the powerful Securities and Exchange Commission, the national U.S. financial regulator. Because of this, companies are taking it seriously, experts say.

"The key difference in Canada is that we don't have a national securities regulator like the SEC; that's why the Harper government trying to bring in a national regulator is quite welcome news" said Alan Martin, research director with Partnership Africa Canada, an Ottawa-based non-group that was instrumental in helping advance the international Kimberly Process.

Mr. Martin noted that large Canadian companies listed on U.S. exchanges, such as BlackBerry-maker Research In Motion Ltd. and Barrick Gold Corp., will be subject to the Dodd-Frank act's provisions.

earlier
Will Canada do anything about conflict minerals?
December 6, 2010 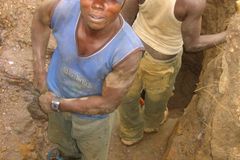