Adam Adelman was once a new-media and technology analyst, scrutinizing the latest trends for hedge funds and investment banks. Now, he's betting his own startup won't find itself in tech's unforgiving dustbin.

His company is Montreal-based Mighty Cast, a four-year-old firm that develops wearable technology and software platforms. On Thursday at the Consumer Electronics Show in Las Vegas, it will unveil a sales-ready, programmable wristband called Nex Evolution and announce a partnership with Google spinoff Niantic Labs that could cement its prospects for years to come.

"We're seeing a huge interest from augmented-reality companies that want to [improve their offering] through wearables," Mr. Adelman said, adding the Ingress agreement is the first of several gaming deals Mighty Cast will make public over the next several weeks.

The company is entering a wearables market that's generally on the rise, although success continues to prove elusive for some manufacturers. Basic wearables such as Fitbit fitness trackers have proven their mass appeal, but more expensive and complex devices such as Apple Inc.'s smartwatches continue to trail initial sales expectations. Mr. Adelman's gamble is that his $79 (U.S.) wristband will appeal to a range of consumers at a price that won't break the bank.

"Smart wearables [including smartwatches] have been down in recent quarters but clearly not out," said Ramon Llamas, a specialist on wearables with technology market-intelligence firm IDC. "As users' tastes change, so will their needs. That's the opportunity for smart wearables with multifunctionality and third-party applications, both for consumers and business users."

Nex Evolution is a light wristband with five touch-sensitive buttons called "mods" that communicate through vibration and light patterns. Each mod can be programmed and reprogrammed to carry out potentially thousands of functions such as controlling your Spotify music, turn on your coffee maker or alerting you every time a friend is nearby. It also tracks your steps, calories and distance as if it were a fitness band.

The idea is to give buyers a "blank canvass on their wrist" where they can create their own experience rather than relying on an Apple or Fitbit to create it for them, Mr. Adelman said. He said current wearables amount to either health bands or smartwatches, which are little more than glorified cellphones on your wrist. "We haven't seen anyone do anything, in our opinion, very disruptive or creative," he said. He believes Nex band will change that.

The deal with Niantic, publisher of Pokemon Go, will see Mighty Cast supply an accessory band for Niantic's other popular augmented-reality mobile game, Ingress. The wristband will have all the same functionality as a regular Nex Evolution band with additional programming for Ingress players, giving them an enhanced gaming experience.

Making a wearable band wasn't Mr. Adelman's original plan. After developing some expertise as media-content producers, he and his wife first pitched focus groups on the idea of a science-fiction fantasy story that involved a group of teens and a magical charm bracelet. Focus group participants liked the story, but they liked the bracelet even more and wondered if it could be brought to life. And so Mighty Cast was born.

The company developed a beta version of the Nex band, which received a "Reader's Choice Award" for offbeat product of the year in 2013 from consumer electronics Web magazine Engadget as well as a CES innovation award. It then refined the China-made band to make it adjustable and less bulky.

The biggest thing Mighty's team learned through testing, however, was it didn't need to find the perfect software application to marry to its device. It didn't need to discover the one key that would keep buyers interested in the band long after they purchased it. In Mighty's mind, that key doesn't exist.

"We were looking for the killer app," Mr. Adelman said. "And what we discovered is that there's no killer app."

Funding to get this far has come from a mix of sources, including money raised from the sale of Mr. Adelman's previous business and backing from venture investor Leo Capital Holdings. The company has also tapped government tax-rebate programs.

Still, the odds remain stacked against Mighty Cast. Rivals such as Samsung and Microsoft are struggling to create popular and accomplished wearable products after years of trial and error. How far a Montreal startup of 12 employees can push the envelope, whether it can really turn a fictional charm bracelet into a top-selling tech gadget, remains to be seen. 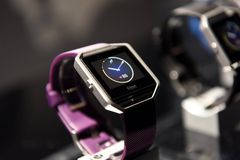