Canadian astronaut Julie Payette is poised to make history again this weekend when she boards the space shuttle Endeavour and is launched into the heavens for the second time in her career.

During her sophomore voyage to space, Ms. Payette will participate in a Canadian first - she'll meet up with Robert Thirsk at the International Space Station, where he's working for the next five months on plans to deploy Canadian robots on other planets.

It will mark the first time Canada has had two astronauts in space at the same time.

"Focus, focus, focus - you've got a mission to accomplish," Ms. Payette, 45, said in a recent interview with The Canadian Press when asked what she'll be thinking about as she blasts off.

Ms. Payette is at the Kennedy Space Center in Cape Canaveral, Fla., this week preparing for the launch with the rest of the seven-member crew after nearly a month of delays.

"She e-mailed me yesterday and she said the workload is more reasonable now because they've been ready for this launch for a while now," Anna Kapiniari of the Canadian Space Agency said Wednesday.

"They're continuing with their training all this week because their reflexes need to be really honed."

Liftoff is set for 7:39 p.m. EDT Saturday, but a forecast of stormy weather may lead to yet another delay.

The threat of showers and anvil clouds drifting within 20 nautical miles of Kennedy Space Center on Saturday means there's only a 40 per cent chance that conditions will be acceptable for liftoff. The forecast for Sunday isn't much better.

The launch will kick off a 16-day construction marathon at the space station. The crew will deliver a new member to the station's six-man team and bring to Earth a Japanese astronaut who's been there since March.

When the shuttle arrives at the space station, there will be a total of 13 people there - the most ever at the orbital outpost.

The Montreal-born Payette brings with her some Canadiana - maple butter, a Quebecois treat she toted on her first trip to space in 1999, and music from Saskatoon country musician Kal Hourd.

Ms. Payette asked for the first copy of Mr. Hourd's album Haven't Even Met Yet , to take with her on the mission, and Mr. Hourd will be in Cape Canaveral to watch the liftoff.

NASA is scheduled to shut down the space shuttle program in 2010, and will use Russian airlifts to the space station until the next generation of U.S. spacecraft is ready in 2015.

The program has been rocked by two disasters in 131 missions. In 1986, the Challenger exploded 73 seconds after liftoff, and six years ago, the Columbia disintegrated upon re-entry of the Earth's atmosphere.

The latest Endeavour launch has been delayed twice so far because of a hydrogen gas leak that has since been repaired. Ms. Payette has always been stoic about the dangers associated with her job.

"You definitely get your things in order, because you do know that is a possibility," Ms. Payette, the mother of two boys, aged six and 15, told Maclean's magazine earlier this year.

"But it's a possibility when you cross the street, so it's a good thing to have your papers in order anyway."

"I'm almost apologetic to say this, but most people here don't have a wide emotional range. It's just the type of people astronauts are; they're required to be level," she said.

"If anything, (the Columbia disaster) increased my willingness, because I knew they would've wanted us to go back up as soon as we were ready and safe to do so, so that this was not all in vain."

"You know, people make a big deal out of it; I sure don't," she told The Canadian Press. "This is not about men and women, it's about getting the job done, and we do."

The station is currently home to Mr. Thirsk, two Russian cosmonauts and one astronaut each from the United States, Japan and Belgium.

On Wednesday, the 55-year-old Mr. Thirsk donned a crimson and yellow convocation cape to accept an honorary doctorate of laws degree from the University of Calgary via video link.

The cape kept floating in front of his face, however, forcing him to remove it as he answered questions from children after the degree presentation.

"This is indeed a special honour for me," he said. "If I can't be in Calgary, I think the second-best place to be is in space."

Mr. Thirsk is the first Canadian to spend six months in space. He earned a mechanical engineering degree from the university in 1976. 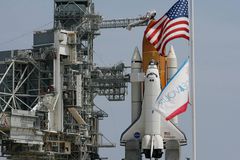