It didn't take long for Aaron van der Reest, a paleontology student at the University of Alberta, to realize he was onto something big.

For an undergraduate project, he had been tasked with opening up and preparing a large fossil that had been with the department since it was discovered in Dinosaur Provincial Park in 2009. The fossil, still encased in a massive slab of rock, had not been a high priority because it was clear that its head and forelimbs were missing. It was up to Mr. van der Reest to see what might be left.

"I started in the tail area," he said, gesturing to a whip-like train of interlocking bones. "Twenty minutes into it, I hit this black area here, and that turned out to be feathers."

Now, after two years of painstaking preparation, Mr. van der Reest finds himself the lead author on a spectacular find. The fossil turned out to be an example of a feathered dinosaur known as ornithomimus, whose name means bird mimic; it lived some 75 million years ago and stood about two metres tall. Although the species is known from previous discoveries, Mr. van der Reest's specimen is so much better preserved than others that it promises to shed new light on the origins and the purposes of feathers in both dinosaurs and early birds. The find was published Wednesday in the journal Cretaceous Research.

"It's drop-dead gorgeous," said David Evans, curator of vertebrate paleontology at the Royal Ontario Museum in Toronto, who was not involved in the discovery. "It is the most complete feathered dinosaur specimen found in North America to date."

Although the first ornithomimus fossils were found more than a century ago, the species is primarily known only through bones. Mr. van der Reest's specimen is one of only three that show signs of feathers. Thanks to the relatively undisturbed river bed deposit in which it was fossilized, the distribution and structure of the creature's feathers are revealed in exquisite detail, as well as a patch of fossilized skin around the legs where there are no feathers at all.

This has allowed Mr. van der Reest and his co-authors to posit that the ornithomimid's feathers were used to regulate body temperature. Just as ostriches do today, the dinosaur could have used its feathers to retain heat or allow heat to dissipate from exposed skin as needed.

Ornithomimus did not fly and its feathers lack the hook-like structures that help keep bird feathers stiff and air-resistant during flight. The basic structure of the dinosaur's feathers and how they attached to its body again bear a strong resemblance to what is found in ostriches.

Birds are thought to have evolved from a different line of dinosaurs than ornithomimus. Rather than indicating direct ancestry, the new fossil suggests that many features recognized in bird feathers today were present long before, in a common ancestor to both ornithomimids and birds. Together with fossils found in China that date back to a similar period, the new discovery promises to clarify how and when such features emerged.

"At the end of the day, we don't get all the answers from one fossil. It's about putting together all the pieces," said Luis Chiappe, an expert on feathered dinosaurs and the director of the Dinosaur Institute at the Natural History Museum in Los Angeles. The new find is an important one, he said, because it is likely to yield rich details with further study. That may include information about pigmentation that would hint at feather colour and the potential for the feathers to be used for display among dinosaurs.

Mr. van der Reest will be the one to conduct the research, and he comes to the task unusually well qualified for an undergraduate. Now 34, he has more than ten years of experience as a technician working with dinosaur fossils in museums in Canada and the United States. He expects to work on the ornithomimus for several more years as he continues with his academic work.

"This is my baby. I get to go as far as I can with it," said Mr. van der Reest. He added that he's dreamed of working on such a find since he was a teenager growing up in Whitby, Ont., and volunteering at the ROM. 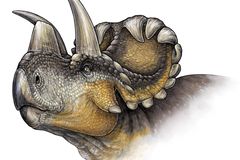 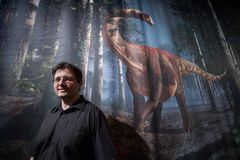