If Avery Broderick's wishes come true, the next 10 days will bring something new to humanity's view of the universe. For the first time, the University of Waterloo physicist says, there could be "visceral, direct evidence that there are monsters in the night."

The monsters Dr. Broderick has in mind are supermassive black holes: terrifying giants that lurk in the hearts of galaxies, including our own, where they can devour stars and interstellar gas like cosmic vacuum cleaners.

Fortunately, Earth is in no danger of encountering such a lethal entity. The nearest one is at least 25,000 light years away from our solar system's quiet celestial suburb. But astronomers have long known that something very dark and heavy is sitting at the galactic centre. Indirect evidence points to a black hole that is more than 30 times the sun's diameter and a staggering 4.3 million times the sun's mass. The extreme gravity of such a dense object would be enough to trap light as well as matter. Falling into it would be a one-way trip, even for a laser beam. (Hence the term "black hole.")

Now, a team of scientists, including Dr. Broderick, is hoping to catch a glimpse of the black hole at the centre of the Milky Way. Their aim is essentially to take a picture of its dark circular rim – the point of no return that physicists call the event horizon – in silhouette against the glowing gas that swirls around it. If the effort succeeds, it could provide a crucial test of Einstein's general theory of relativity as well as offer a direct look at one of the most extreme environments in nature.

"We have every expectation that we are just going to get fantastic data," said Dr. Broderick, whose work on the project is supported by the Perimeter Institute for Theoretical Physics.

The team members' confidence stems from the increasingly powerful tool they are using to peer at the galaxy's dark and elusive heart. Dubbed the Event Horizon Telescope, it is actually a network of radio dishes spread across the globe. Together they exemplify the adage that the sum is greater than the parts.

Radio waves offer the only way to observe the environment around the Milky Way's giant black hole because, unlike visible light, they are not blocked by the obscuring clouds of interstellar dust between Earth and the galactic centre. Even a fairly crude antenna can pick up the static coming from centre of the Milky Way – an observation that was first made in the 1930s.

But turning the galaxy's radio noise into a high-resolution image requires a different technique. If properly calibrated, several widely separated dish antennas can act like a single giant antenna with a much sharper view. In the case of the Event Horizon Telescope, which makes use of antennas in Hawaii, Arizona, Mexico, Spain and Chile and at the South Pole, the project's virtual "dish" is nearly as big as Earth.

The group, led by Harvard University researcher Shep Doeleman, has been working on the project for more than a decade and observing the radio energy emitted by the galactic centre with ever-improving clarity. But on Wednesday, for the first time, they are adding the world's most sensitive radio observatory to their network – the 66-dish Atacama Large Millimeter/Submillimeter Array (ALMA) located on a high plateau in the Chilean Andes.

Until now, the Event Horizon Telescope has been hovering on the threshold of being able to discern the outline of the black hole at the centre of the Milky Way. But the view is still like looking at candle flame through frosted glass. With ALMA on board, Dr. Broderick and others anticipate they will have their best shot yet at resolving the shape of the event horizon.

"ALMA, of course, changes the game," says Ue-Li Pen, director of the Canadian Institute of Theoretical Astrophysics in Toronto, who is not a team member. "I think there is a realistic chance of success."

According to Vincent Fish, a team member and research scientist at the MIT Haystack Observatory in Massachusetts, the group will start gathering data in the early hours of Wednesday and, if weather permits and there are no serious technical issues, gather up to 75 hours of data before their allotted time on all the participating facilities runs out on April 14.

The observations will include not only the Milky Way's central black hole, but one that is 2,000 times larger, and therefore within the project's capabilities even though it is more than 53 million light years away in the galaxy M87.

Together, the two objects make an excellent pair for study, Dr. Broderick said. While our galaxy's black hole is relatively quiet with relatively little matter falling into it, the one in M87 is a galactic gas-guzzler, busy consuming voluminous quantities of material and powering a high-speed jet of nearby particles into intergalactic space.

But while the possibilities for what astronomers may see are tantalizing, the results will take far longer to tease out than a simple snapshot. Far too much data is involved to send across the Internet, Dr. Fish said, so once observations are complete, the first step will be shipping them to the project's headquarters in Massachusetts, and a second site in Germany.

Last to arrive will be the data from the South Pole, which is just entering the long, dark winter season and where planes will not arrive to pick it up until November.

At the earliest, then, it will likely be December before the team knows exactly what it has. If they have succeeded, the first direct image of a black hole's event horizon will come soon after that.

The most important science will come from repeating the observations over many years to track the changes and behaviour of matter caught in the black hole's powerful gravitational field. But with that initial picture, Dr. Broderick predicts our relationship with black holes will change forever.

Canadian astronomers debating over where to focus telescope investments
March 31, 2017 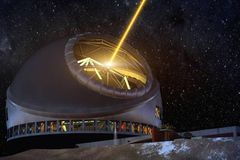 Astronomers excited by bonanza of seven Earth-sized planets around one star
February 22, 2017