As scientists set out late last year to document the effects of the BP oil spill, they found something amazing. It seemed the fish had not heard all the foreboding talk about the oil's devastating impacts. Instead, they were thriving. Trawling surveys done in the fall of 2010 caught triple the number of marine creatures as prior years. With no one netting them, it seemed, the fish were surging.

But now, a year after the Deepwater Horizon explosion that killed 11 and gushed vast amounts of crude into one of the most important marine ecosystems in North America, a more menacing picture is beginning to emerge. Dolphins are dying. So are whales. Some of the area's most iconic sportfish and seafood species are developing ugly lesions. And scientists are warning that the amount of oil left dwarfs the entire Exxon Valdez spill.

It is a mixed message, to be sure. But there is little doubt that on many fronts, the Gulf remains a region in trouble.

How much oil is left?

Depends on who you believe. The National Oceanic and Atmospheric Administration says the "vast majority" of the spilled 4.9 million barrels (780 million litres) is now gone. But more than 100 kilometres of coast remain moderately to heavily oiled, and some university scientists believe half of the leaked crude could remain. One study in late 2010 found that crabs and starfish have died in an undersea blanket of hydrocarbons, in part because only 10 per cent of the oil on the deep ocean seabed had been consumed by microbes. Evidence on the region's coasts also suggests crude continues to sweep ashore.

Ian MacDonald, a professor of biological oceanography at Florida State University, says about a quarter of the oil is still "present as large tar mats and blobs that were either buried in layers in the coastal soils or in the sediments offshore. For perspective, that's about 3.5 times as much oil as was released in the Exxon Valdez spill. So it's still a tremendous amount of material."

What's up with the dolphins and whales?

Some are dying. Between February, 2010, and April 3, 2011, some 406 whales and dolphins were stranded on Gulf shores. Most of those were bottlenose dolphins, and of those, 86 were young dolphins. The number of strandings has been, in some months, more than six times average.

And it's not just dolphins. Sea turtles are also being stranded at high rates. The numbers are "alarming," Prof. MacDonald said. "The dolphins we've been seeing are coastal species, so they are exactly in the area the oil was concentrated."

How about the fish?

It's still too early to tell definitively. Scientists are readying research programs and plan to head out in the next two or three weeks to begin spring population surveys. Similar work done in the fall suggested that the massive fisheries closings had led to a surge in populations of fish, and even tiger sharks, whose populations in coastal Alabama appeared to triple.

Recent data suggest that population is only part of the picture, however. In Louisiana, fishermen are reporting that some of their red snapper catch is infected with what James Cowan, a professor in ocean and coastal sciences at Louisiana State University, calls "severe bacterial infections and lesions on their skin and damaged livers. It's right now about around 10 per cent or less of the fish that are being caught, but the numbers are increasing."

More worrisome: The lesions appear to be spreading to other species, including red drum, coastal sharks and sheepshead. "We're seeing something emerge now that's starting to sort of smell like longer-term impacts," Prof. Cowan said.

What does that mean for the seafood industry?

April 19, the day before the one-year anniversary of the spill's start, marked an important Gulf milestone. On that day, federal authorities reopened the last area that had been closed to fishing. Fishermen can now throw nets over top of the Macondo well if they choose. The U.S. government says its tests have shown no safety concerns, with samples of tuna, swordfish and other finfish "finding no detectable oil or dispersant odours or flavours."

That hasn't helped sales, though. Overall, the Louisiana seafood catch is down about 40 per cent. Oysters are worse; sales were slashed in half last year. Armed with $30-million in BP-funded marketing dollars, the Louisiana Seafood Promotion and Marketing Board is placing its hope in advertising as a way to convince diners to bite back into its product. "The biggest challenge we have moving forward is still perception issues," said Ewell Smith, the board's executive director.

Are the tourists still coming?

Yes, at least in the off-season. The latest numbers out of places such as Gulf Shores, Ala., show that taxable retail sales and lodging rentals are actually up. But that's largely because hotel rates have risen. February hotel occupancy was slightly down, while condos in that month saw occupancy fall by nearly 20 per cent. But since much of the Gulf is a summer destination, the true numbers won't be known for several months.

For those southern tourist spots not on the beach, however, business has been fantastic. Last year, New Orleans saw visitor numbers that were the highest they've been since Hurricane Katrina. And those tourists were shovelling out cash, spending $5.3-billion - a city record. 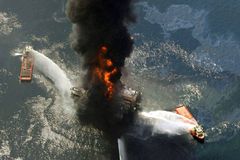