A Canadian-developed vaccine for the Ebola virus has proven to be extremely effective in a full-scale clinical trial, opening the possibility that future outbreaks of the disease can be successfully contained.

The trial, led by the World Health Organization, was staged in Guinea, a country that was ravaged by the Ebola epidemic that swept across West Africa in 2014-2015.

Reporting Thursday in the medical journal Lancet, the study team found that not a single individual among thousands who received the vaccination as soon as they were identified as being at risk of exposure ended up infected with Ebola. In contrast, a control group that was given the vaccine after a three-week waiting period produced 23 infections.

Study leader Marie-Paule Kieny, the WHO's assistant director-general for health systems and innovation, said the numbers suggest that the vaccine, called rVSV-ZEBOV, is likely to be more than 80-per-cent effective when deployed across an entire population.

"We may very well have a vaccine that will ensure we can control any outbreak," Dr. Kieny said in an interview from Geneva.

The vaccine is only expected to be effective against the so-called Zaire strain of the virus that was responsible for more than 11,300 deaths in Western African starting in late 2013 – the worst Ebola outbreak in history. A parallel vaccine is still needed for the Sudan strain, which is more prevalent in Eastern Africa.

The clinical trial, which began in March, 2015, marks the first time any vaccine for Ebola has passed the hurdles required for regulatory approval. Other trials that began around the same time foundered because infection rates in Western Africa were dropping too rapidly by then to provide a statistically significant result.

To overcome the dearth of new cases, the WHO team adopted a "ring vaccination" strategy. The approach was originally devised to help shut down the last remaining clusters of smallpox, leading up to its eradication in 1980. During the WHO trial, only those individuals who were close contacts of a new Ebola case, including family members and neighbours, as well as contacts of those contacts, were vaccinated. Whereas members of a randomly chosen West African cohort might only have a minute chance of contracting Ebola , those in the ring of contacts around a new case would be at much higher risk. This translates into a higher confidence level in results of the trial.

"It was a brilliant study design, given the circumstances," said Frank Plummer, a professor at the University of Manitoba and former scientific director general of the National Microbiology Laboratory in Winnipeg.

Dr. Plummer was running the federal laboratory when scientists there were developing the rVSV-ZEBOV vaccine, based on work by virologists Heinz Feldmann and Gary Kobinger, among others. The vaccine is an altered form of vesicular stomatitis virus (VSV), which affects animals but not people. Thanks to a genetic modification, it carries a surface protein that is identical to one found on the Ebola virus. The protein serves to prime the body's immune system so that it recognizes and attacks any real Ebola it encounters.

"It's like a photocopy of Ebola on the outside but with no Ebola on the inside," said Dr. Kobinger, now the director of Laval University's Infectious Disease Research Centre. The vaccine is owned by the Public Health Agency of Canada and was licensed to NewLink Genetics, a small U.S.-based firm, in 2010, at a time when there was little commercial interest in developing an Ebola vaccine. It was in turn licensed to the pharma giant Merck in 2014, which produced the vaccine for the trial. Had the Canadian lab not already been developing the vaccine, it would have taken far longer to get to a successful clinical trial so soon after the outbreak.

"We'd been working on it for almost fifteen years," Dr. Plummer said. "I think it's a lesson about the value of investigator-driven research." He added that the VSV virus may turn out to be similarly useful as a platform for creating vaccines against other deadly infections.

Dr. Kobinger said that there were also lessons to be learned that could help global heath agencies respond faster the next time there is an outbreak for which there is no available prevention. For example, had human-safety tests already been conducted on the vaccine, a clinical trial could have been attempted months sooner, while the outbreak was still growing.

Dr. Kieny noted that there remains more work to do on the vaccine yet, including establishing how long it retains its effectiveness. This will be key for health-care workers in high-risk areas who may come to depend on the vaccine for protection.

But, at the very least, the spectre of another uncontrolled Ebola outbreak is receding. With an unusually expressive remark for a scientific paper, the title of the WHO study includes a nod to researchers' intense desire to bring a terrifying killer to heel. 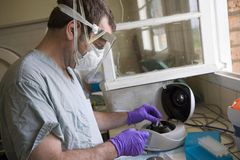