A Mars-bound rocket is set to blast off from Kennedy Space Center in Florida. The "launch window," when Earth and Mars are in ideal positions to begin such a mission, is open from Saturday until Dec. 18.

If everything goes according to plan, a super-sized rover will touch down on the Red Planet next August, after completing an interplanetary journey of 570 million kilometres.

"It is the most complex mission that has ever been undertaken to the surface of another planet," said John Grotzinger, the chief scientist in charge of $2.5-billion (U.S.) rover officially called the Mars Science Laboratory.

Indeed, this rover, which is nicknamed Curiosity, is a behemoth compared to its robotic predecessors. And it's packed with scientific instruments – including a Canadian-made device – that will try to determine whether the barren planet was once capable of supporting life.

Curiosity measures 3 metres in length and weighs 899 kilograms. That makes it twice as long and four times heavier than the twin rovers Spirit and Opportunity that have been on Mars since 2004.

It's so big that scientists at the U.S. National Aeronautics and Space Administration have had to devise a radically new way of landing on Mars. On previous missions, the rovers were small enough to be encased in airbags and they literally bounced along the surface until coming to a stop.

Curiosity will be gingerly lowered on tethers to the surface under a rocket-powered hovering "sky crane" which could serve as a prototype for future landing craft that could put the first humans on Mars.

Planetary scientists have also spent a great deal of effort selecting Curiosity's proposed landing site. They picked a 154-kilometre wide crater called Gale. At its centre stands a 5-km high mountain that is believed to contain a geological record of the planet's early history when it was a warmer, wetter and possibly more hospitable place than it is today.

Dr. Grotzinger said the crater dates back to a giant meteor impact more than three billion years ago. Over time, the crater filled with sediments, possibly deposited by flowing rivers or ancient seas. Once Mars turned dry, relentless winds eroded away most of the sediments, leaving behind a gently sloping mountain of layered sedimentary rock within the Gale crater.

Curiosity will land near the base of this mountain and then drive up the incline, scrutinizing soil and rocks along the way. "As we go up, layer by layer, we hope to get a chronological picture of the evolving climate and history of water on the surface of Mars," Dr. Grotzinger said.

The nuclear-powered rover is equipped with a suite of instruments supplied by a variety of countries. Some of the equipment will be used to help scientists zero in on the most promising rock samples for detailed analysis.

For instance, the Canadian-built Alpha Particle X-ray Spectrometer (APXS), located on the end of the rover's robotic arm can fire alpha particles (a type of high-energy helium nuclei) and X-rays at a rock to determine its chemical elements. The composition of rocks provides clues to what the environment was like when they formed.

If APXS makes an interesting discovery, mission-control scientists at NASA's Jet Propulsion Laboratory in Pasadena, Calif., can order the robotic arm to drill into the rock and deposit the sample inside the rover's belly for an assessment by other instruments.

Earlier rovers have also been equipped with APXS units. But the APXS on Curiosity is "better, faster and more precise," said Ralf Gellert, an assistant professor at the University of Guelph and the scientist overseeing Canada's part in the U.S.-led Mars mission.

Dr. Gellert used to work at the Max Planck Institute for Chemistry in Germany, where the APXS units for previous Mars rovers were designed and tested.

Dr. Gellert, however, was forced to find a new academic base in 2005 when the German institute decided to close its cosmic chemistry division. And that's when Iain Campbell, a University of Guelph professor, pulled a few strings to bring Dr. Gellert to Canada.

Dr. Campbell is a leading expert on the interpretation of APXS data and had worked closely with the Max Planck team on previous Mars missions.

He helped Dr. Gellert secure a post at Guelph. At the same time, the two scientists approached the Canadian Space Agency to finance the development of a new and improved APXS system.

The CSA agreed to cover the $10-million cost of the project. MacDonald, Dettwiler and Associates – the same company that built the iconic Canadarm for the U.S. space shuttle – won the contract to fabricate the hardware.

"In my view, the University of Guelph is very fortunate to be part of such an important project with a potentially big public profile," Dr. Campbell said.

Although Guelph is playing a central role, it's not the only Canadian university with a part in the mission. Scientists at the University of New Brunswick, University of Western Ontario, Brock University and other Canadian institutions will be among the international team that's interpreting the data and charting the path for Curiosity on Mars. 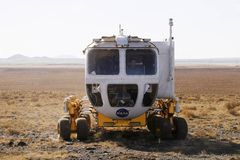 Canada space program to develop robotic rovers
September 22, 2010
Follow us on Twitter @globetechnology Opens in a new window
Report an error Editorial code of conduct
Due to technical reasons, we have temporarily removed commenting from our articles. We hope to have this fixed soon. Thank you for your patience. If you are looking to give feedback on our new site, please send it along to feedback@globeandmail.com. If you want to write a letter to the editor, please forward to letters@globeandmail.com.
Comments