On a moonless night on the banks of the Wolverine River, Lisa Buckley turns off the small flashlight she’s used to follow a trail through the dark woods. She makes a promise.

Then the paleontologist, who is part of a remarkable project that is giving British Columbia an increasingly important role in dinosaur research in Canada, lights a gas camping lantern, crouches on a shelf of black rock and begins sweeping away a thin layer of dirt with a whisk broom.

Ms. Buckley and her partner at the Peace Region Paleontology Research Centre (PRPRC) in Tumbler Ridge, Richard McCrea, have been racking up a surprising number of finds, including bones, teeth, tracks and skin impressions that date back nearly 100 million years. 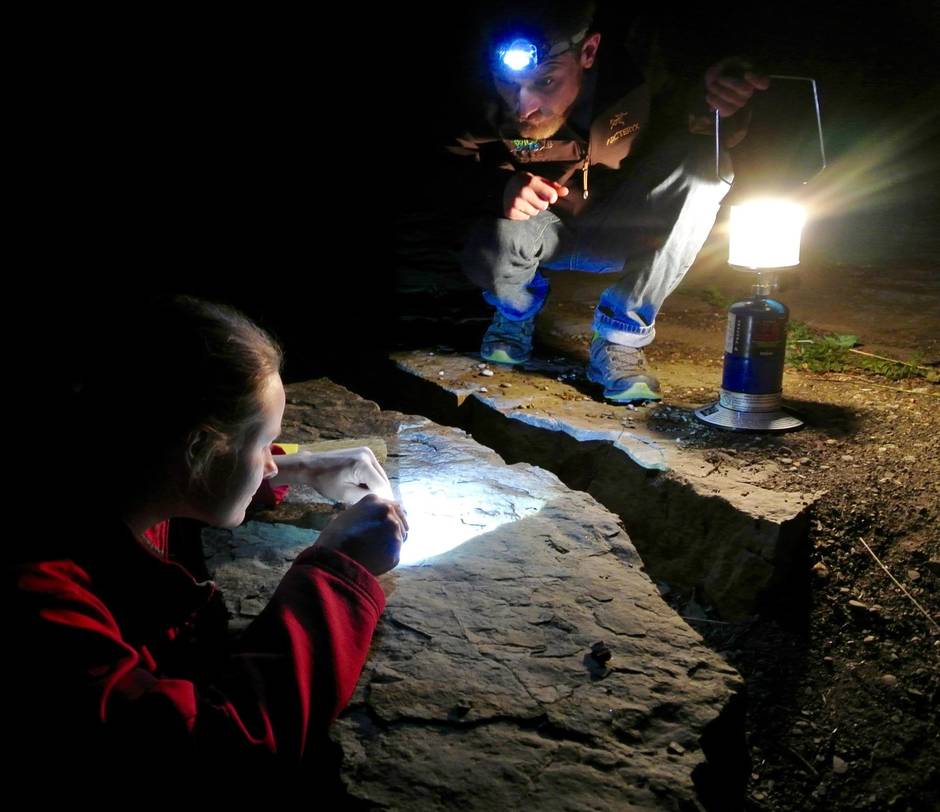 With the help of local amateurs, many of whom have taken workshops on how to spot dinosaur tracks, the PRPRC, which was founded in 2003, has amassed the first substantial collection of dinosaur skeletal material in the province. They have located nine of the world’s 14 known tyrannosaur tracks, found the first tyrannosaur “trackways” discovered to date, and created – in a small town 1,000 kilometres northeast of Vancouver – the province’s first dinosaur museum.

Located in a former French immersion elementary school that became vacant after a coal mine closed and the town’s population of about 5,000 was cut in half, the Tumbler Ridge Museum is a humble facility, with about 4,000 visitors a year and a single display room with five replica dinosaur skeletons. By comparison, Alberta’s Royal Tyrrell Museum has 400,000 visitors and 40 skeletons in nine galleries.

But Tumbler Ridge is fast becoming known as a dinosaur hot spot because of a steady stream of discoveries being confirmed by the researchers.

“Jurassic Park,” Ms. Buckley says, as she brushes debris off the rock shelf. “I remember seeing it when I was 13ish. When the original [movie] came out, it showed dinosaurs like they had never been depicted before – something that was living and breathing and looking at you.”

“Late Cretaceous footprints,” Ms. Buckley says, pointing to a stunning, three-toed dinosaur print that suddenly comes into focus. “They don’t show up well during the day, but at night, with a lantern on, the detail pops out.” 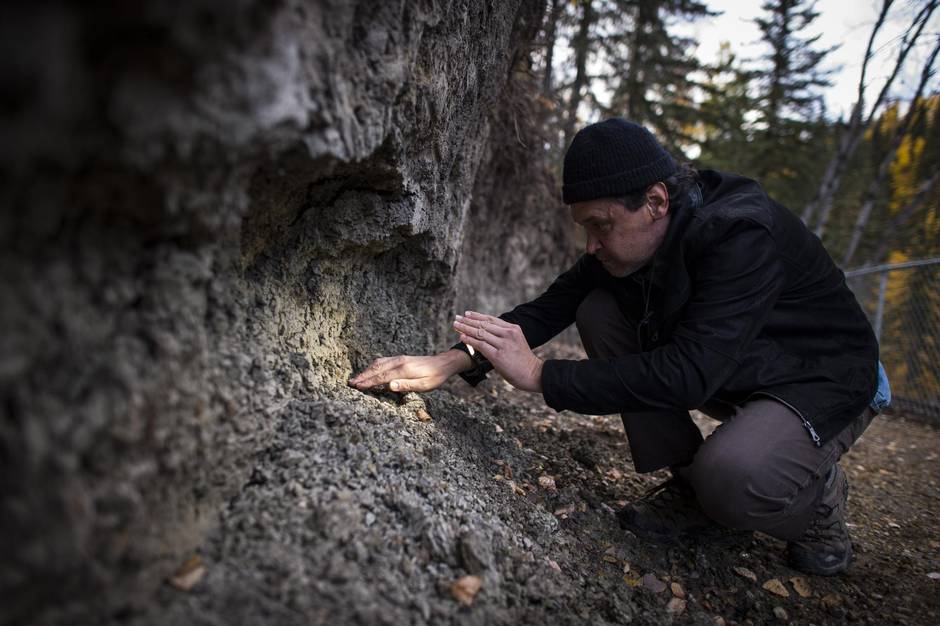 Matt Herne, curator and palaeontologist, studies amongst the bone beds close to the Philip J. Currie Dinosaur Museum on Sept. 25, 2015 in Wembley, Alta., a town of 1,383, a short drive from Grande Prairie. (John Lehmann/The Globe and Mail.)

During the summer months, the PRPRC offers night-time dinosaur hikes to rock shelves along the Wolverine River and other locations where tracks have been found in recent years. Some of the sites are known as dinosaur trackways because they contain a series of two or more consecutive prints from the same animal.

Ms. Buckley searches for a second print. “You kind of have to trace it backwards,” she says of the line of tracks. “Alright, here’s the next one, very faint … now we have a pace and know exactly how long the step is so the next should be back here. There it is!”

Her whisk broom flying, Ms. Buckley is tracking an ancient dinosaur that walked where she is kneeling 97 million years ago. She says the Tumbler Ridge region, which last year was designated a UNESCO Geopark in recognition of its special geological and archeological features, has been yielding finds at a remarkable rate.

Enthusiastic locals who go looking for dinosaur tracks with the obsession that some people go bird watching, and resource industry workers who call when dinosaur remains are unearthed by earth-moving machines, have kept the two paleontologists busy.

“We find either dinosaur tracks or bones every time we go out in the field,” she says.

Ms. Buckley says the region, which is now covered with thick forests on the eastern slope of the Rocky Mountains, was once a low-lying marshy area that was probably similar to the Mississippi Delta today.

Crossing the swampy landscape, dinosaurs often left their footprints in mud or soft sand, which became covered for millions of years until exposed through the up-thrust of mountains and the constant forces of erosion. She says a “dinosaur highway” runs across Alberta and extends deep into northeast B.C. 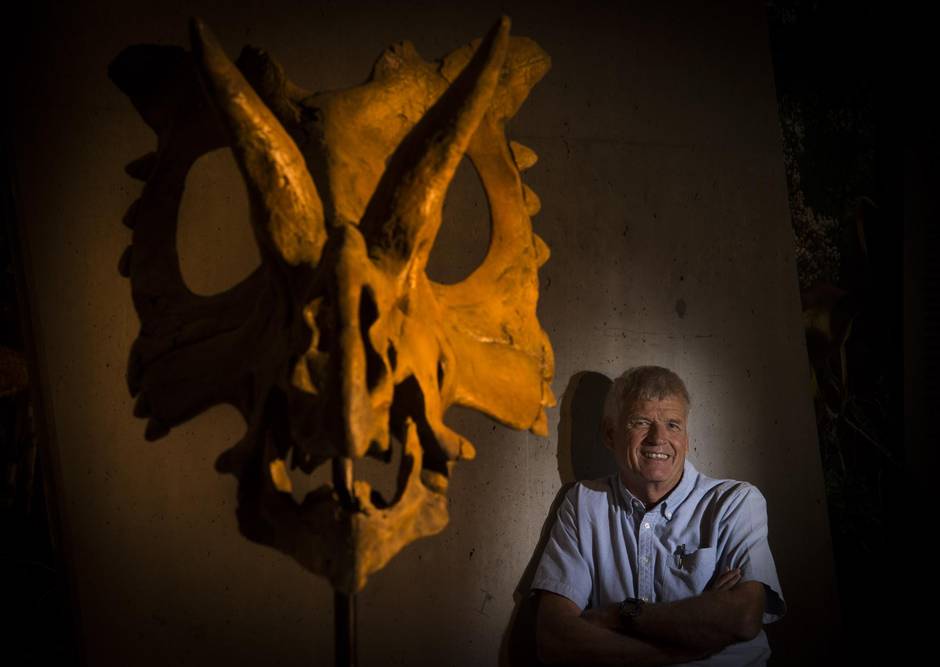 “Some sites in the [coal] mine are like cow paddocks. They have been trampled by dinosaurs,” Ms. Buckley says.

In a storage facility at the museum, Ms. Buckley shows off the rapidly growing collection. “This is where B.C.’s fossil heritage is archived.”

Many finds are left in the field because “we don’t have the staff, we don’t have the money, we don’t have the resources” to excavate and retrieve them. But much of what has been recovered is contained in rows of filing cabinets, where drawers slide open to reveal stunning treasures. Pieces that are too big to go in a drawer are set out on the floor or lean against walls. Everything is carefully labelled, detailing where, what, when and how each item was collected.

Among the several hundred items are parts of a skull from a duck-billed dinosaur; hip bones, thigh bones, teeth, claws from a variety of species; the shells of giant clams and tracks of everything from small birds to the giant Acrocanthosaurus, a meat eater similar in size to a T Rex.

Most of the finds are so old it is hard to believe they have survived. Ms. Buckley slides open one storage shelf and plucks out what looks like a giant wolf’s fang.

“It’s a 73-million-year-old tyrannosaur tooth,” she says. In another drawer, a Coelacanth tail, about 225 million years old.

Nearby is a cast of a series of tracks that makes even Ms. Buckley shake her head in wonder. “One of the jewels of our collection: This is the world’s first tyrannosaur trackway.”

The dinosaur tracks disappeared into a hillside that hasn’t been excavated yet. “It would take a lot of machinery to go into the hill,” Ms. Buckley says.

The PRPRC, which gets most its funding from local government and corporate donations, may not be able to afford that dig. But the dinosaur hunter can dream.

“It would really be great,” she says, “to find it dead in its tracks.”