Two years after becoming the first spacecraft to orbit a comet and dispatch a probe to its dusty surface, Europe's Rosetta spacecraft has ended its mission with a spectacular final plunge.

The spacecraft released an unprecedented series of snapshots during its descent to a mysteriously pitted region of Comet Churyumov-Gerasimenko as scientists and engineers looked on from the European Space Operations Centre in Darmstadt, Germany.

The end of the 12-year mission came at 7:20 a.m. Eastern Time as a display showing Rosetta's radio signal suddenly went flat. Flight operators displayed mixed emotions as the moment arrived, uttering spontaneous "awwws" mixed with applause. Soon the entire control room was on its feet as team members hugged and held back tears.

Related: Philae probe is first ever spacecraft from earth to land on a comet 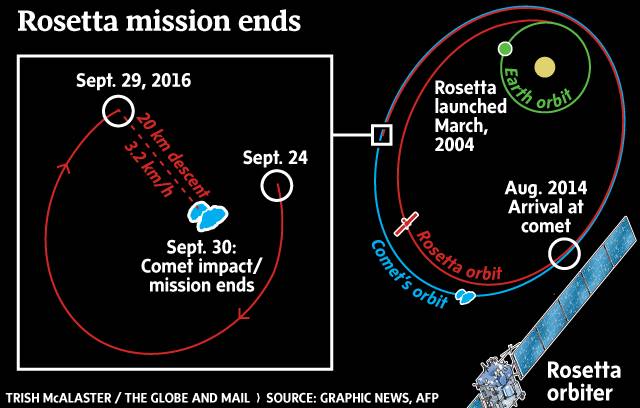 Explainer: The comet lander Philae: What you need to know

Rosetta's final image, transmitted just before it collided with the 4.3 kilometre-long comet, shows a slightly blurred view of a pockmarked terrain taken from just 20 metres away.

"Rosetta, you have done your job. That was space science at its best," mission manager Patrick Martin said.

Rosetta was launched in March, 2004, after years of planning and delays. It covered six billion kilometres in a long, looping path, including a close pass of Mars and three of Earth as it built up momentum for the final push to the comet, which it reached in August, 2014. It revealed that the comet is likely made of two separate bodies that came together at low velocity, to form one object with a distinctive rubber duck shape.

Three months later the mission captured world attention when the Philae lander detached from the main Rosetta spacecraft and dropped down to the comet's surface. The dramatic manoeuvre went awry when harpoons that were to have anchored the lander to the comet failed to fire. The probe skipped across the comet and finally came to rest wedged between a cliff and boulder. With its solar panels mostly in shadow, Philae's batteries were only able to last a couple of days as scientists scrambled to extract as much data as they could from the lander's instruments.

Meanwhile, Rosetta continued to provide increasingly dramatic views of the comet in a series of swooping orbits. Over the months, it gradually transformed and enhanced scientists' understanding of comets, which are composed of frozen gasses and particles that coalesced from the swirling cloud of debris that formed the solar system some 4.5 billion years ago. Rosetta tracked the comet as it drew near the sun and sampled the volatile gasses evaporating from its surface.

To date, some 672 scientific papers have been published based on Rosetta results, including detailed analysis of the organic molecules found on the comet,thought to be the raw materials needed for life to emerge on Earth.

"Rosetta has blown it all open," project scientist Matt Taylor said, speaking of the mission's impact on comet science.

Today's controlled descent was a calculated gamble by mission scientists to sacrifice their spacecraft while it is still functioning well and acquire a series of close-up views of the comet that would not be possible to obtain any other way. Since Rosetta was not designed to land or transmit from the comet's surface, its final impact effectively marked the end of its mission.

The carefully chosen target area for the descent was a region full of large pits, up to 100 metres wide. "Basically, these are like tunnels into the interior of the comet," said Art Chmielewski, of NASA's Jet Propulsion Laboratory, who was project manager for the U.S. portion of Rosetta. Because much of the comet is covered in dust, he said, the pits were seen as a rare opportunity to glimpse the structure of the comet's pristine interior.

During Rosetta's descent, scientists were on the lookout for rounded features dubbed "dinosaur eggs." Measuring only a few metres across, they are thought to represent the small building blocks that originally accumulated when the solar system was forming to make comets and feed the growth of the outer planets.

One of Rosetta's most important contributions has been to show that comets appear to have uniform but very low density interiors. "They're mostly empty space," Jessica Sunshine, a planetary scientist at the University of Maryland, said. "That's a huge insight into how these bodies formed in the first place."

She added that Rosetta sets the stage for a mission to bring samples from a comet back to Earth so that researchers can study the ancient material with all the tools available to science. Such a mission is one of the options the U.S. space agency is considering as it prepares to solicit scientists for mission proposals early next year.

Such a mission would likely be a decade or more away, but in the meantime NASA, together with Canada and other partners, is on the way to bring a sample back from an asteroid near Earth with the launch of the OSIRIS-REx mission earlier this month.

Canadians have some indirect involvements in Rosetta, including the Saskatchewan-based company that supplied the 35-metre-wide radio dishes that allowed the European Space Agency to pick up the distant signal from the comet probe.

"We built these ground stations for many missions," Denis Sirois, of SED Systems in Saskatoon, said. "But few have had the profile and have captured the imagination like Rosetta. It's been a privilege to claim that we had a small part in that."

Mr. Sirois added that Dr. Taylor is scheduled visit the company next week when he is at the University of Saskatchewan to give a public talk about results from the mission and ongoing efforts to analyze the trove of data Rosetta has produced.

"The spacecraft may end, but the science will continue," Dr. Taylor said.

An earlier version of this story stated that Rosetta's final image was taken from 51 metres away. The European Space Agency has since revised that figure.

Why this probe is scooping up pieces of this asteroid, and why Canada gets to keep some
September 7, 2016 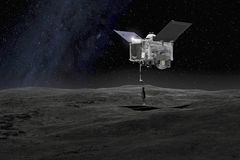 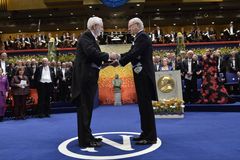