Sixteen years ago, molecular biologist John Roder received a diagnosis that changed the course not only of his life but of his career, bringing a new and personal urgency to his work in the lab.

He learned he had the genetic mutation that causes Huntington's disease, an inherited neurological disorder that usually strikes people in their 30s and 40s and causes personality changes, slurred speech, involuntary movements and, ultimately, full-blown dementia.

He was a world-renowned expert on the immune system and cancer, but he plunged into research on the brain and Huntington's. His father, who also had the disease, died at age 57 after more than a decade in a psychiatric hospital or long-term care home. Dr. Roder hoped to save himself from the same fate.

He and other researchers have made significant progress in understanding why the mutation wreaks such havoc in the brain, but there is still no cure for Huntington's, no drug to slow down its progression.

Yet he feels like a winner in his race against the illness. It is a victory because a 60-year-old with Huntington's is still able to run a lab at the Samuel Lunenfeld Research Institute at Mount Sinai Hospital in Toronto, where he investigates the genetics of a number of different brain diseases and holds a Canada Research Chair in learning and memory.

One of the cruel quirks of the disease is that offspring often show symptoms at an earlier age than their afflicted parent did. Dr. Roder's wife, Mary-Lou Roder, says she fully expected to have lost her brilliant, stubborn husband by now. Both are convinced that the intense mental effort his work requires has helped protect him from cognitive decline.

"It is part of my treatment," Dr. Roder says.

For years, he didn't reveal to his colleagues that the neurological changes they were studying were happening in his brain. He began to tell people eight years ago, and now has decided to go public with his story to raise awareness about Huntington's and reduce the stigma of a disease that affects 3,000 Canadians, with 18,000 more at risk of developing it.

His symptoms have worsened in the past five years. His speech is harder to understand and he has difficulty swallowing. His gait is unsteady and his arms and legs make frequent circular motions. He occasionally has outbursts of anger at the office, and he is on medication for depression. But his mind remains sharp and creative.

"The worst thing would be if other scientists discounted him as a scientist," says Joe Culotti, who studies the development of the nervous system and shares an office with Dr. Roder. "In the past five years he has done some of the best science he has ever done."

That includes work on a malfunctioning gene that may play a role in schizophrenia, a complex disorder his son, now almost 30, was diagnosed with as a teenager.

Dr. Roder's challenging job could be a factor in the slow progression of his disease, says Michael Hayden, one of the world's top Huntington's researchers. His daily workout at the gym may also be helping.

In some families, the pace of the disease slows down rather than speeds up as the mutation is passed from generation to generation, says Dr. Hayden, who works at the University of British Columbia.

Dr. Roder also has the benefit of a loving, supportive relationship with his wife, his high-school sweetheart. She helps him see the humour in some of the indignities he has endured as his condition has worsened. He likes to eat lunch outside on sunny days in the winter, but doesn't like to wear a coat. Twice, security guards have escorted him inside.

"I think they think he is homeless," Mrs. Roder says.

Dr. Roder says he kept his condition secret for so long because he wanted his work to be judged on its merit. "You want to accomplish whatever you can in life based on your abilities," he says.

Dr. Hayden, who collaborated with Dr. Roder for years, says many people with Huntington's fear being treated differently because of the disease. "John just wanted it to be one scientist to another," he says.

Dr. Roder has made an important contribution to unravelling the genetics of Huntington's, says Dr. Hayden, and clinical trials on potential treatments could start in three to five years.

Will a breakthrough come in time for Dr. Roder? He's not counting on it, but hasn't given up hope. He and his wife are happy their son is doing well and say it was a huge relief to learn their two children don't carry the mutation. Dr. Roder doesn't like to think about the future.

Michael Hayden has hope for a Huntington's cure
November 24, 2010 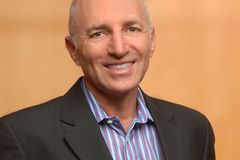 Huntington's findings called 'crucial step'
June 17, 2006
Follow Anne McIlroy on Twitter @AnneMcIlroy
Report an error Editorial code of conduct
Due to technical reasons, we have temporarily removed commenting from our articles. We hope to have this fixed soon. Thank you for your patience. If you are looking to give feedback on our new site, please send it along to feedback@globeandmail.com. If you want to write a letter to the editor, please forward to letters@globeandmail.com.
Comments