The Varroa mite is a crab-like parasite that is the scourge of North American honeybees, cutting their lifespans in half and quickly destroying entire colonies of the pollinators.

But scientists have found that honeybees adept at using their legs to swat the mites off and stay healthy have something in common – an active gene linked to grooming and repetitive motions.

The discovery raises the possibility that honeybees can be bred to resist the blood-sucking mites, which transmit viruses and are the biggest cause of declines in honeybee populations worldwide, said Ernesto Guzman, a University of Guelph professor who worked with researchers at Purdue University on the study, published in the journal Behavior Genetics.

Beekeepers currently use chemicals and other treatments to control the mites, but these promote resistance and can contaminate the bees' honey and wax. "We need to find other solutions to control the mite. One of them would be to breed bees that are resistant or at least tolerant of the mites," said Dr. Guzman, 58, who grew up on a cattle farm in southern Mexico and began keeping bees and selling honey as a teenager.

Dr. Guzman and his team put honeybees in a dish and placed a Varroa mite on their bodies. They gave each bee three minutes to remove the pest, which irritates the bee and can trigger scratching and shaking.

Only about 10 to 20 per cent of the bees were able to remove the mite. Additional research found these bees had a high expression of a gene known as neurexin, which is linked to repetitive motions in autism and other neurological disorders in humans.

A grooming bee is a healthy bee, Dr. Guzman said in an interview. "Some bees do it. Some bees don't do it. And those that do it might try to start to do it with one or two legs and then quit. Others performed intense vigorous movements, shaking of the abdomen and use three or more legs … until they finally achieve the objective."

The mite that is knocked off can land on another bee, or fall to the bottom of the hive and be unable to find a new host. In some cases, bees seize the mites with their mandibles and disable them, said Dr. Guzman, who runs the University of Guelph's honeybee research centre.

"The mite obviously causes an irritation on the bee. That's why she tries to remove the mite," he said.

Varroa infestation was the number two cause of honeybee deaths in the winter of 2016, behind poor health of the queens, the Canadian Association of Professional Apiculturists says. The group says the number of hives lost over the winter has been on the rise since 2006. In 2016, beekeepers lost 17 per cent of their hives – 121,000 colonies, the association says.

Honeybees and other pollinators essential for much of the food we eat face a list of threats that includes pesticides, climate change and loss of habitat. But globally, Varroa mites pose the biggest threat to honeybees, which are managed in hives and are essential to many large agricultural crops, said Dr. Guzman.

The reddish mites are about the size of a pinhead. They bite into soft spots on a bee's body and suck its blood, weakening the bee while transmitting deadly viruses. The mites crawl into the brood cells and lay eggs in the larvae and pupae of the worker bees, which form the vast majority of a hive's population. The parasites are attached to the bees when they emerge from the brood cells.

Jim Coneybeare, a third-generation beekeeper with 900 honeybee hives in the farmland west of Toronto's suburbs, said he first started coming across the parasites about 23 years ago.

He uses a handful of different miticides to keep their numbers down and keep the bees productive, rotating the chemicals to ensure the pests don't become resistant. "You notice the effects if you don't treat," Mr. Coneybeare said. "Varroa can be a problem for honeybees. We do our best to be vigilant."

Like any livestock farmer, Mr. Coneybeare is attuned to the importance of genetics in determining the aggressiveness, production and winter hardiness of his colonies. He said he'd welcome any advances that make the bees better able to withstand and fight off the parasites.

"We're always looking at genetics," he said. "If we can breed into them something that's resistant to Varroa, definitely."

Scientists believe Asian colonies of honeybees have faced Varroa mites for perhaps thousands of years, and have developed a natural resistance to them. The mites jumped to Western honeybees in the 1950s, and have been a problem in Canada since the late 1980s.

"It is new, in evolutionary terms," said Dr. Guzman.

The mites can drastically shorten the life of a worker bee, which are a colony's foragers but spend the first half of their lives inside the hive. A Varroa attack can kill a honeybee before it can fly in search of pollen and nectar, and the colony will weaken and die within two years unless the mites are brought under control, Dr. Guzman said. 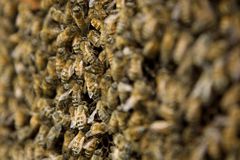