A groundbreaking effort against 'the big one'

Less than a minute before a major earthquake strikes British Columbia, the first signs of the impending disaster may be felt along a silty stretch of sea floor 100 kilometres off Vancouver Island.

It's there that the smooth ocean bottom suddenly climbs into a heaping ridge that looks remarkably like snow piled up in front of a plow.

This similarity is not coincidental. Driven by forces deep within the Earth, North America has been scraping its way across the Pacific for millions of years. But all along the 1,000-kilometre-long formation, known as the Cascadia subduction zone, the leading edge of the continent has been stuck for more than three centuries. And with stress building day by day, something, somewhere, is going to give.

What happens next will probably be the worst natural disaster in Canadian history. So notes a report from the C.D. Howe Institute to be released on Wednesday that takes a hard look at the impact of a catastrophic earthquake on Canada's insurance industry.

But even as the financial sector wakes up to the risk, scientists are already trying to harness technology to provide a crucial early-warning system that could help to mitigate the damage in British Columbia and in other seismically active parts of the country where the public remains unaware about what could happen.

Depending on exactly how it unfolds, an earthquake in the Cascadia subduction zone could register higher than 9 on the Richter scale, about as powerful as the Tohoku earthquake that devastated Japan in 2011. Nothing like it has occurred in British Columbia since Europeans first arrived, but traces of a massive quake that shook the entire region on Jan. 26, 1700, can still be found. (The exact date of that event is known because the tsunami it launched struck the Japanese coast several hours later.)

Today, the same event would deal a crippling blow to communities and infrastructure in one of Canada's most populous regions. Severe vibrations lasting several minutes could do irreparable damage to buildings and bridges. Anything resting on landfill or loose, saturated soil will be at risk of sinking or toppling when solid ground temporarily turns to Jell-O during the shaking – a process known as liquefaction. Landslides, ruptured pipelines and fires will add to the havoc. Then, about 20 minutes later, the tsunami generated by the crustal movement at the sea floor will begin to inundate the coast.

"The risk of large damaging earthquakes in B.C. cannot be understated," said Naomi Yamamoto, the province's Minister of State for Emergency Preparedness.

Earlier this year, the province committed $5-million to help Ocean Networks Canada, a national marine research initiative based at the University of Victoria, to install eight accelerometers – devices that can detect the initial trembling due to an earthquake – near the Cascadia subduction zone.

The first two were deployed during an expedition in June, with the help of a remotely operated deep-sea robot. After excavating the sea floor and carefully depositing the sensitive instruments, the robot packed them with glass beads that have the same density as sand, a strategy that helps to ensure that the accelerometers will move in sync with the surrounding sediment.

An accelerometer capable of detecting seismic vibrations is installed on the ocean bottom near the Cascadia subduction zone in June.

By the end of 2018, once all eight sensors in the ocean are in place together with many more on land, the system will be able to alert officials the moment a major earthquake begins offshore – potentially up to 90 seconds before the worst shaking reaches areas with the highest population density.

In that time, trains could be alerted to slow down, bridges and tunnels closed to traffic, gas lines shut off, elevators brought to the ground floor, computer systems powered down and surgeons signalled to stop delicate procedures.

"You would stop any kind of activity where there are people interacting with major infrastructure," said Kathryn Moran, president of Ocean Networks Canada.

Estimates suggest that an effective early warning could prevent 10 per cent to 50 per cent of deaths and damage caused by a powerful earthquake in the Cascadia subduction zone, said John Vidale, a geophysicist at the University of Washington and director of the U.S.-based Pacific Northwest Seismic Network.

"A large fraction of the losses come down to being in the wrong place at the wrong time," Dr. Vidale said.

The C.D. Howe Institute report offers a stark reminder that much remains to be done to ensure that the region is as braced as it can be for "the big one," an event with a magnitude of 8 or greater that has a one-in-three chance of occurring somewhere along the Cascadia subduction zone in the next 50 years.

What may come as a surprise to many is the report's assessment that on the eastern side of the country, particularly in the Ottawa-Montreal-Quebec City corridor, there is a comparable risk. In that region, the chance of a seriously damaging earthquake is only about 10 per cent in the next 50 years. But the abundance of older buildings and a general lack of public awareness about how seismically active the area is could potentially lead to a costly outcome.

A confounding factor in the East is that scientists have a much poorer understanding of why earthquakes happen where they do. Unlike the Cascadia subduction zone, the St. Lawrence is not an active plate boundary. Instead, it is thought that the underlying rocks in the area were weakened more than 500 million years ago during the opening of the Iapetus Ocean, a precursor to the Atlantic. The event created an ancient rift valley where the St. Lawrence flows today. Giant blocks of bedrock split and slumped as the ancient rift widened. The fault lines that were created then are still present, though well hidden below the surface. And they can be reactivated without warning by external forces pushing on North America from afar.

The most seismically active part of the St. Lawrence is in the Charlevoix region, possibly because of an asteroid impact there about 340 million years ago that left a 54-kilometre-wide crater and may have further weakened and complicated the local fault system. The crater connection is not proved, but there is no question that earthquakes are common there. A 6.2-magnitude tremor in 1925 destroyed many buildings in the area and caused damage in Quebec City, about 175 kilometres from the epicentre. In 1663, a far more severe quake that may have been as strong as 7.9 rocked the region and was felt as far away as Boston. Such an event would be disastrous it if were to happen today. 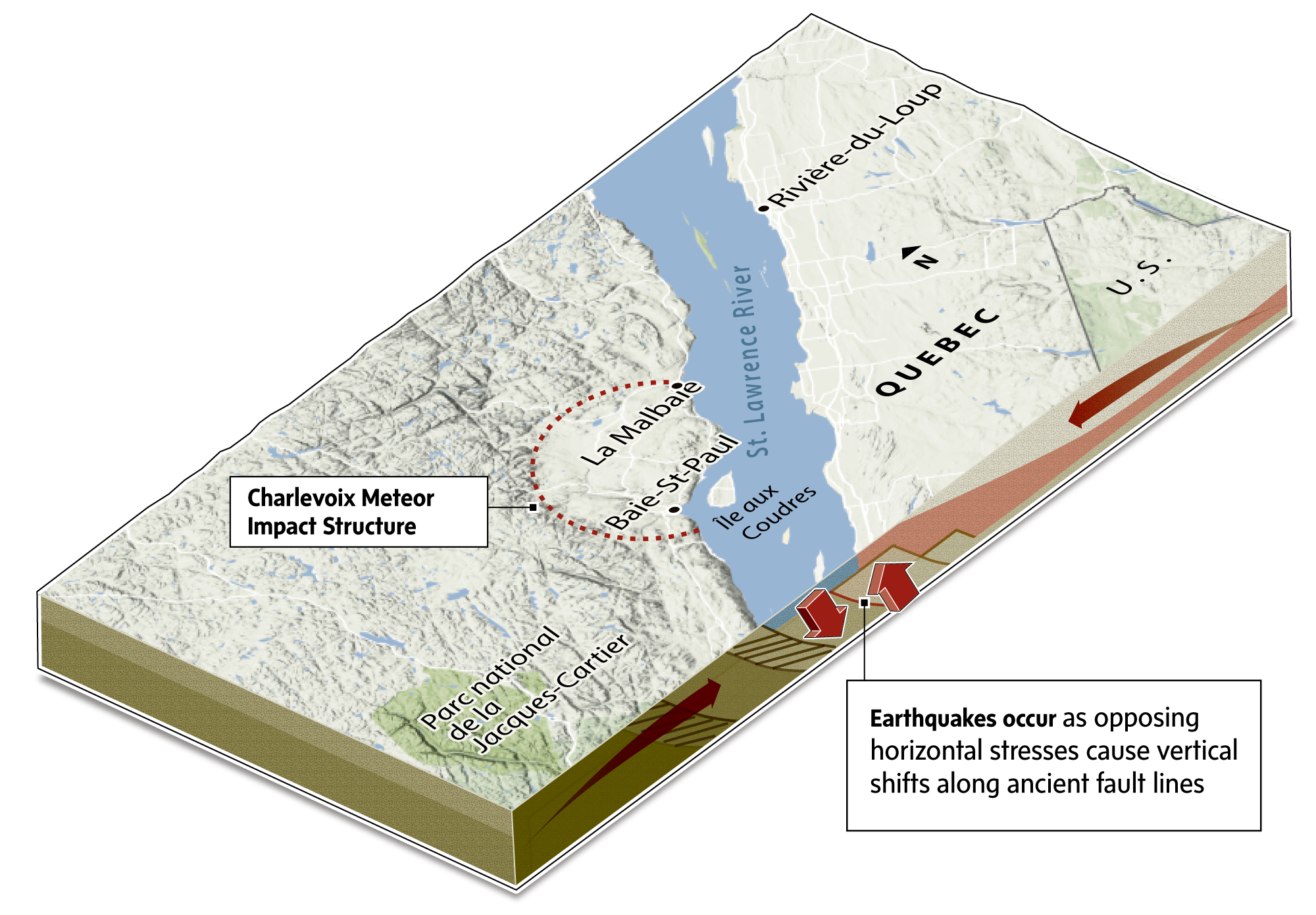 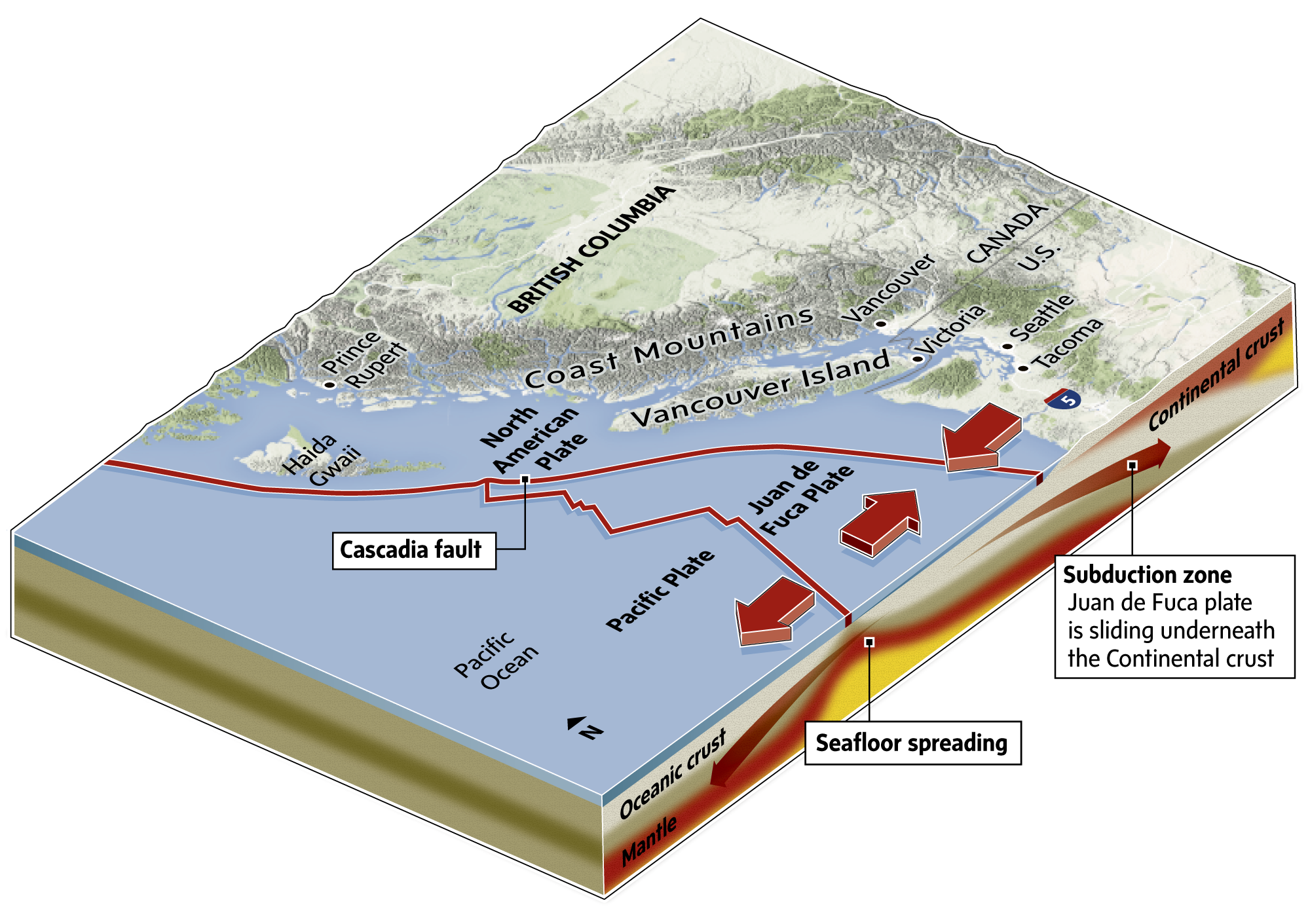 Farther upriver, Montreal is also in a seismic zone and the area around the city historically has had earthquakes "big enough to be concerned about," said Allison Bent, a research scientist with the Geological Survey of Canada, based in Ottawa.

But unlike the western situation, where the earthquake zone is some distance offshore, Dr. Bent notes that it is harder to engineer an early-warning system for a quake that could be centred right in the middle of a populated region.

Maurice Lamontagne, also a scientist with the survey, said that as the western system develops, the technology would eventually be adopted for the eastern region where it could still have a significant impact. In particular, a fully automated system that sent its warning directly to smartphone users across the entire region when an earthquake has just begun could make a big difference.

Yet, even as technological approaches to seismic risks improve, the magnitude of those risks will continue to grow because populations, property values and investments in the most vulnerable regions are all increasing, too.

But the key challenge to any mitigation strategy is education, Dr. Lamontagne said. He noted that in two telephone surveys conducted in Quebec in 2014 and 2015, most respondents were unaware of or played down the risk of a severe earthquake and only 15 per cent knew the appropriate actions to take.

He recounted that during a 5.2-magnitude earthquake that rattled Ottawa during a weekday morning in 2013, neither teachers nor students at his daughter's elementary school seemed to know how to respond. His daughter, then in Grade 2, dove under her desk as she had learned at home.

"She was the only one who knew what to do," Dr. Lamontagne said.

Here is The Globe's front page after the 1925 Charlevoix-Kamouraska earthquake. Click the bottom-left icon to open in new window.