Women who apply a virus-stifling vaginal gel in the hours before and after sexual intercourse can reduce their risk of contracting the HIV virus by almost 40 per cent, a much-anticipated study reveals.

The research, which will be presented Tuesday at the International AIDS Conference in Vienna, breathes new life into the idea that a cheap, effective "invisible condom" can be developed in the near future. Such a product is desperately required, particularly in parts of the world such as sub-Saharan Africa, where women have limited ability to refuse sex or force a partner to use a latex condom.

"We now have a product that potentially can alter the epidemic trends and save millions of lives," said Quarraisha Abdool Karim, associate director of the Centre for the AIDS Program of Research in South Africa (CAPRISA) in Durban.

She led the research team along with her husband, Salim Abdool Karim, a researcher at the University of KwaZulu-Natal in Durban.

While a 40-per-cent risk reduction might not seem like a lot, the potential impact is staggering given the enormity of the HIV-AIDS epidemic and the fact that it hits women disproportionately hard in large parts of the world.

An earlier mathematical-modelling study estimated that a microbicide that reduced the risk of infection by 40 per cent - and that was used by 30 per cent of women at risk in low-income countries - could avert as many as two million HIV infections a year and save $1-billion (U.S.) in health-care costs over a three-year period.

The idea of creating an "invisible condom" for women has been around for many years. but the theory has largely foundered in practice - until now. There have been 12 microbicide trials to date but the CAPRISA study is the first to show a significant reduction in HIV transmission. It is also the first to include an antiretroviral drug in the gel.

"The findings are encouraging and a true cause for optimism," said Zeda Rosenberg, CEO of the International Partnership for Microbicides. But she cautioned that the study was small and needs to be replicated on a larger scale. There is also some worrisome evidence that the gel may become less effective over time.

The research, which is also being published in the journal Science, involved 889 women between the ages of 18 and 40 who were sexually active and HIV-negative. Participants in the trial lived either in an urban setting, Durban, or a rural one, Pietermaritzburg.

Half of the women were given a gel that contained tenofovir, an antiretroviral drug, and the other half were given a placebo.

The participants were asked to use one dose of the gel in the 12-hour period before sex and a second dose as soon as possible after sex, but again within a 12-hour window. The gel is colourless and odourless, and is applied using a vaginal applicator that resembles a tampon applicator. The microbicide that was used in the research was cheap to produce. The gel itself cost only pennies and the most expensive component was the applicator, which cost about 32 cents.

All the women were also given counselling on safer sex, supplied with condoms and treated for sexually transmitted diseases.

During the 30-month study period, 38 women using the tenovir-containing gel contracted HIV, compared with 60 women who used the placebo gel.

That is a relative risk reduction of 39 per cent.

Put another way, for every 20 women who used the gel, one case of HIV-infection was averted.

Use of the tenovir-containing gel also reduced the risk of the women contracting genital herpes by 51 per cent. This is important, too, because women with herpes lesions are far more susceptible to contracting HIV.

Researchers found the gel had few side effects, aside from the occasional case of diarrhea. There was also no evidence of birth defects among babies born to women using the product.

Digging down in the data provided cause for both hope and concern, researchers said. For example, women who used the gel consistently and correctly saw their risk of contracting HIV reduced even further - 54 per cent.

At the same time, the numbers suggest that the product becomes less effective over time; infections were reduced by 50 per cent after one year and that slid to 39 per cent after 2.5 years. Researchers also found that a significant number of study participants - more than 40 per cent - used the gel less than half the time they had sex; more than one-third said they kept their use of the gel secret from their partner.

Nevertheless, the news was some of the most uplifting in the AIDS field in recent years.

"This is a historic day for HIV prevention research. The results are the first clinical evidence that a microbicide gel can help to prevent sexual transmission of HIV infection," said Mitchell Warren, executive director of the AIDS Vaccine Advocacy Coalition.

He cautioned, however, that it will take years to get the product to market because further testing is required and the process for regulatory approval is stringent.

A larger trial of the drug involving 5,000 participants is currently under way, but results are not expected before 2013.

Dr. Quarraisha Abdool Karim said that the developing a product that is effective is only one part of the challenge; a lot of work needs to be done to promote microbicides so that women will use them, and they need to be affordable, she said.

"It needs to be marketed and packaged," Dr. Karim told Reuters News Agency. "We had it in a boring white package. We need to make this a sexy gel." 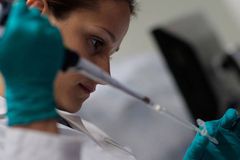 Human-rights abuses undermine fight against AIDS, world health body says
July 18, 2010
Follow André Picard on Twitter @picardonhealth
Report an error Editorial code of conduct
Due to technical reasons, we have temporarily removed commenting from our articles. We hope to have this fixed soon. Thank you for your patience. If you are looking to give feedback on our new site, please send it along to feedback@globeandmail.com. If you want to write a letter to the editor, please forward to letters@globeandmail.com.
Comments