Francesco Berna still remembers his first visit to Manot Cave, accidentally discovered in 2008 on a ridge in northern Israel. A narrow passage steeply descends into darkness. It then opens onto a 60-metre-long cavern with side chambers, all dramatically ornamented with stalactites and stalagmites."It's a spectacular cave," said Dr. Berna, a geoarcheologist at Simon Fraser University in Burnaby, B.C. "It's basically untouched."

Now Manot Cave has yielded a tantalizing sign of humanity's initial emergence out of Africa and a possible forerunner of the first modern humans in Europe, an international team of researchers that includes Dr. Berna said on Wednesday.

The find also establishes the Levant region (including Israel, Lebanon and part of Syria) as a plausible setting where our species interbred with its Neanderthal cousins.

The team's key piece of evidence is a partial human skull found during the initial reconnaissance of the cave.

Based on its features and dimensions, the skull is unquestionably that of an anatomically modern human, the first such find in the region. The individual would probably have looked like the first Homo sapiens that appeared in Africa about 200,000 years ago and been physically indistinguishable from humans today.

"He or she would look very modern. With a tie on, you would not be able to tell the difference," said Israel Hershkovitz, a biological anthropologist at Tel Aviv University and lead author of a paper published this week in the journal Nature that documents the Manot Cave find.

The age of the fossil is the crucial detail. The team's analysis shows it is about 55,000 years old. That is more recent than the fragmentary remains of some not-so-modern-looking humans that drifted into the region at an earlier stage. But it coincides exactly with a period when a wetter climate may have opened the door to the first modern human migration out of Africa.

Fossils of modern humans that are only slightly less old than the Manot Cave skull have been found in the Czech Republic and Romania, making the new find a potential forerunner of the first Europeans.

"It's in the right place at the right time," said Ian Tattersall, an emeritus curator at the American Museum of Natural History in New York, who was not involved in the find.

The timing also corresponds to the period when Neanderthals are known to have occupied the Levant based on fossils found at other sites. Paleogeneticists have previously determined that an interbreeding phase between modern humans and Neanderthals likely happened 47,000 to 60,000 years ago, to account for the Neanderthal genes still in the human genome today.

"The co-existence of these two populations in a confined geographic region at the same time promotes the notion that interbreeding may have occurred in the Levant," Dr. Hershkovitz said.

The migrations of modern humans – including their interactions with Neanderthals, whom they ultimately replaced – is a topic of high interest among anthropologists because it raises the curtain on the Upper Paleolithic, the formative period in prehistory that precedes the dawn of civilization about 10,000 years ago.

Exactly what triggered the migration is unknown, but many anthropologists posit that it corresponds to the emergence of a set of cognitive behaviours that may have included abstract reasoning and language.

"What we modern human beings seem pretty much uniquely able to do is disassemble the environment around us, everything we experience, into a vocabulary of mental symbols that we can recombine to make new statements about the world, not only as it is but as it might be," Dr. Tattersall said.

Archeologists are continuing to work in Manot Cave and more findings are expected. In addition to the skull fragment, stone tools, animal remains and charcoal from ancient cooking fires have been uncovered.

"Both wood and animals were brought into the cave by humans," Dr. Hershkovitz said.

He added that 50,000 years ago, the area would have looked like a wooded but open parkland, populated with creatures that could have served as food, such as mountain gazelle, hare and partridge.

The cave shows signs of human presence across a broad range of time until about 30,000 years ago, when it was cut off from the outside world by the collapse of its entrance.

Despite that change, Dr. Berna said, it is still possible to stand in the cave and imagine the kind of shelter it provided when it was more open to the environment, and where the likely locations of fire pits – a focus of his own research in the site – would have been.

"You make an educated guess and then you start excavating and find clear evidence of fire-making in the cave – it's very exciting," he said. 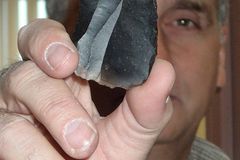 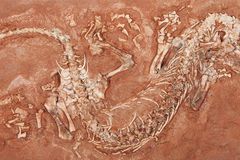