Days shy of her 77th birthday, Jane Goodall was slogging through another media tour: There were the eager handlers and gushing conservationists, ever curious about those chimps the soft-spoken woman with the trademark ponytail befriended in Tanzania nearly 51 years ago.

One day last week in Toronto started with an early-morning TV appearance, followed by an online chat Dr. Goodall was forced to dictate - her wrist is encased in a cast after a fall that also bruised her papery cheek. (This time, a hostile chimp was not to blame.) Yet more interviews, a youth event and an awards ceremony rounded out the 11-hour day. Told by a reporter to enjoy the rest of her whirlwind week in Canada, Dr. Goodall glared at her handler: "If I survive the rest of my time in Canada."

It's the fate of the conservation show pony: Dr. Goodall will do this 300 times a year, preaching a desperate if somewhat redundant message of habitat protection, youth engagement and general "peace and harmony" between man and Mother Nature.

Dr. Goodall's gruelling schedule is a measure of her success as the conservationist at least two generations have come to love. With the plush, banana-noshing monkey she carts everywhere (Mr. H), she is fuzzier than David Suzuki or Al Gore - and more quietly compelling.

With a conservation empire that now spans 120 countries through her Roots & Shoots youth program, Dr. Goodall has been a commanding chimp guardian since she retired as a primatologist and founded the Jane Goodall Institute in 1977.

Today, chimpanzees are an endangered species of about 350,000 scattered across 21 nations, living in small, unprotected forest patches surrounded by farmland and urban development. These isolated communities are especially susceptible to inbreeding and disease.

A Canadian arm of the Jane Goodall Institute was founded in 1994 and is partnering with the federal government to protect habitats in Uganda through sustainable agriculture projects and an innovative land-use plan that gets locals planting fast-growing trees in designated woodlots so that they don't cut into shrinking forest land.

Another threat is an increasingly commercial bush-meat trade, one that has left behind a sizable population of orphans that can't fend for themselves - chimps normally travel on their mothers until the age of 3.

"You get all these little infants who can't be sold for meat because there isn't meat on a baby chimp," says Dr. Goodall, a vegetarian who reportedly enjoys steamed greens.

Many of the infants end up at the Tchimpounga Chimpanzee Rehabilitation Centre, a 65-acre sanctuary run by the Congolese government and Jane Goodall Institute that is now home to about 145 orphans.

Dr. Goodall's first encounter with an infant chimp came early: her father gave her a plush version named Jubilee when she was one and a half. Raised in Bournemouth, England, the girl formed her animal fixation early on: A rabid fan of Dr. Doolittle, she'd later find Tarzan of the Apes in a second-hand bookshop. At 13, she caroled for rescued horses.

Dr. Goodall says her novelist mother "didn't encourage, particularly, but when she found I'd taken worms to bed at one and a half, she didn't throw them out. She just said they'd die without the earth and we took them back together."

At 23, Dr. Goodall travelled to Kenya, gaining the attention of anthropologist and paleontologist Louis Leakey, who hired her as his secretary. Dr. Leakey had been seeking a mind "uncluttered by academia" to spearhead a long-term study of the behaviour of wild chimpanzees. Even though Dr. Goodall, now 26, had no training or college education, Dr. Leaky controversially decided that she was the woman for the job.

"Everybody else laughed at my Africa dream, which wasn't, by the way, to be a scientist. It was to go to Africa and live with animals and write books about them," she says.

When Dr. Goodall arrived on the shores of Lake Tanganyika in Tanzania's Gombe Stream Chimp Reserve in 1960, her mother and an African cook in tow, her task seemed simple enough: "Try and find a chimp." It would take her more than two years to get up close, thanks to a system dubbed "the banana club" - routine feedings that helped her infiltrate the group.

It was one of several unconventional approaches, but none more contentious than her decision to name the chimps she encountered. "Why wouldn't I name them?" she asks, still indignant. "I didn't know anything about scientific method. All my animals had always had names, even my snails and spiders."

The findings she made there would radically change what researchers knew about chimps - the closest relatives of humans, with 98.7 per cent shared DNA.

Dr. Goodall discovered that, like humans, chimps have distinct personalities. (She would later learn that they have highly developed memories, remembering people for at least 11 years.) She also debunked the notion that they were strictly vegetarian, this after she witnessed them feasting on birds and colobus monkeys, and occasionally engaging in cannibalism.

The most crucial of Dr. Goodall's observations came in 1961, when she spotted a chimp she had named David Greybeard fishing termites from a nest with blades of grass. Her discovery that a species other than humans uses tools prompted Dr. Leakey to pronounce famously, "Now we must redefine tool, redefine man, or accept chimpanzees as humans."

In the end, Dr. Goodall outlived all of her Gombe chimps: none of the original group survived to the 50th anniversary of her first visit, although researchers now study the apes' children and grandchildren.

Dr. Goodall returns to Gombe twice a year to renew her energy for the "tough months on the road," an education campaign that also sees her blasting Westerners for their archaic attitude towards chimpanzees. Although their use in medical research has dwindled (it's too expensive), chimps are still routinely used in showbiz, the most recent being a CareerBuilder ad that ran during the Super Bowl this year. It featured baby chimps dressed in trench coats, carting briefcases and blocking a human "co-worker" in a parking lot.

"It's awful," Dr. Goodall says of a chimp's showbiz life. "Even if the training isn't cruel, which it often is, still you're left with a humanized chimpanzee who won't form part of a normal, zoo group. Zoos don't want them."

She says Western pop culture has long infantilized chimps, always favouring the babies: "People don't even think of the adult chimp. Some of the people who sell them in the U.S. (as pets) say this is 'the small kind.' Then you get something dreadful."

Which brings Dr. Goodall to Charla Nash, the Connecticut woman whose face and hands were torn off in 2009 by Travis, a friend's pet chimp. Travis - a gargantuan, 14-year-old former animal actor featured in spots for Old Navy and Coca-Cola - had been raised by Sandra Herold, who slept with him and gave him Xanax, a human anti-anxiety drug, the day he mauled Nash.

"I was asked about it all the time," Dr. Goodall says impatiently. "We've been saying for years chimpanzees aren't pets. As babies, they're cute and you can dress them up, but then by the time they get to 5 or 6, they're as strong as you are. They don't want to be a human child - they want to be a chimp."

Dr. Goodall herself had been "dragged and pummelled" by Frodo, an aggressive male that attacked cartoonist Gary Larson on his visit to Gombe and killed an infant girl brought into its territory by the niece of a researcher.

"If Frodo had really been out to hurt me, I wouldn't be here now. He was demonstrating his superiority. It was very unnecessary for him to do that because I know," she says matter-of-factly.

Although she chastises people such as Ms. Herold, Dr. Goodall misses being a pet owner herself - of dogs, that is. "I can't, can I? Three hundred days on the road?" she exclaims.

Dr. Goodall is wistful about the dogs her family kept in a childhood home she still shares with her sister, Judy, in Bournemouth. She points out that all the dogs bonded with her, even though she didn't court their attention the way she had the chimps'.

"My favourite animal is a dog. I love dogs, not chimps," she declares. "Chimps are so like us: Some are nice and some are horrid. I don't actually think of them as animals any more than I think of us as animals, although both of us are." 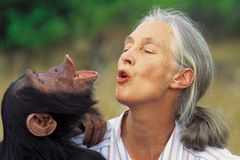 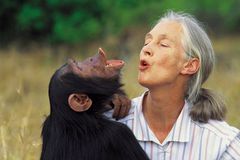