If there's anything that could boost Canada's global reputation in the world of research more than a Nobel Prize, it might be this: two Nobels back to back.

Last year, Art McDonald, who led an elaborate underground neutrino experiment near Sudbury, Ont., raised Canada's Nobel count when he was named a winner of the physics prize.

Since then, Governor-General David Johnston's initiative to ensure Canada's research institutions are nominating their most worthy scientists for the Nobels and other international awards has been gathering momentum.

This year's Nobel winners will be revealed in a series of announcements starting Oct. 3.

But based on a list of likely winners issued on Tuesday by the data and media company Thomson Reuters, Canadian nominees face an especially competitive field in 2016 that could shut them out of each of the Nobel's three science-related categories.

The annual list aims to identify researchers whose achievements and impact most closely match those of previous winners. Scientists who make the list are typically among the most highly cited by their peers and have often produced work that has far-reaching impact.

Often the work that the winners are recognized for by the Nobel committee involve advancements that are not well known or understood by the lay public.

This year is different and the Thomson Reuters list shows why. Projected winners of all three science prizes are associated with major breakthroughs that have been widely celebrated and featured in the media over the past three years.

For example, researchers who led the U.S. experiment that this year announced the first detection of gravitational waves, fulfilling a decades-long quest to prove Einstein's last great prediction, are strongly favoured to win the physics prize.

Among the likely recipients of the chemistry prize are key players behind the repurposing of a natural gene splicing system called CRISPR-Cas9 (pronounced "crisper-cass-nine") that originally evolved in bacteria to fight off viruses. Now it can be used for tailoring virtually any genome, including that of humans, with huge implications for health and other areas of life science.

Finally, many of those that appeared on the list for the Nobel prize in physiology or medicine helped to uncover a way that the body's immune system can be harnessed to fight cancer, a development that promises to transform treatment of many forms of the disease.

Such strong contenders could put a monkey wrench in Canada's plan to be more assertive about going after the Nobel prize. But Howard Alper, who chairs a canvassing committee that encourages Canadian nominations for international research prizes on behalf of the Governor-General's office, said he does not see it that way.

It's never certain whom the Nobels will favour from year to year, he noted, so Canadians who have made discoveries of Nobel Prize calibre should be nominated. He added that it could take another five to seven years of consistent effort before Canadians are winning Nobels at a rate that msight expected based on international comparisons.

He added that he is aware of at least four Canadian Nobel nominations this year.

In the meantime, Dr. Alper added, 2015 was a banner year for Canadian-based scholars, who took home 24 major international prizes, including Dr. McDonald's Nobel.

Even though no Canadians made the Thomson Reuters list this year, several were added in previous years, including Dr. McDonald. More recently, geneticist Steve Scherer at the Hospital for Sick Children in Toronto and laser physicist Paul Corkum, who is based at the University of Ottawa and the National Research Council, joined the list's Canadian contingent.

David Pendlebury, a citation analyst with Thomson Reuters who prepared this year's list, said the point of the exercise is only partly to try to predict if and when someone might win a Nobel.

"The other part is trying to recognize people who are the peers of Nobel Prize winners and who may or may not ever get a Nobel Prize," he said. "We want to highlight their work, too." 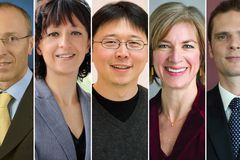 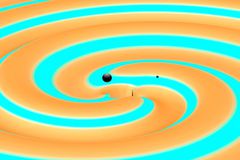 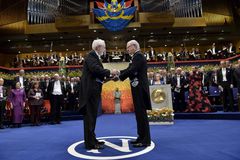