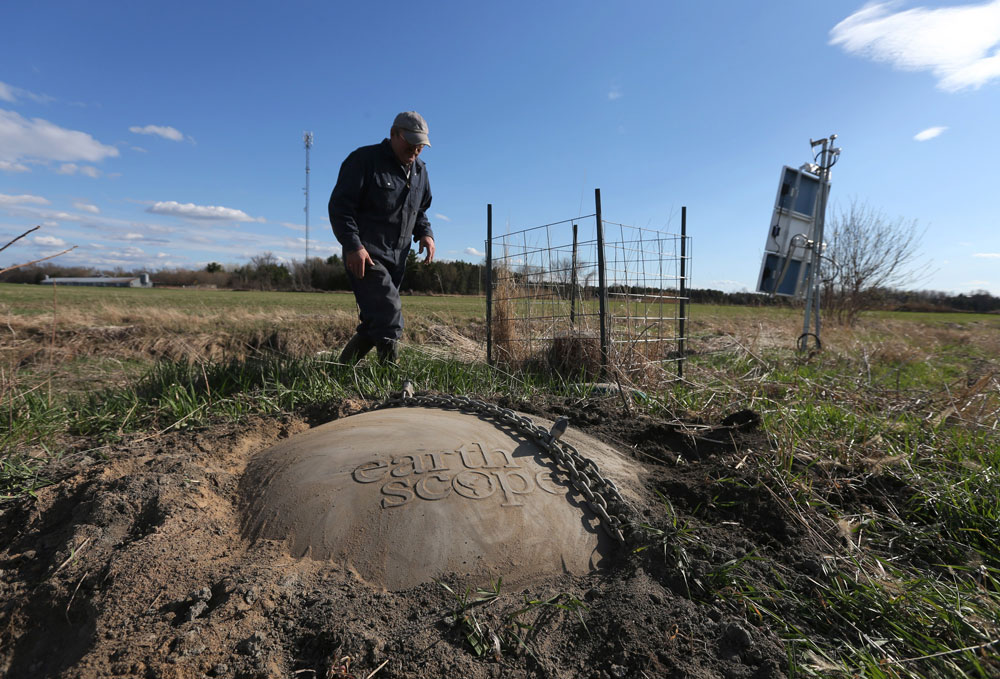 Aubrey MacDougall, who owns a farm in Ormstown, Que., agreed to have part of the USArray located on his land. (Christinne Muschi for The Globe and Mail)


Researchers have sunk hundreds of small seismic stations across the United States and Canada to explore the structure and evolution of the continent. As Ivan Semeniuk reports, the 12-year, $162-million array is sensitive enough to have detected the Nepal earthquake

Life comes with a soundtrack on Aubrey MacDougall’s and Laura Johnston’s dairy farm in Ormstown, Que.: There is the steady whir of the ventilation fans, the pulsing swoosh of the milkers and, of course, the occasional moo. But from one corner of the 93-acre property, scientists are remotely tuning in to the subtle rumblings of the planet beneath.

Since 2013, the farm has hosted a small seismic station designed to pick up minute vibrations from earthquakes taking place all around the globe. It is sensitive enough to have easily registered the 4.8 temblor that shook Michigan over the weekend as well as the devastating 7.8 Nepal earthquake of April 25 – an event half a world away.

The station is one of hundreds deployed in a giant array that currently stretches from the St. Lawrence Valley to Virginia. The array’s purpose is not simply to detect earthquakes but to use them to visualize what is happening below the surface. Since earthquake vibrations are affected by changes in the composition and density of the material they travel through, it’s possible to combine data from many stations to map the three-dimensional structure of solid rock.

A line of stations running up into the heart of the Canadian Shield is shedding light on how some of the oldest parts of North America originally came together. Data from a group of stations in Northwestern Ontario has been used to help map a hidden feature under Lake Superior known as the mid-continent rift. And a grid of stations was used to measure the electric properties of the continent under Alberta, yielding clues to the presence of minerals and fluids that can help illuminate the history of the continent’s western edge. 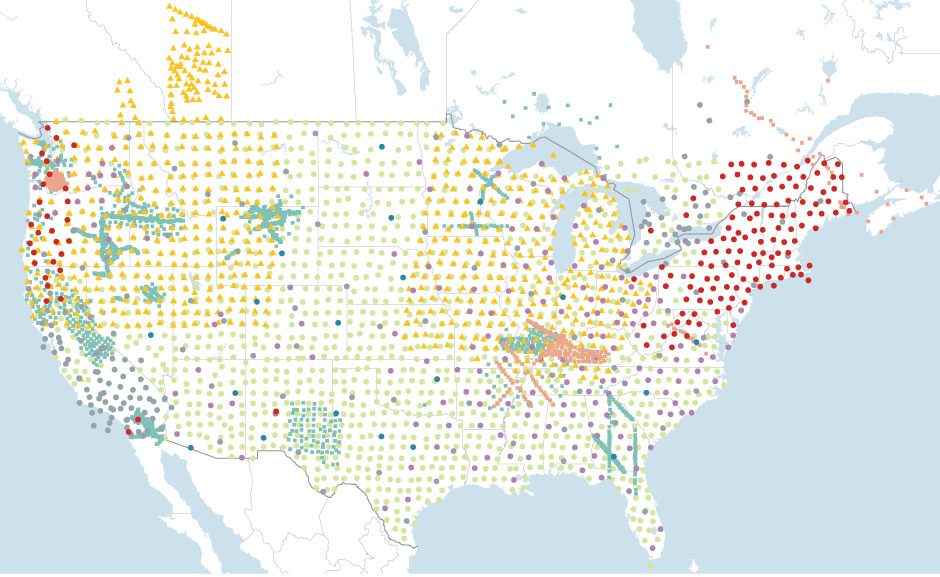 For more than a decade, scientists have deployed a band of seismic stations in a grid-like pattern to build up a three-dimensional image of the geologic features that underlie much of North America. The stations have been moved from west to east and are now deployed in the Northeastern states, Ontario and Quebec. (Murat Yukselir/The Globe and Mail) Source: Andy Frassetto/Incorporated Research Institutions for Seismology

“The end result is really a clear and uniform picture of what’s under the continent,” says Bob Woodward, who heads the Washington-based USArray as part of a broader effort known as EarthScope. Ultimately, scientists hope the picture will allow them to figure out how North America was assembled over the course of geologic time.

“We just thought it was really cool,” says Ms. Johnston, who adds that she and her husband were happy to have a seismic station placed on their land after other property owners in the area declined. “Why not participate if we could?”

The array is now in the final year of its coast-to-coast sweep through the lower 48 states. During that time, it has spilled into parts of Southern Ontario and Quebec by agreement with the Canadian government. As a byproduct, Canadian scientists have benefited from the ambitious project, which has cost the U.S. National Science Foundation $162-MILLION (U.S.) to date.

This week, at a joint meeting of American and Canadian geoscientists in Montreal, researchers on both sides of the border have been sharing their findings from the array and follow-up projects. Bit by bit, they are teasing out the geological structure of North America right down to its roots a few hundred kilometres below the surface.

“You can’t understand something until you see it,” says Andrew Frederiksen, a seismologist at the University of Manitoba who was involved in a follow-up experiment called SPREE (Superior Province Rifting EarthScope Experiment). It entailed placing additional seismic stations all around Lake Superior to better map a billion-year old feature known as the mid-continent rift, where the tectonic plate on which North America rests once started pulling itself apart but then stopped.

There are practical dimensions to probing these ancient and hidden structures. On one hand they can reveal places where mineral wealth from deep below Earth’s crust has been brought closer to the surface. On the other, they delineate the boundaries where separate pieces of the Earth’s crust were stitched together to make North America. Those boundaries help explain how and where earthquakes happen – particularly in the seismically quiet eastern part of the continent where earthquakes are rare and harder to understand. 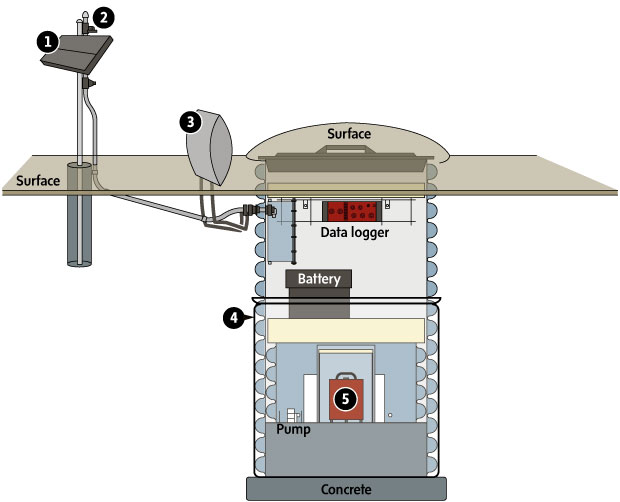 1. Solar panel: The power source is used to charge a battery so the station can run independent of the local electricity grid.
2. Antenna and GPS: The station uses a Global positioning system for accurate timing of its data, which it feeds via radio to a data-processing centre.
3. Atmospheric sensors: For measuring atmospheric conditions, which can influence seismic readings.
4. Vault: A plastic-walled cylinder rests on a concrete pad and houses the station’s delicate seismometer and electronics.
5. Seismometer: An extremely sensitive device that can pick up vibrations travelling through the planet for hundreds or thousands of kilometres.
(Trish McAlaster/The Globe and Mail)

The array was launched in 2004, when the first stations were installed in Southern California. Over the years it has rolled steadily eastward, adding new stations on the leading edge by transporting stations from the trailing side. In the past few years it has left behind the seismically active regions where tremors are common and the Rocky Mountains are still growing, to probe North America’s ancient foundations to the east. Scientists who specialize in the geological history of this region have been eagerly absorbing the data, much of which still has to be analyzed in detail.

“What we’re expecting is that our broad-brush view is going to be sharpened up and we’re going to see a lot of internal structure that we didn’t know about before,” says Fiona Darbyshire, a professor of geoscience at the University of Quebec at Montreal.

Dr. Darbyshire is leading an extension of the U.S.-centred array that consists of a line of seismic stations running northwest from Nova Scotia across the interior of Quebec toward James Bay. Over its 800 kilometres, the transect spans about three-quarters of the planet’s history.

At a Montreal workshop on Sunday, researchers presented early results from the project, including new details about a thickened piece of crust called the Grenville formation which runs parallel to the St. Lawrence River. It was once a mountain range that towered like the Himalayas. Other pieces of the formation can be found in Australia, South Africa and Siberia, but the Canadian section offers the best access to a poorly understood period of time, when Earth was in transition from a planet with a relatively hot and malleable crust to the one that is dominated by the continental land masses we know today.

This underscores the value of EarthScope and related projects, researchers say, because it finally offers enough of a window into the continent to connect surface geology with processes that are operating deep within Earth’s interior, often in ways that are useful for understanding other parts of the planet.

But despite such returns, there are no plans to extend a fully Canadian version of the array into the least understood part of the continent.

“That would be fantastic but it’s unlikely that we’ll ever see that level of resource available in the Earth-science community in Canada,” said David Eaton, a seismologist and professor at the University of Calgary.

It’s not just that Canada has more territory to cover with a much smaller science budget, he says, but that most of that territory is inaccessible by roads – the kind of ready access that made it possible to deploy EarthScope across the U.S. 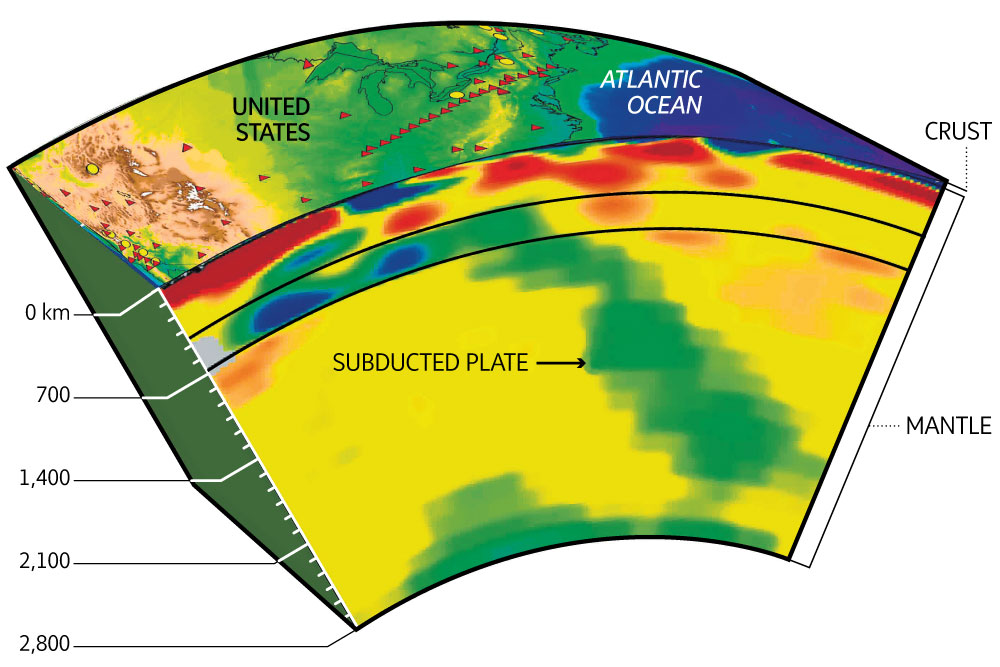 Data from the USArray is used to create three-dimensional images of the continent and the part of the Earth’s mantle that it rests on. Red and blue regions represent different sections of the crust that are warmer and cooler relative to each other. Source: Suzan van der Lee and Steve Grand/Incorporated Research Institutions for Seismology

In this country, researchers have just wrapped up a 14-year project called POLARIS. Supported by the Canada Foundation for Innovation, it mapped particular areas of interest on a regional scale. Some of its stations have been incorporated into the U.S. array. Likewise, another large array across southern Alberta is sharing data with the U.S. Looking to the future, Dr. Eaton says, the parts of the continent that scientists are most eager to explore with seismic mapping include offshore sections of continental crust, particularly in the high Arctic.

In the meantime, many of the stations that are currently in Quebec will soon be moving on to Alaska and the Yukon, where Canada will again benefit from the United States’s systematic survey of its share of the continent.

Ms. Johnston says she and her husband will be sorry to see “their” station go when it’s removed next month. They frequently went online to check the seismic data that was feeding into the array from their farm.

Even with the limitations on how much Canada can add to the emerging picture in the short term, researchers say the difference between what they know now compared to what they knew a decade ago about what lies beneath our feet is extraordinary.

“We’ve gone from having just one or two seismic stations in an area that provide a little bit of data to suddenly being extremely data-rich,” said Ian Bastow, a seismologist at Imperial College London.