Canada's influenza vaccination strategies are being thrown into question, with confusion growing among Canadians after a controversial study suggesting people are twice as likely to contract pandemic H1N1 if they have received a seasonal flu shot.

The unpublished study suggests that those under 50 years of age are at a higher risk of being infected with the swine flu virus after receiving the annual flu shot.

Details of the study, coupled with skepticism in some quarters about the new H1N1 vaccine, could place territorial and provincial inoculation programs in disarray with fewer people turning up for either shot.

Lead authors, Danuta Skowronski of the British Columbia Centre for Disease Control and Gaston De Serres of Laval University, have submitted their findings to an unnamed scientific journal and may not comment until it is published.

Their paper found that consistency across four epidemiologic studies and one animal experiment suggested "an association that cannot be dismissed on the basis of chance and is unlikely to be explained entirely by bias."

"If this association is real, these studies together suggest that recipients of seasonal [influenza vaccine]were at moderate 1.5-2-fold increased risk of medically attended pH1N1 illness during the spring/summer 2009," the paper said.

The findings have yet to be published, but word of it has prompted provinces and territories to revamp their vaccination programs. Yesterday, British Columbia and Prince Edward Island joined Quebec, Saskatchewan, Ontario and Nova Scotia in suspending seasonal flu shots for anyone under 65. New Brunswick is the only province so far to say it will continue with seasonal flu shots for all residents in October, as originally planned. Other provinces have yet to announce their decisions.

Perry Kendall, B.C.'s chief medical officer of health, said he did not know if he agreed with the study's findings, but said they cannot be ignored.

"What we have are respected scientists who have been doing a lot of research in the field for many years in Ontario, British Columbia and Quebec, whose findings support an increased risk," Dr. Kendall said.

But the study's results, along with provinces abruptly changing their flu strategies, have some health experts questioning whether this year's vaccination campaigns will be effective.

"For those people still on the fence, this could very easily put them into the no-vaccine side of things," said Donald Low, chief microbiologist at Toronto's Mount Sinai Hospital.

Ethan Rubinstein, head of adult infectious diseases at the University of Manitoba, agreed that the study "complicates" the situation. "The only thing left to do is to explain to the public exactly what this study has shown and what the consequences are. This is their duty now, and then people can decide," he said.

H1N1 has shown to disproportionately affect younger people, unlike seasonal flu, which burdens the elderly. That's because the H1N1 virus resembles a strain of flu that circulated before 1957, to which older people have been exposed.

The Canadian study throws a new wrench into the situation for young people.

The authors studied data from about 1,500 Canadians in B.C., Alberta, Ontario and Quebec, after receiving word of a possible association between the seasonal flu vaccine and the risk of H1N1 in a northern B.C. community. In medicine, an association is a connection between two events; it does not mean there is necessarily a cause and effect.

The study included few people with chronic conditions, which ruled out a link that would show only those with underlying health conditions are susceptible.

The biological link between seasonal flu shots and H1N1 remains a mystery, but the authors suggested that repeated flu shots do not allow a person to muster a robust immune response when exposed to a new influenza virus.

While other countries, including the U.S. and Australia, have not reported the same phenomenon, the study stated that it could be a result of a well-established and ongoing monitoring system in Canada. With a report from Jane Armstrong in Vancouver 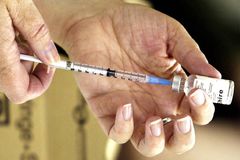 B.C. to delay seasonal flu shots
September 28, 2009
Follow Caroline Alphonso on Twitter @calphonso
Report an error Editorial code of conduct
Due to technical reasons, we have temporarily removed commenting from our articles. We hope to have this fixed soon. Thank you for your patience. If you are looking to give feedback on our new site, please send it along to feedback@globeandmail.com. If you want to write a letter to the editor, please forward to letters@globeandmail.com.
Comments