As NASA's New Horizons mission approaches a historic rendezvous with Pluto on July 14, the U.S. space agency has released its first colour image of the frozen world and its largest moon, Charon.

The image is little more than an orange-tinged splotch with a smaller and dimmer splotch beside it, yet it represents a watershed moment for the spacecraft. New Horizons has been en route to Pluto since January, 2006, and is now just three months away from its destination, which lies some 7.5 billion kilometres from Earth.

The colour image was taken on April 9, when New Horizons was 115 million kilometres from Pluto and Charon. Although short on detail, it reveals a marked difference in the quality of the reflected light coming from the two objects. This likely relates to differences in composition of the frozen materials that cover their respective surfaces.

"Pluto seems to be very bright. It seems to be redder," said James Green, director of NASA's Planetary Division at a news briefing Tuesday in Washington, D.C. "These are already tantalizing glimpses of this system."

At this stage, New Horizons is able to see Pluto at higher resolution than the Hubble Space Telescope, though its images will need significant processing and analysis to be more revealing.

When the spacecraft whizzes by Pluto in three months, it is expected that it will reveal the distant world's frozen surface in stunning detail.

Pluto may be small but for planetary scientist it's become something of a Mount Everest. It's the last unexplored planet (now called a dwarf planet) in the solar system whose existence was known before the invention of spaceflight. It is also the most distant, and therefore the "highest" pinnacle to explore in the sense that getting there means climbing up and out of the sun's gravity well.

"It's the farther shore of exploration ever reached by humankind," said Alan Stern, the mission's principal investigator.

But while the mission represents the end of what Dr. Green described as "the first stage" of the reconnaissance of the solar system, Pluto is also a gateway to a previously unexplored region beyond Neptune known as the Kuiper Belt.

"We are going to Pluto because it's the human race's first opportunity to explore an entirely new class of world," said William McKinnnon, a co-investigator with the mission.

First spotted by American astronomer Clyde Tombaugh in 1930, Pluto is just under 2,400 kilometres across and is thought to be composed of a mixture of rock and ice. It is large enough to have a modest nitrogen atmosphere which freezes and settles to its surface at times when it is more distant from the Sun.

Charon, which was discovered in 1978, is even more mysterious. Most planets have moons that are far smaller. but Charon is half the diameter of Pluto. That size ratio that makes it more like the Earth-moon system than any other planet-satellite combo in the solar system.

Charon may have formed out the debris from a massive collision between Pluto and another object – the same scenario that is thought to account for the formation of Earth's moon. Pluto also has four additional moons that are much smaller, though New Horizons may well find more.

The July flyby, perhaps the last time an entire world will be revealed in one fell swoop, harkens back to the Voyager missions of the 1970s, NASA's golden age of planetary exploration. 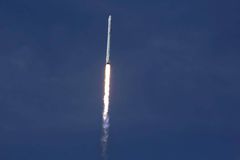 Astronauts about to blast off for a year away from Earth
March 27, 2015 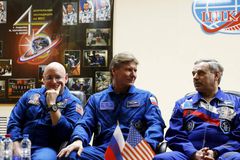