Astronomers have spotted a dwarf planet far beyond the orbit of Pluto, a rare find that marks the largest celestial object ever discovered by a Canadian-led team and one that could help to answer key questions about the origins and history of the outer solar system.

The frozen orb, designated 2015 RR245 until it gets an official name, is now located 65 times farther from the sun than Earth, or about twice Pluto's current distance, but in its elliptical orbit it ventures well beyond that. A mere dot as seen with telescopes, the object measures about 700 kilometres across – a bit smaller than Northwestern Ontario – based on its relative brightness and distance.

That estimate puts it among the 20 largest worlds that have so far turned up beyond the orbit of Neptune, the outermost of the solar system's giant planets, in a part of space known as the Kuiper Belt. The region is thought to be the repository of a vast population of icy objects, including Pluto, that are left over from the formation of the giant planets about 4.5 billion years ago.

The technical definition of a dwarf planet depends on various factors that remain a matter of debate among astronomers, but it includes any object that is massive enough to form itself into a sphere. Kuiper Belt objects are generally too distant to judge their shapes, so brightness is taken as a proxy for size.

Compared with most objects found orbiting the sun at such a great distance, RR245 "stands out like a searchlight," said Michele Bannister, a postdoctoral researcher at the University of Victoria and part of the discovery team.

After the object first turned up in survey images taken last fall by the Canada-France-Hawaii Telescope (CFHT), Dr. Bannister verified its motion and identity as a bright and therefore large member of the Kuiper Belt. Details of the find were then reported to the Minor Planet Center in Cambridge, Mass., which acts as the international clearing house for such discoveries.

While technical improvements have led to a wave of new discoveries in the Kuiper Belt in recent years, astronomers estimate only a few dozen will turn out to be as big or bigger than RR245.

"They are the lucky survivors of what were probably hundreds or potentially a couple of thousand of those [large bodies] that were originally formed," said Brett Gladman, an astronomer at the University of British Columbia and principal investigator of the Outer Solar System Origins Survey, the international project behind the find.

Initiated in 2013, the survey has already revealed 600 objects thanks to the CFHT's powerful camera, which can capture an area of sky roughly four times the size of the full moon in a single frame.

"They're using the telescope really well to try to find these types of objects," said Scott Sheppard, an astronomer with the Carnegie Institution for Science in Washington, who is not involved in the survey.

Dr. Sheppard is part of a team that in 2014 discovered a far more distant Kuiper Belt object whose orbit, along with those of a few others, may hint at the presence of an unseen planet that is more massive than Earth lurking at the remote edge of the solar system.

The controversial idea, which made headlines when it was publicized earlier this year, is neither supported nor refuted by the existence of RR245.

The reason is that RR245, which completes one orbit about every 730 years, probably comes close enough for Neptune to jiggle its trajectory from time to time. Such periodic kicks would erase the more subtle influences of the hypothesized but unproven "Planet 9."

JJ Kavelaars, an astronomer with the National Research Council, based in Victoria, and the team member who first saw RR245 show up in survey images, said some of the other objects uncovered by CFHT will probably have more to say about Planet 9.

"Our survey has large sky coverage and should provide an independent test," he said.

While adding a dwarf planet to the roster of those already known is a coup, Dr. Gladman said, the survey's main goal is to establish precise orbits for a much larger set of objects, most of them far smaller than RR245, in order to shed light on the solar system's chaotic beginnings.

Theorists suggest the largest objects in the Kuiper Belt, including RR245, originated closer to the sun and were later tossed into their far-flung orbits by the gravity of Uranus and Neptune as those planets migrated into their current orbital configuration.

In the coming months, Dr. Bannister said, she is hoping to track the dwarf planet to determine if it is locked into its present orbit through regular gravitational interactions with Neptune or whether it may eventually be pushed into a different orbit in the distant future. 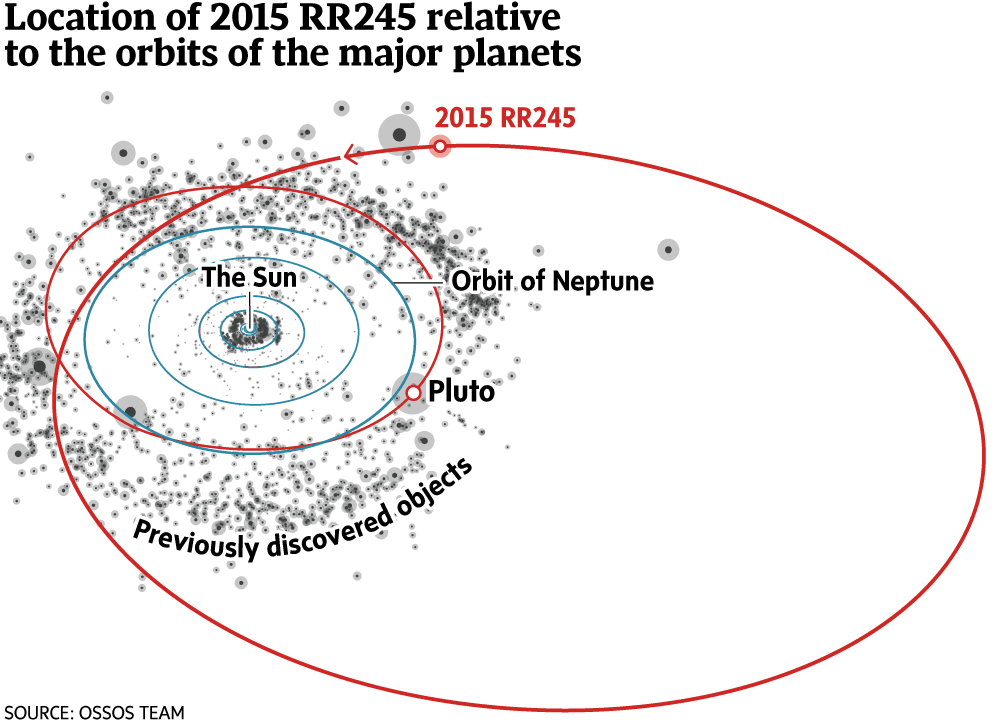 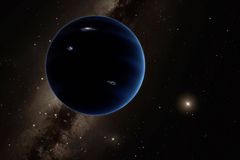