Breath has been described poetically as the bridge that unites your body to its thoughts. Breath can also provide a window to the body's health.

For at least as far back as the fifth century BC, when Hippocrates recognized the sweet, fruity odour signalling diabetes, the distinctive fishy reek of advanced liver disease and the urine-like smell associated with failing kidneys, physicians have used breath odour as a tool in diagnosing diseases.

In the early 1970s, Linus Pauling was able to demonstrate that exhaled breath contains more than 250 substances, including a multitude of volatile organic compounds. In the past decade or so, increased interest in these compounds as biomarkers of disease has spurred scientific interest in the early detection of disease, including cancer, through breath analysis.

Recent medical science has begun to regard cancer as fundamentally a metabolic disorder. Evidence points to impaired cellular energy metabolism being the defining characteristic of almost all cancers, regardless of whether they originate in tissue or cells, and researchers are looking to find the resulting biomarkers in breath samples.

They are searching in a variety of ways. Much of the work is being done using the traditional combination of gas chromatography and mass spectrometry, but a variety of novel technologies are being developed.

Hosam Haik, an Israeli chemical engineer, is working on a "nano-artificial nose" that uses gold nanoparticles to detect disease biomarkers. Research published in the British Journal of Cancer showed that it could detect cancer and even differentiate between the four most common forms — lung, bowel, breast and prostate cancers.

At the Clevelend Clinic in the U.S., a transplanted Canadian, Dr. Peter Mazzone, has demonstrated the ability to detect cancer based on the changing colours of an array of reactive chemical indicators embedded in a pigment matrix.

In Canada, Picomole Instruments Ltd. of Moncton, N.B., is developing breath analysis technology based on the original design of its founder, Dr. John Cormier. Late last month, Picomole and the Atlantic Cancer Research Institute announced that they would begin clinical trials involving 90 patients to test the ability of Picomole's breath analysis technology to identify lung cancer.

Dr. Cormier, whose background is in atmospheric physics, had his interest in breath analysis piqued a decade ago by a trade magazine article about detecting disease using breath testing. Why, he wondered then, couldn't he get a breath test at his doctor's office? "I dug a little deeper," he recalls, "and found that the existing technologies for breath analysis really weren't cutting it. While they were good enough, they didn't have what it took to be translated into clinical adoption."

While a graduate student at the University of Toronto, Dr. Cormier had invented an air sampling apparatus to monitor air pollution. He became convinced that it could serve as the basis for a breath analysis device compact and simple enough to be used in a doctor's office. In 2005, that conviction prompted him to leave his job at an oil-and-gas technology company in Edmonton to form Picomole, which relocated to Moncton in 2009.

The breath analysis technology developed by Dr. Cormier's team is based on infrared spectroscopy, an analytical technique that takes advantage of the fact that molecules absorb infrared light at specific wavelengths characteristic of their structure. "Ease of use doesn't get any better than with infrared, and the sensitivity and accuracy are second to none," says Dr. Cormier. "You can have a complete turnkey system."

Picomole's technology, called LISA (Laser Infrared Sample Analysis), is capable of providing an extremely comprehensive analysis of a breath sample – "an analysis that identifies not only the compounds that make up the sample but is fully quantitative," says Dr. Cormier.

At the Clevelend Clinic, the colour-changing sensors deployed by Dr. Mazzone aren't designed to provide the same sort of comprehensive analysis. They don't identify the substances present in a sample, they simply look for characteristic fingerprints of diseases. "The sensors themselves don't tell us exactly what chemicals are leading to the differences; they simply respond to the mixture of chemicals in the breath," says Dr. Mazzone.

Dr. Mazzone has worked at the Cleveland Clinic since his graduation from the University of Western Ontario medical school. A pulmonary specialist, he was intrigued by work colleagues were doing testing for distinctive substances in the breath of patients with asthma and began investigating the possibility that lung cancer and other diseases also left their signature in the breath.

His early work was done with a colour sensor originally used to detect spoilage in the food industry. "The sensor had coloured dots, originally they were coloured dyes, that were printed on an inert cartridge. Those dyes changed colour based on the chemicals they came into contact with," says Dr. Mazzone.

In two studies using the sensors, Dr. Mazzone has had success. "In our latest study we were able to show that the response could be about 80 to 85 per cent accurate in telling us whether the study subject had lung cancer or didn't," he says. He is now conducting a third study using a more advanced sensor that he hopes will improve the accuracy rates. The new sensor uses 130 coloured dots composed of pigments selected to respond to most of the substances expected to be found in exhaled breath.

Strong evidence exists of 30 or 40 major illnesses that can be detected by breath testing. Dr. Cormier says early intervention can significantly improve health-care outcomes. "There's a wealth of information that can inform decision making at an earlier stage of disease," he says. "When you intervene proactively at that stage, the outcomes are much, much better, and at much lower cost to the health-care system." 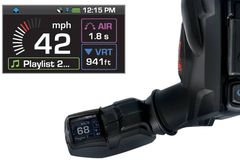 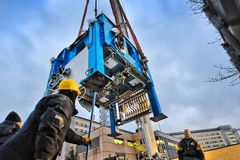 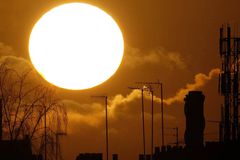 The future of cinema?
January 13, 2012
Follow us on Twitter @globetechnology Opens in a new window
Report an error Editorial code of conduct
Due to technical reasons, we have temporarily removed commenting from our articles. We hope to have this fixed soon. Thank you for your patience. If you are looking to give feedback on our new site, please send it along to feedback@globeandmail.com. If you want to write a letter to the editor, please forward to letters@globeandmail.com.
Comments