The U.S. takes its first step on Thursday in a long journey that will take human explorers to Mars with the test flight of the Orion spacecraft, successor to the Space Shuttle. While the first astronaut mission is years away, the launch represents a key milestone for a program born out of 2003's Columbia disaster.

It's a step forward – one that NASA has billed as "America's Next Giant Leap" – but it will inevitably evoke memories of the U.S. space agency's storied past.

For the first time since the Apollo moon landings, a spacecraft designed and built to carry human explorers is poised to venture beyond low-Earth orbit and push toward the boundaries of interplanetary space.

The launch –  which was delayed on Thursday morning due to wind gusts –  will be the crucial moment for Orion Multi-Purpose Crew Vehicle, a squat, cone-shaped capsule that, one way or another, will play a significant role in the next chapter of human spaceflight.

No people will fly on Orion this time. A first mission with astronauts on board is at least seven years away. But Orion's maiden voyage to space is widely seen as a pivotal milestone for a program that was born out the ashes of the 2003 Columbia space-shuttle disaster and has been struggling ever since through congressional budget battles and uncertainty over the ultimate direction of the U.S. space program.

If successful, Orion could push beyond all that. It is the vehicle that will restore NASA's ability to transport its own astronauts again, something it hasn't been able to do since the last space shuttle touched down in 2011. But while the shuttle was a bigger, more complex system, Orion opens the door to loftier goals, including taking human explorers beyond the moon, to the asteroids and on toward space flight's grandest prize.

"In the long term, we want to demonstrate that we are continuing on this 40-year journey to try to get humans to Mars," said Charles Bolden, the agency's administrator and a former astronaut.

In the short term, this flight is all about putting Orion through its paces in the kind of setting that simply can't be mimicked back on Earth. Once it's launched, mission controllers will be monitoring the capsule's guidance and navigation systems to make sure they operate as expected while the capsule swings around the planet a couple of times during its planned 4 1/2-hour sojourn. Another crucial hurdle will come when Orion plunges back down through the atmosphere at 32,000 kilometres per hour and will be relying solely on its heat shield to avoid burning up during the high-speed re-entry. As a final test, the capsule's parachutes will need to deploy at the right moment to bring it to a relatively gentle splash-down in the Pacific Ocean, about 1,000 kilometres off the coast of Baja California.

If all goes well, the next flight will see Orion venture around the far side of the moon some time around 2017-2018 – again uncrewed. That's still a long way from Mars, but reoccupying the lunar "proving ground" will be another essential milestone before NASA is ready to send astronauts to explore new territory among the asteroids and beyond.

It could also signal an important gateway for private space companies that want to get to the moon to do what NASA says it no longer should be doing on its own. Ongoing tests this week of a private lunar lander built by one such company, Moon Express, and the selection of two commercial companies, SpaceX and Boeing, to transport crew to the International Space Station speak to the larger transformation under way behind the Orion launch.

"I'm pretty excited by the activity at the Kennedy Space Center this week," said Moon Express president Bob Richards. "This is reminiscent of KSC as the capital of space that I knew as a little boy."

The Orion crew capsule looks a lot like the Apollo capsules that took astronauts to the moon and back, in part because its conical shape and shielded base are optimized for re-entry at much higher speeds than a space shuttle coming in from low-Earth orbit. But the new capsule, built by Lockheed Martin, has about 50 per cent more volume than Apollo capsules did and it is large enough to carry up to six astronauts.

On its maiden flight, Orion is expected to circle Earth twice and reach a maximum altitude of about 5,800 kilometres, more than 10 times the height at which the International Space Station orbits. Along the way, its on-board electronics will have to weather passage through two radiation belts where high-energy particles are trapped by Earth's magnetic field.

The rocket that will eventually take Orion to new destinations in the solar system has not yet been built. Its first flight will be atop a Delta IV Heavy, currently the world's most powerful available launcher. The payload includes not only the Orion crew capsule but all its supporting components, in particular the service module which propels the capsule and is jettisoned before its return to Earth.

After enduring temperatures in excess of 2,000 degrees as it tears through the atmosphere, the capsule will plummet toward its splash-down target in the Pacific. A series of parachutes will deploy to slow its descent. The capsule is expected to hit the water at about 20 kilometres per hour and will float until it is recovered by the USS Anchorage.

May 5, 1961 - Alan Shepard inaugurates U.S. human spaceflight with a suborbital flight in his Mercury capsule.

December 14, 1972 - Apollo 17 returns to Earth, bringing the U.S. lunar program to a close. For the next 42 years the focus of human spaceflight will shift to low Earth orbit.

January 28, 1986 - The space shuttle Challenger is destroyed during liftoff. All seven astronauts on board are killed and the shuttle fleet is grounded for two and a half years.

December 5, 1993 - Astronauts aboard the space shuttle Endeavour begin a series of complex repairs to restore the crippled Hubble Space Telescope.

November 20, 1998 - The launch of the Russian-built Zarya module marks the beginning of the construction of the International Space Station.

February 1, 2003 - The break-up of the space shuttle Columbia leads to an overhaul of the U.S. space program and the commissioning of a new crew vehicle along with new mission goals beyond low Earth orbit.

October 15, 2003 - China becomes the third nation to achieve human spaceflight when Yang Liwei is lofted into orbit aboard Shenzhou 5.

July 21, 2011 - The space shuttle Atlantis completes the last ever shuttle mission and the U.S. enters a period when it cannot launch its own astronauts.

In search of origins of Earth, Japan sends space explorer to blow crater in asteroid
December 3, 2014 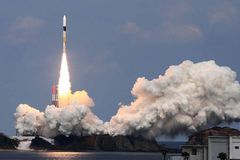