Scientists were expecting to be surprised when NASA's New Horizons probe barrelled past Pluto on July 14, but not this surprised.

While the results released so far have only skimmed the surface of what New Horizons has stored in its computer memory, the picture that's quickly emerging is of an active and evolving world rather than a frozen fossil.

"Pluto is dramatically more complicated than we might have anticipated," said Alan Stern, the mission's principal investigator. "I think that's going to be the case on multiple levels."

In addition to images that show what seem to be relatively recent geological formations on Pluto, there are other hints of a dynamic interior.

Like Earth, Pluto has a largely transparent atmosphere that consists predominantly of nitrogen gas. But with so little gravity, Pluto can't keep atmosphere from escaping into space.

Dr. Stern believes that the atmosphere must be replenished by an internal source that vents to the surface. That means internal heat, which could also explain the diversity of Pluto's landforms and its surprising lack of craters in the closest images seen so far.

"If there is a volatile layer underneath the surface and you have geological processes taking place, you can open up vents or chasms," through which plumes of gas might seep out, project scientist Hal Weaver said. "We haven't seen direct evidence of plumes yet, but I suspect that'll be coming."

Just as the best views of the surface features came as New Horizons was drawing close to Pluto's sunlit side, the best information about the atmosphere will come from the data that the spacecraft obtained while it was looking back toward the night side of the planet on the outbound leg of its encounter.

About one hour after closest approach, New Horizons passed through Pluto's shadow and watched as sunlight filtered through its tenuous atmosphere. Data gathered at that moment will reveal information about the atmosphere's composition and dynamics.

The first hints of what New Horizons learned from those observations could come as early as Friday, but it will be months before scientists have what they need to assemble a complete picture, since the probe's huge cache of data can only be streamed back to Earth so fast.

"This is a mission of delayed gratification," said Randy Gladstone, a co-investigator focusing on the atmospheric data. "We'll get the main part of our data back in September."

The limited pipeline for data means scientists have had to plan out which images they want to receive first. Those seen this week are all reconstructed from data files that were highly compressed to speed their transmission. Sharper, more detailed versions of these and other images will eventually arrive, stretched over a long period that will make it seem as though New Horizons is still at Pluto even though it's already millions of kilometres beyond it.

What has been received is percolating out to the broader planetary-science community as researchers puzzle over what Pluto and its moons have to say about the formation and history of the outer solar system.

Brett Gladman, an astronomer at the University of British Columbia who specializes in planet formation, said he was pleased to see so few craters on Pluto and its large moon, Charon, not just because it means they have been geologically active but because the craters that are there can be more easily counted to get an estimate of the number of objects of varying size adrift in the Kuiper Belt, a region beyond the orbit of Neptune.

"It is lovely that the largest world in the Kuiper Belt is going to allow us to indirectly peer down to the smallest sizes – that is, objects much smaller than we can detect from Earth or even the spacecraft itself," Dr. Gladman said.

Dr. Stern said he was gratified by the intense public interest in the mission, and its revelations about the most distant planetary body ever visited by a spacecraft.

"I think we gave people an opportunity to really get excited about exploration," he said. "It's rare in our time. It used to be routine and now it's very rare and precious." 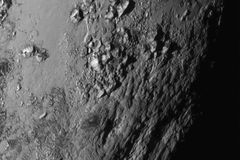 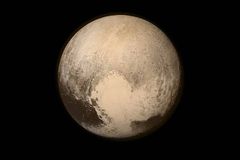 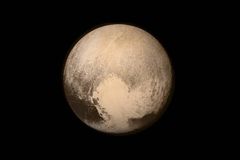