The first humanoid robot to visit space, Robonaut 2, will have several important jobs after it lands at the International Space Station in November: Do maintenance work, help astronauts and tweet.

"Hello world!" it tweeted - or, more accurately, its Johnson Space Center handlers in Houston typed. "My name is Robonaut 2 - R2 for short. Follow my adventures here as I prepare for space!"

As part of their mission to increase interest in space exploration, NASA engineers have created a Twitter account for Robonaut 2. The engineers will continue to send out 140-character messages when it lands at the space station.

"We want you to come along for the ride," Mr. Radford said.

The Twitter publicity gambit aside, Robonaut 2 has a serious purpose. Mr. Radford said the robot will be engaged in maintenance tasks - smaller jobs that help the human astronauts focus on more complex work.

"You can kind of think of Robonaut as helping as a nurse would to a doctor in an operating room," Mr. Radford said.

Station crew members as well as controllers on the ground will be able to control Robonaut 2's movements, but the robot is designed to be semi-autonomous. Once it's programmed with a task, Robonaut 2 can carry it out on its own with periodic status checks.

After engineers monitor how Robonaut 2 fares in zero gravity, the robot may graduate to more involved tasks. The hope, Mr. Radford says, is to design a version of the robot that can live outside the space station and perform emergency space walks. He says it takes an astronaut several hours to prepare for a space walk - a robot controlled by astronauts from inside the station would save valuable time in an emergency.

"Like the little Dutch boy, put his finger in the dam and plug the leak in the space station," Mr. Radford said.

He says the robot represents the beginning of a new generation of space exploration where humans and robots work together to explore the universe. And Robonaut 2 seems more than ready for his Nov. 1 space debut.

NASA and General Motors combined forces and funds in 2007 to create a prototype for Robonaut 2, and the final product, retrofitted for space travel, bears both GM and NASA logos on its torso. GM plans to incorporate the component technology from Robonaut 2 into its assembly line, but won't place the robot itself on the line with workers.

That privilege is reserved for space.

In order to make the robot space-ready, engineers put it through rigorous testing to ensure it wouldn't be damaged by radiation, electromagnetic interference or vibrations during the launch.

"I'm not nervous!" said one the robot's Wednesday tweets. "I have nerves of steel … er … aluminum."

From Sputnik to Mars rovers

Although Robonaut 2 will be the first humanoid robot in space, non-humanoid robots have been assisting with space exploration for years. Here are a few memorable space robots:

Sputnik 1, an artificial satellite, was also the very first space mission. The Soviet Union put it into orbit in October, 1957. A month later they launched Sputnik 2, the first to carry a living animal into space: Laika the dog.

Sputnik 1 helped identify the upper atmosphere's density. It communicated by emitting radio signals, which were monitored around the world.

It weighed 83 kilograms and was the size of a beach ball.

The iconic robotic arm has been used in space for almost 30 years, repairing satellites and helping to build the International Space Station. It first flew on the Space Shuttle Columbia in 1981, and since then a half-dozen more have been built.

The arm has a shoulder, an elbow and a wrist, each made of motor-driven gear-boxes that allow the Canadarm to bend and turn much like a human arm. In total, the robot weighs almost 454 kilograms and is 15 metres long.

The device is controlled from space by astronauts, via the general-purpose computer.

Spirit and its twin, Opportunity, landed on Mars in 2004. The six-wheeled robotic geologists have one major job: to look for clues about the planet's water history. The rovers take panoramic images of rocks and deposits of interest and, if the target is promising, they drive to the location and take measurements.

The rovers communicate constantly with controllers on earth as well as two spacecrafts: Mars Odyssey and Mars Global Surveyor. Navigators send commands to the vehicles through two omni-directional antennas.

The rovers are solar-powered, 1.5 metres tall and weigh 180 kilograms. 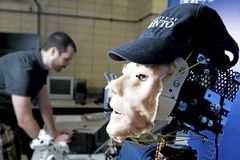