From the quirky to the profound, 2017 was full of discoveries, innovations and revelations across many fields of intellectual endeavour. Now it's time to look back on the year that was and put some reason in the season

1 Millions of Americans were thrilled by the spectacle of last summer’s total eclipse of the sun, which darkened skies along a narrow track from Oregon to South Carolina. When Canada experiences a similar event on April 8, 2024, in which Canadian location will the total portion of the eclipse last longest?
a. Fort Erie, Ont.
b. Sherbrooke, Que.
c. Miramichi, N.B.
d. Bonavista, Nfld.

Answer: a. All four locations will get a total eclipse, but Fort Erie will be in complete darkness the longest, at three minutes and 44 seconds.

2 In October, Canadian astronomer Robert Weryk, based at the University of Hawaii, made a historic celestial sighting. What was it?
a. a collision of two neutron stars
b. an asteroid that originated outside our solar system
c. the Canadarm on the International Space Station giving a high-five
d. the last glimpse of the Cassini probe before it disappeared into Saturn

Answer: b. The extrasolar visitor has been dubbed Oumuamua, which means “scout” in Hawaiian.

3 Which theory, published in 2017 by researchers at the University of Toronto, explains why seven very close-orbiting planets in a newly discovered solar system known as Trappist-1 haven’t crashed into one another?
a. the planets are forced apart by polarizing views about the Trump administration
b. the gravitational influence of a larger, unseen planet is keeping the other seven in line
c. the system is newly formed so there hasn’t been enough time for the planets to collide yet
d. the planets’ orbital periods are in resonance, like musical notes, so the system moves in harmony

Answer: d. The phenomenon is known as “gravitational resonance,” but it has never before been observed to govern so many bodies in a single system.

Answer: c. Ex-Alta 1 was successfully deployed from the space station using a spring-loaded device last May.

5 Which country experienced two of the five deadliest earthquakes in 2017?
a. China
b. Iran
c. Mexico
d. Syria

Answer: c. Mexico was hit by a magnitude 8.2 earthquake on Sept. 8, and a 7.1 just 11 days later. The second was more deadly because its epicentre was closer to urban areas.

6 Which country joined the Paris climate agreement in November, 2017, leaving the United States as the only hold-out nation?
a. China
b. Iran
c. Mexico
d. Syria

Answer: d. Syria announced it would join the agreement on Nov. 7.

7 A chunk of the Larsen C ice shelf was similar in size to which Canadian island when it broke free of Antarctica in July of this year?
a. The Island of Montreal
b. Manitoulin Island
c. Prince Edward Island
d. Vancouver Island

Answer: c. The iceberg was about 5,800 square kilometres in size when it broke away.

8 What is Crystal Serenity?
a. the largest cruise ship to journey through the Northwest Passage
b. an orbiting Chinese space lab that is expected to fall to Earth in 2018
c. the world’s biggest diamond, discovered this year in a South African mine
d. a glass sponge reef that Canada has named as a World Heritage Site candidate

Answer: a. The giant cruise ship made its second trip through the largely ice-free passage in September.

9 According to a World Wildlife Fund report issued in September, what percentage of monitored vertebrate species in Canada is experiencing population declines?
a. 10 per cent
b. 30 per cent
c. 50 per cent
d. 70 per cent

Answer: b. The falcon is an endangered-species success story. It has steadily recovered since the chemical pesticide DDT was banned in the 1970s.

11 What movie were paleontologists at the Royal Ontario Museum referencing this year when they named a new species of armoured dinosaur Zuul crurivastator?
a. Ghostbusters
b. Jumanji
c. Mary Poppins
d. Monsters Inc.

Answer: a. Zuul “the gatekeeper” was a horned beast that possessed Sigourney Weaver’s character in the 1984 comedy.

12 When a Canadian scientist suggested naming a newly recognized species of yellow-headed moth after U.S. President Donald Trump, what other distinguishing characteristic was mentioned in a scientific paper detailing the species Neopalpa donaldtrumpi?
a. is attracted to spotlights
b. makes a tweeting sound
c. builds a cocoon to “lock up” rivals
d. has comparatively smaller genitalia than a related species

Answer: d. No, we are not making this up. 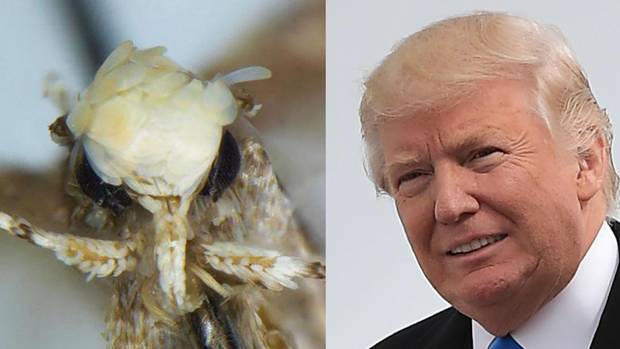 13 What biological process did this year’s winners of the Nobel Prize in physiology or medicine help to explain?
a. allergic response
b. circadian rhythm (the body’s internal clock)
c. the sensation of heat, cold and pain
d. sleep

Answer: c. However, the committee said research involving genetic changes that can be passed on to future generations should only be attempted for the treatment of severe disease or disability and under “stringent oversight.”

15 What disease captured the attention of global health officials when an outbreak of more than 2,000 cases flared up in Madagascar in the second half of 2017?
a. bird flu
b. Ebola
c. polio
d. plague

16 At what task did a computer algorithm developed at Stanford University outperform human medical experts in 2017?
a. achieving positive scores for sensitivity when interacting with patients online
b. arriving at a correct diagnosis based on X-rays
c. determining the most effective cancer treatment for the least cost
d. explaining the U.S. health-care system

Answer: b. The algorithm, which employed machine learning, bested radiologists when asked to identify cases of pneumonia from X-rays.

17 What new detail did scientists uncover about Egypt’s Great Pyramid in 2017?
a. the pyramid was built in two stages, centuries apart
b. the pyramid contains a previously undiscovered chamber
c. the pyramid is precisely aligned with the solar system Trappist-1
d. initially, people did not think the Great Pyramid was all that great

Answer: b. The chamber was detected by measuring differences in how cosmic rays are absorbed as they pass through the stone monument.

18 What did a genetic analysis of skeletal remains reveal this year about the Beothuk, the native people of Newfoundland who died out two centuries ago?
a. their diet improved after European colonists arrived in Newfoundland
b. they absorbed the DNA of Vikings into their population about 1,000 years ago
c. their internal body clocks ran half an hour ahead of those of people living on the mainland
d. they were not direct descendants of an earlier prehistoric people who lived in Newfoundland

Answer: d. And their diet also seemed to worsen as they lost access to marine resources once Europeans began settling the coast of Newfoundland.

19 What feat did a Chinese satellite accomplish for the first time this year?
a. transmission from orbit of a quantum-encoded signal
b. direct measurement of sea-level rise due to global warming
c. identification of an “enemy” spacecraft using artificial intelligence
d. shortening trip times for Beijing taxis by monitoring traffic flow from space

Answer: a. The breakthrough is regarded as a step toward unhackable long-distance communications.

20 What is the “electronic sackbut,” a musical innovation on display at the recently reopened Canada Science and Technology Museum in Ottawa?
a. Chris Hadfield’s guitar
b. a bagpipe-playing robot
c. the first automated foghorn
d. the first keyboard synthesizer

Answer: d. The device was built in the 1940s by National Research Council physicist and electronic-music pioneer Hugh Le Caine. The word “sackbut” is of French origin and originally described an early form of trombone.

How did you do?

Answer all of the questions to see your result
Great job! You sure know how to science.
Not bad. Want to try again?
Thanks for trying. Want to do it again?

QUIZ ME AGAIN! MORE FROM THE GLOBE AND MAIL