Scientists have discovered that many of the oldest and deepest rock formations on Earth are suffused with water that is rich in chemical energy and could house a vast underground habitat for microbes that dates back to life's first stirrings.

The find promises to open a new window on microbial evolution in the deep biosphere. It may also have significance for the exploration of Mars, where researchers speculate that an alien ecosystem may once have flourished far below the Red Planet's dry, frigid surface.

"This is not an isolated phenomenon. These old, salty waters are global," said Barbara Sherwood Lollar, a geochemist at the University of Toronto and lead author of a paper published this week in the journal Nature that documents the full extent of the hidden reservoir.

Working with data from more than 200 boreholes at 32 locations in North America, Africa and Asia, Dr. Sherwood Lollar and her colleagues found that water turned up virtually everywhere they looked in the ancient Precambrian formations that underlie most of Earth's continental land mass, including the Canadian Shield.

In earlier work, the team has reported the existence of pockets of ancient water sealed off from the surface that they had accessed at deep rock mines in Northern Ontario and South Africa. The new study suggests that the water is more widespread than researchers had previously recognized, and in some cases it has existed kilometres below the surface for millions or even billions of years.

The latest work shows that the water contains ample quantities of hydrogen gas derived from chemical reactions with minerals. This provides an energy source that can be exploited by bacteria and could sustain life without the need for sunlight or nutrients from the surface. Billions of years ago, it might have allowed deep-dwelling microbes to survive through times when meteorite bombardment or other environmental changes made the surface less hospitable.

An analysis of the hydrogen's abundance reveals what Dr. Sherwood Lollar calls "the energy budget for deep life" and finds that it is comparable to the amount available to microbes that live at deep-sea vents where hot magma from beneath Earth's crust is exposed to water at the seafloor.

"The exciting implication is that if there is so much more hydrogen coming out of deep rock than previously suspected, then there must be many more potentially life-sustaining pockets," said Doug Rumble, a researcher at the Carnegie Institution of Washington.

Dr. Rumble added that the study suggests that life may not be rare at great depths but that its extent remains poorly known, in part because when deep water is extracted for analysis it is difficult to avoid its contamination by bacteria that live closer to the surface.

Dr. Sherwood Lollar said she and her team members are continuing to collect samples of water at different sites around the globe to determine what kind of microbes are living there and what that may reveal about the broader story of life on Earth.

"We're trying to understand the biodiversity of the subsurface – how different is one place from another," she said.

The research may also have a bearing on the search for life on other world, particularly Mars, where the U.S. National Aeronautics and Space Administration's Curiosity rover has been searching for signs of past habitability.

On Tuesday, scientists reported the detection of trace amounts of methane wafting across the rover's landing site at Gale Crater – a surprise because the rover had previously not detected any methane at all. Methane is typically associated with biological activity on Earth. But on Mars, something more subtle may be going on.

"If you get water going down deep and the temperature gets high enough, it will react with rocks," said John Grotzinger, who heads the rover's science team.

Methane is one of the byproducts of such a geochemical process through a process called "serpentinization."

Dr. Grotzinger speculated that the methane could have been produced at a time when there was more water present on Mars and reacting with rocks at depth. As the planet dried out, the methane may have become locked underground, occasionally escaping in brief bursts.

If such a scenario proves correct, Mars may have once hosted its own zone of habitability deep below its surface, not unlike that uncovered by Dr. Sherwood Lollar and her co-authors.

"Mars is different from Earth, but it's similar enough that we can just scale things and imagine the same processes taking place," Dr. Grotzinger said.

Reservoir under Canadian Shield may be half as old as Earth itself
May 15, 2013 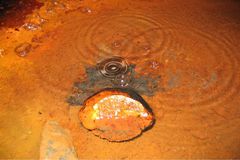 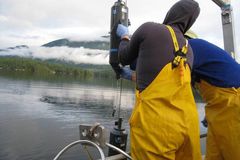 Jules Verne was right: Water hidden deep in the Earth, U of A study suggests
March 12, 2014 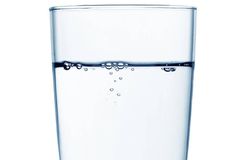