On one hand, it means Canadian jobs, high-tech innovation, an international partnership that includes India and China, among others, and a chance for Prime Minister Stephen Harper to come out looking like a friend to basic research.

On the other hand, $243.5-million is a lot of money to spend on one science project.

But whatever final calculations were made behind closed doors in the Prime Minister's Office, the outcome is a spectacular one for Canadian astronomers: Before a small gathering at a public observatory in Vancouver on Monday night, Mr. Harper officially committed Canada to membership in the Thirty Meter Telescope (TMT) project, a celestial colossus to be built in Mauna Kea, Hawaii, to probe the distant universe and search for signs that Earth is not the only planet in the universe capable of supporting life.

Because of its scale, the project will shape the professional landscape for astronomers in Canada for years to come. Even for the academic and industry coalition that has long lobbied for Canadian involvement, the extent of the federal support came as a welcome surprise.

"I'm more than over the moon – I'm over the galaxy," said Ray Carlberg, the project's Canadian director and a professor of astronomy at the University of Toronto.

The TMT is one of three such projects for which proponents are marshalling resources to take optical astronomy to the next level. The others include the 39-metre European Extremely Large Telescope and the 25.4-metre Giant Magellan Telescope, both of which are destined for mountaintops in Chile if they are built.

All are billion-dollar envelope-pushing feats of technology that require international coalitions to bring them to fruition. As the projects were beginning to take shape over the past decade, Canadian astronomers had a fairly stark choice – pick a partner or be shut out of the leading edge. After some vigorous debate, the community lined up behind TMT and began making its case to Ottawa in earnest a few years ago.

"We just didn't disappear," said Guy Nelson, CEO of Dynamic Structures Ltd. of Port Coquitlam, B.C., who was among those that met with federal officials to promote the project. Mr. Nelson's company created a novel design for the telescope's massive, 56-metre dome, and will build it as the largest part of Canada's contribution.

Yet there are also questions about how the financial and technical details will unfold. Canada had been expected to contribute about $300-million. The announced figure is less than that, which implies that a top-up may be needed down the road or that Canada's stake in the project may be a little less than what TMT advocates want it to be. One part of the equation that remains to be clarified is Canada's share of TMT's operating costs, which will kick in after the telescope sees "first light" (the astronomical equivalent of a test drive) in 2023.

Once the euphoria of this week's announcement dies down, astronomers behind the project will need to nail down the precise extent of Canada's commitment in hopes of avoiding shortfalls like those that afflicted Canada's contribution to the Gemini Observatory in the 1990s. Gemini consists of a pair of eight-metre telescopes that are the largest to which Canada has access. As TMT ramps up, the scientific community will also have to decide whether it will be necessary or advisable to ramp down Canada's role in Gemini and/or the Canada-France-Hawaii Telescope.

Meanwhile, 15 per cent to 20 per cent remains of the roughly $1.5-billion that the TMT partnership says it needs to build the telescopes. (The University of California and Caltech lead the project with a combined 25-per-cent share. In addition to Canada, which will have a share of 15 per cent to 20 per cent, other partners include Japan with 20 per cent and China and India with 10 per cent each.) One possibility is that the U.S. government could make a late entry to the project through the National Science Foundation, which has expressed support for TMT but which has no money to spare for it.

With $243-million contribution, Canada signs on to mega-telescope in search of first stars and other Earths
April 6, 2015 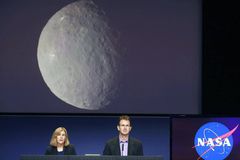