Researchers at the Princess Margaret Cancer Centre in Toronto have assembled the most convincing evidence yet that shows why a tenacious form of leukemia is prone to relapse and how the precise nature of the relapse can sometimes be predicted in advance.

The result sheds new light on the biology underlying acute myeloid leukemia (AML), a type of cancer that strikes roughly one in 10,000 Canadians and has a dismal long-term survival rate of only 10 per cent.

"It's amongst the most lethal of all cancers," said John Dick, a senior scientist with the University Health Network, who led the research. The results were published in Thursday's edition of the journal Nature.

Dr. Dick is known internationally for his work linking cancer with hematopoietic stem cells – cells that can generate all the other types of cells found in human blood. In 1994, he was the first to identify cancerous stem cells in leukemia and he has long championed the view that such cells act as the hidden seeds of the disease.

"A cell that survives treatment isn't enough for a cancer to come back. The cell has to have regenerative power," he said.

In the latest study, members of Dr. Dick's research team began with a genetic analysis of tissue samples from 11 patients who had been diagnosed with AML and successfully treated with chemotherapy, but whose cancer later returned.

In each case, the cancer cells that were found after relapse were shown to be genetically different than the majority of cancer cells found when the disease was first diagnosed. By carefully mapping the cells' genetic lineage, the team showed how the relapse could be traced to a minority of cancer cells that were already present at diagnosis. The team used genetically engineered mice developed by Dr. Dick to prove that these human cancer cells had stem-cell-like properties. That meant that after the bulk of the initial cancer was eliminated with chemotherapy, those stem-like cells became the source of the cancer relapse.

More surprisingly, the team found that relapse could be triggered by two different categories of cells, each harbouring its own unique set of cancer-causing mutations. Whichever was more abundant at diagnosis was also the one that caused the cancer to come back.

"We didn't expect to find that we'd be able to separate patients on the basis of the type of cell that causes relapse," said Amanda Mitchell, a member of the team and one of the lead authors on the study.

She added that the results open up the possibility of developing targeted treatments that are based on which cells are most likely to trigger relapse.

The catch is that finding those treatments will not be easy. One possible reason that the relapse-inducing cells are able to survive treatment is that they are good at being dormant, a property that stem cells share as a means of self-preservation. Dormant cells are unreachable by chemotherapy, which is designed to attack cells that are actively replicating.

The result underscores a growing recognition that cancer is more like a diverse and evolving ecosystem than a single disease, a characteristic that makes some forms of cancer especially difficult to eradicate.

"It's not a good news story in some ways," Dr. Dick said. "But we know our adversary now in much better detail than before and that is the first step in moving forward."

He added that the results also seem to rule out a less-favoured theory that relapse arises from mutations caused by the chemotherapy itself.

Mel Greaves, a senior researcher at the Institute of Cancer Research in London, who was not involved in the study, called the result an "elegant demonstration" of the role of cancer stem cells in relapse.

"It tells us we need to tackle the evolutionary diversity of cancer stem cells," Dr. Greaves said. "It comes down to looking for something that targets stem-cell properties or very clever combinations and scheduling of drugs that thwart their escape."

The Toronto study also highlights the rich interface of stem-cell science with cancer research, a historic strength for Canada that extends beyond leukemia. Last year, for example, researchers in Toronto and Calgary, with the support of Genome Canada and other funding sources, launched a $10.6-million effort to target cancer stem cells in glioblastoma, the most common form of brain cancer.

Nearly one in two Canadians expected to get cancer: report
June 20, 2017
Some cancer patients now have the option to stop treatment, but it's a risk
March 3, 2017 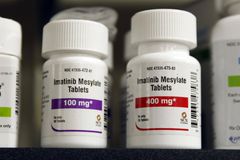 Fibre-optic device can detect stray cancer cells, improve tumour removal: study
June 28, 2017
Follow Ivan Semeniuk on Twitter @ivansemeniuk
Report an error Editorial code of conduct
Due to technical reasons, we have temporarily removed commenting from our articles. We hope to have this fixed soon. Thank you for your patience. If you are looking to give feedback on our new site, please send it along to feedback@globeandmail.com. If you want to write a letter to the editor, please forward to letters@globeandmail.com.
Comments