When Professor Keren Rice went North from Toronto in 1973, she entered "a completely different world" in order to study the Slavey language, which was then in danger of slowly dying out in the Mackenzie River Valley, where it had been spoken for thousands of years.

Her first home was in a tent on the river bank, next to an old log church in Fort Good Hope where the interior was painted in religious scenes vibrantly colored with native dyes mixed with fish oil.

Now, 38 years later, the professor in linguistics at the University of Toronto has been awarded a prestigious Killam Prize, which comes with a $100,000 award, for helping to maintain the language, in part through her definitive book, A Grammar of Slave, which is still in use two decades after it was first published.

The Killam Prizes, first awarded in 1981, recognize five of Canada's finest academics for their devoted work to scientific and scholastic research over their lifetime. They are handed out annually for research in health sciences, engineering, humanities, natural sciences and social sciences. The awards were created by Dorothy Johnston Killam in memory of her husband, Izaak Walton Killam, one of Canada's richest men, to "increase the scientific and scholastic attainments of Canadians."

In a interview Tuesday, Prof. Rice said she stumbled upon the language that became the focus of her professional life almost by accident.

She was a graduate student at the U of T when the wife of a faculty member reported a patient at the hospital where she worked had a visitor fluent in Slavey, which is spoken by the Dene in the Northwest Territories.

Prof. Rice jumped at the chance to speak with the visitor, and soon had launched a study of a language that was "obscure to us," though it was an ancient dialect spoken by several thousand people along the Mackenzie River.

Soon, she was on a flight North, on a field trip that would leave her so fascinated by the language and its people, that she would dedicate much of her professional life to its study.

"When I first went to Fort Good Hope … it was June so it was light 24 hours. We had an arrangement about the place to stay, but there was a meeting with the Indian Brotherhood then, so every spare place in town was taken," she said. "The point by the church was full of tents and we ended up staying in one of those tents and going to drum dances at the school and having dinner cooked outside. So it was really a kind of immersion into another way of living."

Prof. Rice said that over the years she has travelled with Dene families to fishing and hunting camps, studying and recording the nuances of a language that is so different that many of the sounds in it just don't exist in English.

"There are a lot of new sounds that you need to learn … and there are tones, like in Chinese, where your voice goes up or down … and then the words are really long, compared to English, with lots packed in to them," she said.

But Prof. Rice said it was the people as much as the language that she fell in love with.

"Language is one vehicle to all of that. It's the place, it's the people, it's learning about another way of living," she said of her linguistic fieldwork. "You learn so much about yourself and you hope you have a little bit to offer, because people have so much to offer to you."

One of the things she was offered, on a winter trip, was a freezing tent to sleep in.

"The weather was so cold I thought I wasn't going to wake up in the morning. But then you do," she said. "It must have been minus-30, in a tent. There was a stove in it but when the fire dies out it gets pretty cold. I don't think I had ever been so cold in my life."

Prof. Rice said the Anglican and Catholic missionaries were the first to begin writing the Slavey language, but in the 1980s, she played a formative role in standardizing the format.

Language committees were formed, made up mostly of Slavey speakers, with linguists as advisers, and slowly they settled differences over how a variety of sounds were written. That material formed the basis of a dictionary and all the school materials that have been developed since then.

Slavey is one of the official languages of the Northwest Territories, where it is incorporated into the school system. It is spoken by more than 3,500 people.

The University of Montreal professor - described as "one of Canada's science superstars" by British astronomer David Darling - stumbled into the world of quantum physics, as much as one can stumble into that world. He and Charles Bennett together invented the BB84 protocol, a practical application of quantum physics as a way to ensure no one can eavesdrop when qubits of data are being transferred. He also helped develop a method of teleportation for immeasurable data, like the angles at which a photon releases light. "The main motivation [of my work]is the beauty of it, really," he said. Prof. Brassard, who turned 56 Tuesday, is the first scientist of quantum information to win the Killam Prize.

Scientific philosopher C.P. Snow's 1959 lecture The Two Cultures spoke of a division between the arts and the sciences. That's not a problem University of British Columbia's Michael Hayden knows, and he sees his Killam Prize as proof. "Often we're at the edge of our fields, often to make the discoveries we do we have to be in disagreement with the status quo. And the result is borne of the … celebration of the creative spirit." That arts side may be what influences his compassionate approach to medicine - he earned the award for work in the genetic causes of Huntington's disease and ALS that started when a patient in a clinic in his native South Africa showed signs of Huntington's.

In some ways, the University of Manitoba's Lotfollah Shafai has a split personality. His early work is in space, in the first pico terminals on the Canadian satellite Hermes; his later work is in the oceans, electromagnetically mapping global warming's possible effect on Arctic ice. "When we do research, usually we are not certain we are doing the right thing. But when community and colleagues tell us what we have done is right, it gives us more energy and more drive to carry on. It gives me a reason to continue working on it."

The University of Waterloo's professor of psychology, Mark P. Zanna is passionate about his work. You can tell from the way he lists off in minute detail the social psychology analyses he's done in the field on how we evaluate the world. Among his work, he has developed a "thermometer" on the factors that produce sexism, studied the effectiveness of cigarette warning labels and delved into the nuances of identifying implicit racism. So it's easy to see why he's one of the world's most cited social psychologists. "[Winning the Killam Prize]is incredible. I didn't even know I was nominated. I see it as the capstone of my career, I'm so blown away." 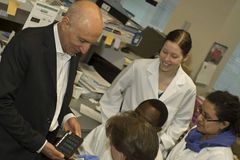