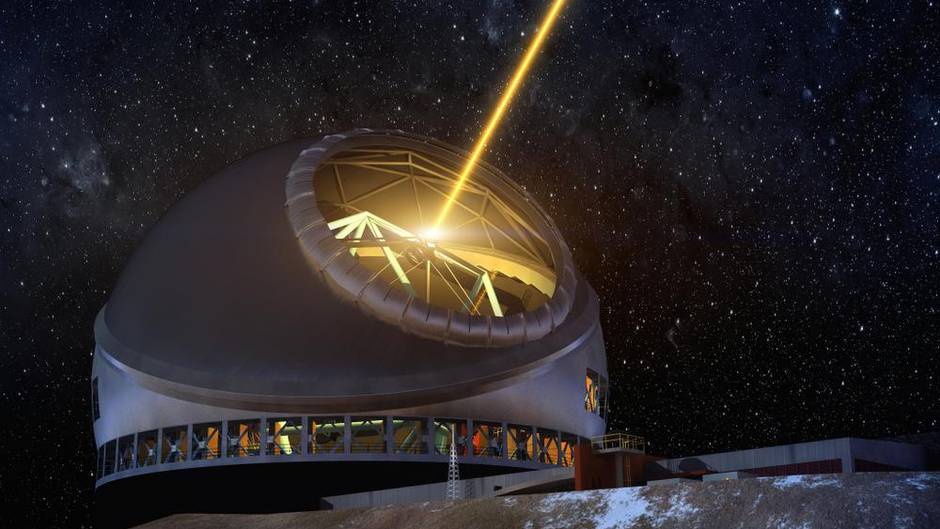 The telescope’s altitude above sea level (in metres)

The height of the Canadian-built dome (in metres)

The diameter of dome (in metres)

The Thirty Metre Telescope (TMT) has all the makings of a giant discovery machine.

Its primary mirror, composed of 492 hexagonal segments, will be wider than a National Hockey League rink. When pointed skyward, it will collect about 18 million times as much light from the distant stars as the human eye, giving astronomers the most penetrating and precise look at the universe they have ever known.

Perched on the top of Mauna Kea, a dormant Hawaiian volcano and one of the world’s best astronomical sites, the TMT will peer right to the edge of the visible universe. Since the light it receives will have been travelling for billions of years, it will effectively become a time machine. It may witness the birth of the first stars. It will see galaxies spinning and giant black holes devouring the matter that surrounds them. Closer to home, it is expected to see planets similar to our own, and potentially distinguish those amenable to life. In our solar system, it will reveal some of the smallest and faintest objects in a way only a space probe can now. Even the prolific Hubble Space Telescope, launched 25 years ago this month, will be left eating interstellar dust once the TMT opens around 2023.

No surprise, then, that Canadian astronomers were in seventh heaven this week after Prime Minister Stephen Harper announced that the federal government will support the TMT to the tune of $243.5-million. The investment is enough to secure 15 to 20 per cent of the telescope’s time for Canada. Other partners include the California Institute of Technology and the University of California, which together have a 25-per-cent stake, Japan with 20 per cent, and India and China with 10 per cent each. Exactly who will cover the remaining 15 to 20 per cent is one of many important details yet to be worked out.

The breadth of the partnership speaks to the realities of big science in the 21st century. The TMT is simply not the kind of leap forward that a country would likely undertake on its own – both because of the $1.5-billion price tag and the global expertise needed to pull it off. One other telescope project that is even larger is led by a European consortium. A third, somewhat smaller one involves yet another multinational collaboration.

But while it took years of effort by Canadian astronomers and their industrial partners to win over the Harper government, the real challenge has just begun.

Canada’s astronomers have now effectively shouldered part of the burden of making sure the observatory lives up to its impressive billing. Decisions made during the next phase of the project could determine whether, years from now, Canadian taxpayers feel they backed a winner – the astronomical equivalent of the Canadarm, let’s say – or are left wondering what they paid for.

Here are a few of the key hurdles the TMT faces on the road to celestial glory, along with the crucial roles Canadian team members need to play.

While the point of a dome is to protect the telescope from the elements, this must be done without impeding its performance. A dome should minimize air turbulence around the telescope, which distorts images, and allow the temperature inside to equalize with that outside quickly as day turns into night. It sounds simple, but the bigger the telescope the hard this gets.

Building the TMT’s dome, at a cost of $150-million, is now Canada’s job. The enclosure must be up before construction of the telescope can begin, so it’s key to keeping the project on track.

But the dome’s sheer size prevents a simple scaling up of conventional design. Instead, a revolutionary “calotte,” or skull cap, styled enclosure has been devised specifically for the TMT by Dynamic Structure Ltd. of Port Coquitlam, B.C. Unlike a traditional observatory dome with a vertical slit, the TMT enclosure features a swivelling top section with a hole that opens to let the telescope see the sky, while keeping turbulence to a minimum.

The novel design reduces the weight of the dome from 1,200 to around 750 tonnes, and presents less of a barrier to the wind, which on Mauna Kea can reach 200 kilometres an hour. And air is supposed to flow more smoothly across the dome opening, which should help to optimize the telescope’s seeing power.

The catch is that no one has constructed anything quite like this before, let alone transported it to a mountain peak thousands of kilometres away.

“You really have to worry about how you can build this structure, test it, dismantle it and then rebuild it on site,” says David Halliday, the engineer who led the enclosure’s design and development. As a result, he says, the hardest part of the entire process may be recruiting a construction crew that is up to the task.

The ability to see more light and therefore look more deeply into the cosmos is what will enable the TMT to make discoveries. But this will happen only if a sophisticated Canadian-built system on the back end of the telescope can compensate for the distortion caused by Earth’s ever-changing atmosphere.

Such systems, known as adaptive optics, are used by other large observatories, but the one being developed for the TMT is significantly more complicated. It includes two flexible mirrors that can subtly change shape 800 times a second. One is to correct for distortions that occur due to air movements near the Earth’s surface; the other, for movements about 11 kilometres up, where the jet stream is located.

The mirrors will be guided by five laser beams that will shoot dramatically into the sky, creating an artificial constellation. The TMT will use this to read the chaotic movement of air that constantly interferes with starlight on its way to the telescope. The rapid-fire number crunching required to make all of this possible will be the task of a specially designed computer system, also part of Canada’s contribution.

Together, the adaptive optics system will push the boundaries of what technology has been able to do to eliminate atmospheric effects. “It’s definitely the heart of the TMT,” says Luc Simard, a National Research Council astronomer who leads the telescope’s instruments group.

The ultimate goal, he says, is a telescope with vision so sharp, it could be in Victoria and spot a coin in Calgary.

Major international science projects can evolve into highly creative and interactive centres of innovation, or they can become insular worlds in which each partner nation perpetuates its own imported bureaucracy.

While Canada officially joined the project only this week, Canadian astronomers and engineers have been playing a big role in TMT’s design for years, and have helped to set the tone for the scientific community emerging from the project.

Dr. Simard says the TMT community is already more collaborative than many expected. But as the project progresses, a telling sign will be how well its leadership balances the prerogatives of individual partners, while still pushing for science that has the highest level of impact for all.

Meanwhile, the project faces a more immediate human-relations challenge, as Hawaiian native activists try to halt construction on what they regard as sacred ground. Although Mauna Kea bristles with observatories, including the Canada-France-Hawaii Telescope, opposition has grown since the last major construction more than 15 years ago.

The project has been through a lengthy review, and construction was approved last month, but protests at the site last week led to 31 arrests and led Governor David Ige to call for a pause in construction to allow further discussions. 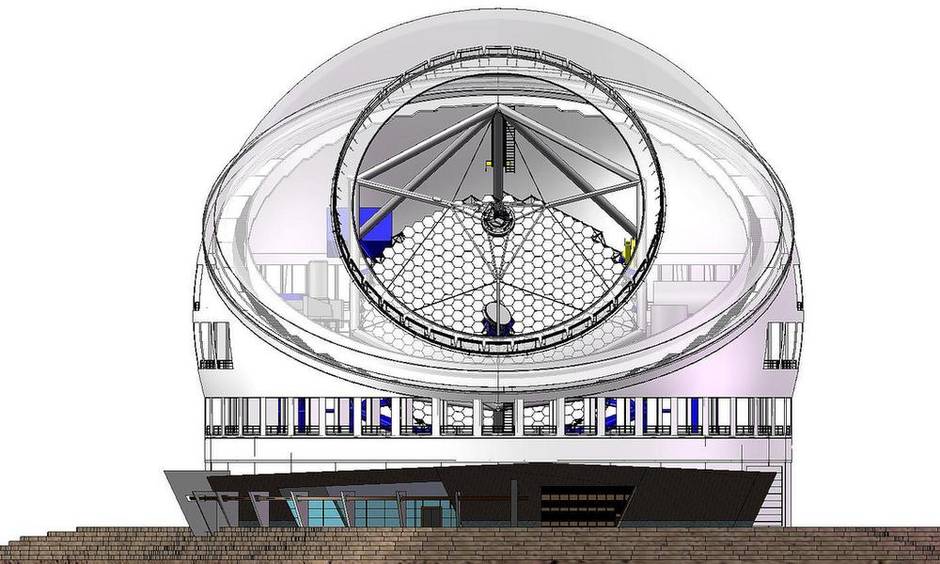