Enraged Chinese shoppers pelted Apple Inc.'s flagship Beijing store with eggs and shoving matches with police broke out when customers were told the store would not begin sales of the popular iPhone 4S as scheduled.

Apple said later Friday after the botched launch at its store in Beijing's trendy Sanlitun district that it would halt all retail sales of the latest iPhone in China for the time being, but said the phones would be available online, through its partner China Unicom or at official Apple resellers.

Scuffles broke out before daybreak between security staff and shoppers, many of whom had waited in line overnight in sub-freezing weather, after an official with a bullhorn told the restless crowd around 7 a.m. that the phones would not go on sale as planned and that they should go home.

Police dragged some people away and photos appeared on the Chinese blogosphere of a man who had brought raw eggs in a plastic bag handing them out before people heaved them at the store's tall glass windows.

"We're suffering from cold and hunger," a man in his 20s shouted to Reuters Television. "They said they're not going to sell to us. Why? Why?"

"I got in line around 11 p.m., and beyond the line the plaza was chock full with people," said Huang Xiantong, 26, outside the store.

"Around 5 a.m. the crowds in the plaza broke through and the line disappeared entirely. Everyone was fighting, several people were hurt," said Mr. Huang, who wanted to buy a new iPhone for his girlfriend. "The police just started hitting people. They were just brawling."

Apple's latest iPhone, with a number of new features including responding to commands with a voice of its own, was introduced in China and 21 other countries on Friday to great anticipation.

"The demand for iPhone 4S has been incredible and our stores in China have already sold out," Apple said in a statement. "Unfortunately we were unable to open our store at Sanlitun due to the large crowd and to ensure the safety of our customers and employees, the iPhone will not be available in our retail stores in Beijing and Shanghai for the time being," Apple said.

Apple's CEO, Tim Cook, said in a Jan. 4 statement that "customer response to our products in China has been off the charts. With the launch in China ... iPhone 4S will be available in over 90 countries making this our fastest iPhone rollout ever."

The snafu lit up China's vibrant microblog community with one commentator likening the line at the store to the country's annual Spring Festival rush to buy cherished train tickets home.

"If people had to make a choice, I think iPhone fans would rather buy an iPhone 4S than go home," said the blogger, using the online name Zhang Xinchun Daqi.

Apple's products are wildly popular with Chinese customers, who are eager to be early adopters and get the latest technology first. Many of the customers in Beijing Friday appeared to be scalpers hoping to scoop up iPhones to resell.

Scalpers are a common sight outside Apple's stores in China, selling genuine Apple products, usually iPhones, at a markup for people who don't want to wait in line or find that stores are out of stock.

At the Sanlitun store, people who appeared to be working on behalf of scalpers were in line in groups of 50, wearing the same hats or gloves, said Mr. Huang, the Liaoning shopper. "The police talked with their leaders," he said.

At least 1,000 people were hired by scalpers to stand in line for them at the Sanlitun store, the government-run news agency Xinhua said.

At Apple's other store in Beijing's Xidan district, iPhone 4S sales proceeded briskly with the store selling its entire stock of 2,000 by 9 a.m., one shopper at the store was told.

Official resellers, including one next to the Xidan store, continued to sell the iPhone 4S.

At the Sanlitun store the crowd had mostly left by 10 a.m., but the store remained closed and was ringed by about 50 police at lunchtime.

At one of Shanghai's three Apple stores, 24-year-old Jin Long said he had been in line since 2 p.m. Thursday afternoon, receiving a coveted ticket allowing him to buy a new iPhone.

"After waiting all and getting the card, my relative didn't bring cash for the transaction and security guards and store workers tore up our tickets," he told Reuters TV. "With this kind of attitude, who wants to buy their machines in the future?" 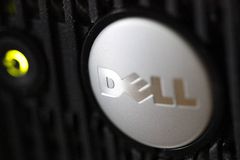 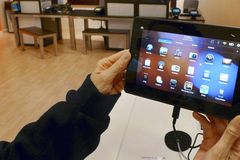 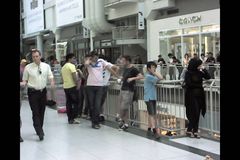