For a glimpse into the future of the world's biggest electronics show, look to a Canadian researcher who's building a paper-like computer.

Queen's University computer science professor Roel Vertegaal is at the massive Consumer Electronics Show in Las Vegas this week to show off a prototype of a bendable, paper-thin tablet that could change the way consumers think about mobile computing.

"CES is obviously the biggest tech show on earth," Prof. Vertegaal said. "We're here trying to push the envelope, trying to show what tablet PCs are going to look like in the not-too-distant future."

The concept behind the so-called "Papertab" is not only to build paper-thin tablets, but to build tablets that actually behave like paper.

Prof. Vertegaal first started working on the idea several years ago, projecting images of operating system software onto a piece of paper. But the technology took off after he connected with Plastic Logic, a company that makes displays so thin, they can be bent.

Currently, the researchers have managed to make almost all the components, from the battery to the memory, slim enough to fit within the paper-thin display. They are working with Intel Corp. researchers on the final component, the processor.

Traditional computers show many windows in one screen, but Papertabs are designed to be used in groups, with one program or window on each tablet. Unlike most regular tablets, Papertabs are also designed to be aware of their location relative to other Papertabs. As a result, placing one Papertab next to another one stretches the screen across both. A user can also send an e-mail by placing the Papertab in an outbox: It can recognize that it has been put in a certain location, and performs a task based on that location. So putting the tablet in a place (in this case, an outbox) is equivalent to hitting the send button.

Unlike most technology on display at the sprawling show, the paper tablet is still about three to five years from landing in consumers' hands. But the technology's development represents a growing trend at CES. Overwhelmingly, the most exciting announcements at CES so far have come from companies few people have ever heard of.

Kicking off this week in Las Vegas, CES is facing an identity crisis. Microsoft, which has for years been the conference's biggest name, has all but abandoned the show. Other big companies, such as Research In Motion, are avoiding a big presence at CES because of timing issues, while tech giants such as Google and Apple never show up at all. That has left a vacuum atop the CES hierarchy, which companies such as LG, Sony and Samsung are attempting to fill.

But almost all of the biggest tech companies at CES this year are planning incremental announcements – slightly upgraded versions of their existing smartphones, TVs and computers.

"Samsung is certainly the mammoth of CES now," says Forrester analyst Sarah Rotman Epps, "but the real news is created by smaller companies, like those in the digital health space, rather than the tech giants."

Ms. Epps points to companies such as Bodymedia and Fitlinxx, which build wearable fitness monitors, as some of the more interesting participants at this year's CES. She also notes that the show itself is fundamentally changing. CES was once exclusively a show for tech giants, but it now attracts non-tech companies that are becoming digital-minded – from Ford to Associated Press.

At a preview event for reporters on Sunday, two dozen companies selected by CES organizers showed off what are generally regarded to be the most interesting or promising products and technologies at the show. Most of those companies selected were relatively unknown: a mobile charger firm called Nectar and another company, Masimo, which builds a pulse-monitoring smartphone attachment.

The CES show floor doesn't officially open until today, at which point some 130,000 people will descend on some 3,000 vendor booths boasting 20,000 products. On Monday, many of the biggest companies at the show held media-only events at the Mandalay Bay hotel in front of thousands of reporters from around the globe.

Innovative cameras, TVs and other pictures from the Consumer Electronics Show
Gallery
January 8, 2013 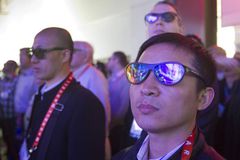 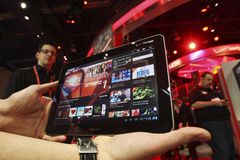 Four things to watch for at the Consumer Electronics Show
January 6, 2013 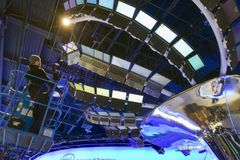 The very best - and absolute worst - of the Internet
December 31, 2012
Follow Omar El Akkad on Twitter @omarelakkad
Report an error Editorial code of conduct
Due to technical reasons, we have temporarily removed commenting from our articles. We hope to have this fixed soon. Thank you for your patience. If you are looking to give feedback on our new site, please send it along to feedback@globeandmail.com. If you want to write a letter to the editor, please forward to letters@globeandmail.com.
Comments