A new player from Canada's East Coast is rolling the dice on the high-stakes game of wireless communications.

Eastlink, a subsidiary of Bragg Communications Inc., will become the latest upstart to wade into the cutthroat wireless market on Friday when it begins selling services at its flagship Halifax store.

The company was among the latest crop of new entrants that purchased wireless licences in 2008, spending $200-million in the run-up to this week's launch. In recent years, however, industry dynamics have undergone a radical change. Calgary-based Shaw Communications Inc. has nixed its once lofty wireless ambitions because it said it couldn't make a decent return, while other new entrants such as Wind Mobile, Mobilicity and Public Mobile appear to be floundering as smartphone-obsessed Canadians shift their consumption habits.

This comes as the big three wireless carriers continue to pour millions into improving their services in Atlantic Canada to provide faster mobile speeds. That's because consumers are spending less time talking, but their use of data is accelerating as they stream mobile video, surf the Web and use social media. At the same time, incumbents have ramped up their offerings of unlimited talk, dealing another blow to voice-centric upstarts.

As a result, the wireless market is fraught with both opportunity and risk for Eastlink, a cable company that has 550,000 TV subscribers in nine provinces and also sells Internet and home phone services. It already faces a formidable competitor with Bell Aliant Inc., but other carriers are also increasing their focus on Atlantic Canada.

Rogers Communications Inc. is spending $80-million to upgrade its wireless service across the region, while Telus Corp. plans to invest $8.4-million. Wind also plans to launch service in Halifax.

"There is no tremendous speed-to-market advantage for us," Eastlink chief executive officer Lee Bragg said. "We're moving into a market that is already dominated by some big players. … It is more important to do it right."

Eastlink's wireless launch comes almost five years after it bought wireless spectrum covering swaths of Atlantic Canada and parts of Ontario and Alberta. The private company has faced criticism about being too slow to launch, but Eastlink executives say that prudent approach has put the company on a better footing because it took the time to learn from the mistakes of other carriers.

Upstarts such as Wind initially placed their bets on a talk-and-text business model where consumers pay upfront. Wind has since tossed out that plan to focus on acquiring postpaid customers.

"We thought there was a great opportunity for us to watch other new entrants heading into the marketplace, learn from them and learn from the competitive reaction to how they launched," said Matthew MacLellan, Eastlink's wireless president. "That has been a very helpful exercise."

Asked why Eastlink can make it work when Shaw couldn't, Mr. Bragg says his family, which started off in the wild-blueberry business, has proved the skeptics wrong before. "We just think it makes sense for us," he said. "I don't think there is that much magic to it."

Since the wireless market is increasingly data-focused, Eastlink decided to launch its service on a 4G LTE (fourth-generation, long-term evolution) wireless network after other new entrants opted to launch with 3G. "There are a lot more devices available if you have LTE," Mr. MacLellan said.

Eastlink's smartphone lineup will initially include the Sony Xperia T, Samsung Galaxy S III, LG Nexus 4 and two BlackBerry models including the Bold and Curve. Although it plans to offer the new BlackBerry 10 devices next month, it will not offer the iPhone.

Eastlink is betting on a bundle strategy that gives consumers discounts for taking multiple products – a tactic also used by arch rival Bell. Over the coming weeks, its wireless products will be sold in more retail locations across Nova Scotia and PEI. It also plans to open six to nine more stores over the next 12 to 18 months. 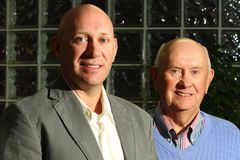 Shaw sells Nova Scotia cable assets for $220-million
May 3, 2001
Unloved out East
April 7, 2005
EastLink seeks CRTC intervention
July 7, 2003
Follow Rita Trichur on Twitter @ritatrichur
Report an error Editorial code of conduct
Due to technical reasons, we have temporarily removed commenting from our articles. We hope to have this fixed soon. Thank you for your patience. If you are looking to give feedback on our new site, please send it along to feedback@globeandmail.com. If you want to write a letter to the editor, please forward to letters@globeandmail.com.
Comments