Knee-deep in foul-smelling water, workers are piling office equipment, documents and food onto fibre boats that ferry them from one building on Hana Microelectronics' 12-acre company site to another with more space on higher floors.

It has been six weeks since Thailand's worst flooding in decades turned its industrial heartland into a real-life Waterworld.

The disruption caused by Thailand's floods has shone a light on the importance of its industrial sector in the global supply chain and how reliant the world's leading companies from hard disk drive (HDD) manufacturers and auto firms have become on its factories.

The country of 67 million people produces around half of global hard drives and houses top hard-drive makers Western Digital Corp. , Seagate Technology Pcl and Toshiba Corp. It is also a production hub for large multinational car makers such as Toyota Motor Corp. and Ford Motor Co.

Floods will shrink global HDD supply by 30 per cent in the current quarter, and hit sales of PCs and semiconductors, affecting core businesses of the likes of Samsung, Lenovo Group Ltd. and Hewlett-Packard Co. , according to research firm IHS iSuppli.

Many expect PC makers will be unable to restore production to full scale until the first half of next year as pre-floods HDD inventories will be exhausted and depleted and drive manufacturers have yet to recover from the damage from the flood.

The water is going down 20 cm a day. But it reached 2 meters at one point and will take time to clear, said General Manager Bruce Stromstad.

Hana Microelectronics Pcl, Thailand's biggest semiconductor packager, managed to get its integrated circuits – a vital part in virtually all electronic equipment from mobile phones and tablets to computers – outside the flood zone a week before the water breached defensive dikes on October 13.

But it could do nothing about the dozens of machines weighing up to 5 tons each on the ground floor of the main building, which was almost entirely submerged.

"As you can see, it's still a big mess here," said Mr. Stromstad, as he directed some of the 50 staff – skilled workers mucking in with the rest – scrubbing dirty floors and removing sandbags in the burning sun.

"Right now, it's just planning for the clean-up. We had to purchase a lot of materials, equipment for power washing the walls and disinfectant to take care of the mold, funguses, things like that."

Damage to equipment could go as high as $30-million, with the whole clean-up costing several million dollars more, said the 67-year-old executive from Silicon Valley, California.

Some end up in products from Apple Inc. and Samsung Electronics Co Ltd.

Like many flood-hit manufacturers, the biggest problem in getting production back to normal is finding electricity and clean water, Mr. Stromstad said, expecting it will be months before they are back into production.

"We have no electricity for emergency generators and that's what we need from the government and the industrial estate authority," Mr. Stromstad, wearing knee-high rubber boots and a baseball cap, said as he surveyed the damage. "We need to be able to turn on the air conditioning, which will then allow us to dehumidify the building."

"The concern now is employees' health because this water is pretty dirty. A lot of what we were bringing in was bathing water, as well as drinking water and food, because when they get out of the water, the first thing everybody wants to do is wash."

And it's not just the industrial waste and oil in the murky water that the workers need to worry about: reptiles are also lurking. Two crocodiles have been spotted in the parking lot and a cobra snuck into the building, prompting a rapid fumigation of the premises.

Some employees have even greater concerns.

"Just like everyone else, my deepest fear was whether I'd lose my job after this," said Thammachai Chantarat, 38, head of the integrated circuit unit of the plant, who has a pregnant wife at home.

"The situation at my house is no better. When the water was really high, I got stuck at my house for three weeks and getting food and water was just really difficult," he said.

Hana isn't pulling out, as the big clean-up attests. The company kept all of its 4,100 staff on the payroll.

To some extent, it was helped by having the highest elevation in the industrial estate. The other 142 companies from largest neighbour Canon Inc. , the world's biggest camera maker, to smaller printed circuit board maker KCE Electronics Pcl were flooded even harder.

"Guys like Canon are really devastated. We're in really bad shape but they're even worse."

Payungsak Chartsutipol, chairman of the Federation of Thai Industries, said the total damage of the flooded factories both inside and outside the industrial estates could exceed $16-billion if the problem is prolonged.

"The impact on electronics factories is more than that on auto parts as the electronic industry is the country's number one export business," he told Reuters.

With operations disrupted at more than a dozen hard disk drive factories, damage to the industry is significant and PC shipments may be crimped by as much as a fifth in the first three months of 2012, hurt by the shortage of hard drives, according to research firm IDC.

"I just sold my last HDD today from the supply I got at the beginning of the month. It's just hard to try to keep items of such high price in the storage when no customers want to purchase them," Lee Gil-jae, 40, said.

Before the shortage, he sold 50 new HDDs and 100 used ones a day, but now the number has shrunk to 1 and 20 respectively.

"Usually we sold 5-10 HDDs per day but for the past few weeks customers just left after asking for the price," Lee Shin-heon, 36, a merchant at another store, said.

With the slow-moving water still washing through some parts of Thailand, Prime Minister Yingluck Shinawatra has proposed spending $4.2-billion on reconstruction and steps to prevent future floods.

Her biggest task is to reassure foreign investors that at the end of the day Thailand is still a place worth investing in.

"I don't think people will move out. They have too much invested here. The question would be: would they expand in the future or would they invest in other countries?" Mr. Stromstad said.

"The government has to take some real positive action on long-term flood prevention." 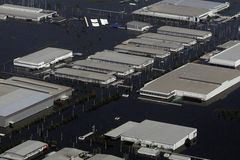 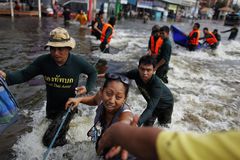