Samsung Electronics Co. Ltd. plans to release two new versions of its top-tier Galaxy smartphone next month, including a model with a display covering three sides, according to people with direct knowledge of the matter.

Samsung has been stung by Apple Inc.'s new iPhones, ceding global market share after the larger-screen devices captured sales in a segment pioneered by the Galaxy S lineup. Asia's biggest technology company is using its skills in displays and chips to recapture its innovation edge and revive earnings that have slumped for three straight quarters.

"Samsung need a model with new technology to stop the iPhone juggernaut and to distinguish it from others," said Lee Sang Hun, a Seoul-based analyst at HI Investment & Securities Co. "Although Samsung is continuing to release cheaper models globally to defend its market share, the next S phone is more important because that's where they make money."

The company unveiled its first device with a multiple-sided screen last year with the Galaxy Note Edge, a 5.6-inch phone with a display stretching down the right side so users can read messages and news from an angle.

One of the new Galaxy phones will have a screen that covers the front and both the left and right sides, the people said.

Samsung declined to comment on its phone specifications in an e-mail.

The new Galaxy phones, developed under the "Project Zero" codename, will use metal frames supplied by BYD Electronic International Co., one of the people familiar with the matter said. That is a subsidiary of BYD Co., the Chinese auto maker partially owned by Warren Buffett's Berkshire Hathaway Inc.

Samsung hinted at a wraparound screen in invitations this month to a March 1 unpacking event in Barcelona ahead of Mobile World Congress, the same event it chose last year to unveil its Galaxy S5. Sales of the S5 failed to match those of its predecessors.

The e-mailed invitations included the statement "What's Next" under the image of a curved line that resembles the shape of the Note Edge and its wraparound screen. The Feb. 3 invitations didn't name the new product.

"Note Edge was received better in the market than I had expected as people found it quite useful to do multitasking," said Lee Seung Woo, an analyst at IBK Securities Co. in Seoul. "The ultimate goal of Samsung is to make a truly foldable device at some point and the dual-edge screens will help it draw more attention from device makers to its most advanced display technology."

Samsung lost its lead in the global smartphone market last quarter as Apple rose into a tie as the biggest producer. Both companies shipped 74.5 million smartphones in the December quarter for 19.6 per cent of the market, Strategy Analytics said Jan. 29.

Apple's iPhone 6 and 6 Plus have gained in the world's largest market of China, where consumers want a bigger device to perform the role of a phone and tablet computer.

That has squeezed Samsung as it struggles to differentiate itself from Chinese vendors, including Xiaomi Corp. and Lenovo Group Ltd., that offer feature-packed devices using Google Inc.'s Android, the same software that powers Galaxy phones.

Samsung plans to use its own microprocessors in the next Galaxy S, dropping a Qualcomm Inc. chip that overheated during the Korean company's testing, people with direct knowledge of the matter said last month.

Net income, excluding minority interests, plunged 27 per cent to 5.29 trillion won in the fourth quarter. Operating profit at the mobile-phone unit slumped by almost two-thirds to 1.96 trillion won and the business was overtaken by chips in the third quarter as Samsung's biggest profit driver. 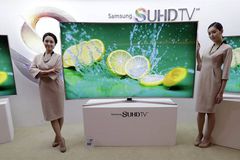 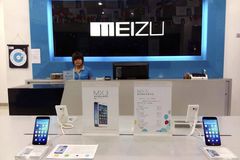