Should a 4-year-old child own a smartphone?

The debate over how much technology to expose children to was reignited once again Sunday night after a user on technology site Slashdot asked for advice on what kind of a smartphone he should buy for his 4-year-old son.

The question sparked an avalanche of responses, many of them scandalized at the thought of a child so young owning a mobile device.

"I understand you want to speak and see your son, but the reason a 4yo don't have phones is because they are not ready for their use," wrote one user. "Let the kid play with playmobile and later lego. Let him be a child and when he's ready for a mobile, he'll tell you by putting it on his Christmas list."

User Penguinstorm echoed the outrage, writing, "Really? His days are booked? All those board meetings are interfering with, you know, BEING A FOUR YEAR OLD."

And recently, a rant by comedian Louis C.K. on the "evils" of cellphones and why he won't allow his daughter to own one, went viral on social media.

But others who joined the Slashdot debate offered their support for the father, taking note of his claim that he's not able to see his child as much as he'd like to, and needs a way to keep in touch with him directly.

Many offered tech tips, recommending apps and phones that allow for parental controls, so that if the father does decide to get his child a cellphone, at least the child can use it safely.

Basic, kid-friendly cellphones have been on the market for years, though not all Canadian wireless providers carry them. Devices like the Firefly glowphone (available in the U.S.) offer parents the ability to restrict calls to a list of 48 mom- and dad-approved phone numbers, as well as limits on how many calls and texts can be made.

For parents adamant about getting their kids a smartphone, apps like Kytephone (which is free to download, but costs $5 per month for the service) can be installed on most devices to manage what kids can access, and when. Kytephone, which is aimed at teens, allows parents to block calls and texts from strangers, and to filter out inappropriate (violent, pornographic) content. Parents are able to access their kids' phone record remotely, seeing in real-time who their kids are communicating with, how much time they're spending on specific games, and what photos they're taking and sending.

Another option is a tablet like the Nabi Jr., designed for young children, which parents can load Skype or other face-to-face communication apps onto. These tablets are marketed as educational tools, with learning-based apps and a list of parent-approved programs to choose from.

Or, instead of buying the child his or her own cellphone, many users on Slashdot suggested that the father simply schedule video calls with the child using Skype or Facetime on another adult's device.

Others noted that iPads and iPhones offer a number of parental controls, including restricting who the child is allowed to call or text. Wireless providers such as Rogers, meanwhile, also have services that allow parents to restrict when children make calls and to whom.

Not everyone loves Louis C.K.’s rant on the evils of cellphones
September 24, 2013 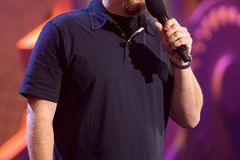 Do cellphones stunt our humanity? Readers weigh in
September 27, 2013 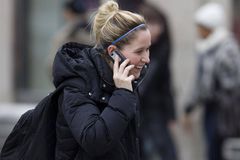