Whenever Apple schedules a press event to announce something new the world stops and takes notice. On Thursday, teachers especially will be paying close attention.

At 10 a.m. ET, the iPad-maker is set to make an unspecified announcement about education, which has plugged-in teachers buzzing.

While some are excited about the learning potential of e-textbooks and how Apple could make them mainstream, others are thinking bigger.

"I hope they have something more up their sleeves," said Rhonda McEwen, an assistant professor at the University of Toronto who has studied how non-verbal autistic children can learn with the iPad and iPod Touch.

"In the world Apple plays in, which is a new media and digital kind of environment, there's so much more scope to do more interesting things."

She's hoping that Apple might announce some deals with universities or other educational groups to partner in researching some truly innovative approaches to digital learning.

But teacher Kris Odette will be excited even if Apple is just announcing deals to further expand the use of digital textbooks.

Mr. Odette teaches Grade 7 and 8 students at the W. C. Little Elementary School in Barrie, Ont., and for about four years has been a part of the school's e-textbook pilot project.

"Essentially everyone has their own website and when they log in all their textbooks are available for them," explained Mr. Odette, who added that students can either bring in their own device to read on, or use one of the school's computers to access e-textbooks in class.

Getting the kids to pay attention and keep from becoming distracted hasn't been a problem, he said, since they're generally enthusiastic about using the technology instead of pulling out old-fashioned textbooks or copying notes off the chalkboard.

Plus, using a computer to learn is completely natural to kids today, he added.

"The idea is trying to move with the digital age and students are (already) accessing computers for all their information," Mr. Odette said.

"Parents were a little hesitant at first but once they saw the results — (student marks) are averaging eight to 10 per cent higher with the digital textbooks — and how engaged and motivated the students became the parents were very receptive to say, 'What more can we do?' "

The school gets its texts from Pearson Canada, which says demand for digital learning tools is not new.

"This has been going on for more than the last year," said Sandra Nagy, Pearson Canada's director of digital learning.

"I've seen a huge change in the last few years as people look for the content digitally.... There's a lot more hunger for that right now, both in the schools and from parents, who don't necessarily want their kids walking around with a weighted-down backpack."

Pearson's eText products — which can be updated with new information — include digital features like embedded video and audio, the ability to search the book by keywords, and links that go to external websites for more information. Students can also digitally mark up the e-textbook as much as they'd like with notes and highlights. The e-textbooks work on computers, iPads and there are plans to expand to other platforms, including Google Android devices.

While Nagy said the digital texts have been less popular with the earlier grades, Odette believes tablets will be a great teaching tool for young kids.

"Kids are hands-on learners, that's one of our main learning styles in elementary school, especially with younger students," he said.

"So the idea that the kids can actually physically manipulate whatever they see on the screen by use of a tablet I think is only catering more to what they're going to need." 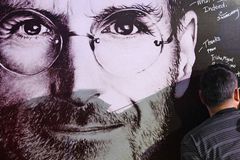 Apple halts sales of iPhone 4S in China after mini-riot
May 8, 2018 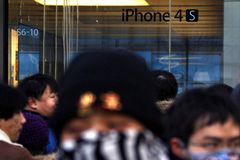