Twitter Inc. stock trended down again on Thursday after mixed results in its fourth-quarter earnings reinforced the market's concerns about the social network's ability to expand its audience.

Twitter reported its monthly active user (MAU) base was 320 million, same as it was in the third quarter, but when the category of users who access the service through SMS (text messaging) is removed, the core Twitter MAU figure dropped to 305 million from 307 million. That's well off the consensus estimate of analysts, who predicted the company would add four million core users.

"SMS users are not very revenue-generative given the limitations they have with connectivity," wrote Richard Windsor, analyst at Edison Investment Research. In part, that's why Twitter announced that as of the first quarter of 2016, it will no longer include the SMS fast followers as part of its MAU base.

Back in April, 2015, Twitter began counting the relatively small collection of users who access the service solely through SMS text messages, mostly in emerging markets such as Brazil where so-called feature phones – without data plans necessary for Twitter's web or mobile experience – are more common.

"If MAUs never recover, then surely the stock has another leg down ahead. However, we continue to believe that with any momentum on MAUs, the stock should recover sharply," wrote Michael Graham, analyst with Canaccord Genuity Inc.

Twitter chief executive officer Jack Dorsey said the company has spent the past six months "developing a stronger point of view about what we are," and has come out focused on its live experiences, in text and in video.

"Twitter starts with live; it's powerful because it's public and it can be everywhere because it's distributed," he said. "Once you see an event unfold on Twitter, there's a real sense of electricity. We want to make that a whole lot easier."

In its fiscal year 2015 shareholder letter, released Wednesday, the company promised to "fix the broken windows and confusing parts, like the .@name syntax and @reply rules, that we know inhibit usage and drive people away." Those modifications were the second huge changes to the core Twitter product announced earlier Wednesday. The first was the much-discussed arrival of an algorithmic feed that would prioritize "best" or "important" tweets over the most recent.

"We saw some really promising growth with the test of the timeline," said Mr. Dorsey, who added that user engagement, including likes, replies, tweets and retweets, all increased in those tests.

CFO Anthony Noto said the company began to see stronger user growth in "new users and resurrected users" as well as better user retention in January thanks in part to a marketing push. He did warn that advertiser exposure is highest in the fourth quarter, so the marketing reach may decline in early 2016.

"Historically, Q4 has been a slow quarter for Twitter, while in 2016 the U.S. elections and the Olympics will be two big events that will be expected to help push their active users up," said Sotirios Paroutis, an associate professor of strategic management at Warwick Business School in Coventry, England, who researches Twitter. (Mr. Dorsey also referred to election years being "fantastic for us.")

"In the last three months, Twitter has underperformed its rivals, Facebook, Linkedin and Google, all of whom have seen the size of their user bases expand," wrote Mr. Windsor. "We think that the reason for this is Twitter's very narrow focus when it comes to Digital Life, meaning that it can only appeal to a subset of the Internet population. The logged-out audience [members] who visit Twitter also remained flat at 500-million users, strongly indicating that Twitter's niche service as it exists today has found the limit of its reach."

Mr. Dorsey, though, believes there is still a chance to become more than just the second- or third-best social network. "We think we can build the world's largest daily connected audience," he said on the investor call, which was live-streamed on the company's mobile video app Periscope.

Twitter shares sank more than 4 per cent to an all-time low of $13.91 in intraday trading Thursday, before regaining some value later in the day. More than 20 brokerages cut their price targets on the stock. 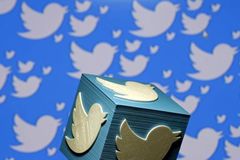