It used to be so easy to watch TV: Sit, snack, surf. Now we have to work for our entertainment, curating content on a myriad of screens. Yes, we're getting a superior product, but today's TV experience can be challenging for viewers – never mind broadcasters.

While summer has traditionally been a downtime for viewership, it was top of mind in the mountains of Alberta this week, as some of the biggest players in the business gathered at the Banff World Media (formerly Television) Festival to explore what's next for the industry as the digital revolution continues to radically alter the landscape.

"For many, many years, the technology didn't change the fundamentals of the business, it just enhanced the visual experience: we went from black and white to colour, we had remote controls," says Ira Kurgan, chief of network business operations for the Fox Broadcasting Company. "Now because of the development of these digital businesses, it has changed – miraculously."

Hardware once enhanced the experience; now it reflects a fundamental change.

"If you look at most new televisions, they're all coming with an internet connection in the back," Google senior vice president and chief business officer Nikesh Arora told an audience at Banff on Wednesday. "The moment you stick an internet connection behind a TV, it just becomes a very big iPad and you can do everything on that screen that you can do on most screens in your house.

"This industry's moving extremely, extremely fast. Extremely fast. And it's going to require a lot of people to sort of move in lockstep and constantly innovate."

Over-the-top, on-demand services coupled with this golden age of must-see programming are creating a TV universe that is more consumer-specific and direct, allowing viewers to "mix and match and make your own, figure out what you want to watch, when you want to watch, and so on," says Kevin Beggs, the president of television programming and production for Lionsgate Entertainment.

Sounds great, right? But wait until the bills roll in – basic cable, specialty channels, and services such as Hulu Plus, Amazon Prime or HBO GO. Once they're available in Canada, you'll want the full variety because each offers unique programming, according to Mr. Beggs.

"It's going to be increasingly a kind of a la carte pay universe."

Online, it's also a free universe (some of it even legal). Networks have begun offering some series premieres online – even before they're broadcast – to generate buzz. YouTube viewers have free access to seemingly unlimited content and while much of it used to be user-generated, that too is evolving, according to Mr. Arora, whose company bought YouTube in 2006.

"Every content creator wants ... their content to be watched as much as it can be. And I think a platform like YouTube allows that to happen. Many broadcasters, who are very good at what they do, understand that opportunity and they're partnering with us to make sure that the content is available to the end user."

For many, it's become second nature to view content on computers, but what we don't have the ability to do, for the most part, is watch live programming. That, too, is changing, with some networks and specialty channels (U.S., for now) live-streaming (or planning to) their linear product.

"I really think this is the future. We are rapidly moving to multiscreen platforms," says Stuart Snyder, president and COO of Turner Broadcasting System's Animation, Young Adults & Kids Media Division. "Today's child is really growing up in a world of watching content on their computers – really getting it whenever and wherever they want. I think that trend is taking hold and is going to continue to take hold."

Technology is, in many ways, also driving content. Viewers who PVR, stream or download programs can keep up with complex story lines on sophisticated serialized dramas as they develop.

"As soon as you get into serial programming, it gives you the opportunity to go very, very deep on story development and to put layers into it that you just don't see in episodic-based programming," says Paul Robertson, Group Vice President, Broadcasting and President, Shaw Media.

At Banff, ABC Entertainment Group president Paul Lee said in his keynote address that viewers are more savvy and smarter, so TV in turn has to be smart in order to satisfy the Wikipedia generation.

"Smart is the new mainstream," he told The Globe and Mail afterward. "For shows to work, they've got to be smart shows."

He said he doesn't see the DIY content on YouTube as a threat to the "lean back" experience offered by traditional television – even on a non-traditional platform.

What happens to Canadian content in all of this? CBC Executive Vice President, English Services Kirstine Stewart says digital platforms such as Netflix and Hulu can provide more eyeballs for Canadian shows.

Mr. Arora says the potential is even greater with a platform such as YouTube. "I think over time, given that the distribution mechanisms exist for every one of us to consume it around the world, I don't think we should restrict content to geographical borders in the future," he said at a session in Banff on Wednesday. But he warns it's tough out there against global brands, which will dominate.

It's all a challenge for the broadcasters, of course, no matter how cheerful they might sound. But it's also an opportunity. And in the end, even if our monthly bill soars with a dizzying selection of platforms, the viewer wins, according to Mr. Kurgan at Fox.

"For a consumer who's a content junkie, this is a great time for them. It's just the content companies have to figure out what the business models are going forward, so we can continue to deliver all the great content that people want."

In One Year: Smart TVs

Smart TVs are becoming the new face of high-end viewing. Such TVs incorporate myriad Web-based services such as YouTube and Netflix as the primary viewing experience. In addition, expect such TVs to come with the same kinds of apps you'd see on your smart phone, so you can use your TV to check the weather, share content on Facebook, or chat with friends.

A number of companies that don't even build TVs will be pushing that trend. In particular, companies such as Microsoft will increasingly try to position the XBox as a hub for living-room entertainment. That will force TV makers to invest more money into building TVs that can essentially behave like Web-connected computers.

With more and more tech companies trying to control the entire living-room entertainment experience (think of heavyweights such as Google, Apple and Microsoft), it's likely those companies will begin playing a more direct role in building those TVs. Just as Google partnered with smartphone manufacturers to build a super-powered mobile device running on its Android software, expect software makers and content providers to start teaming up to build Apple, Google or even Netflix televisions. Such projects are, to a certain extent, already under way.

The launch of these new devices will mark a major turning point for the TV market: the moment when consumers start buying their sets primarily for on-demand, Web-based content, and not for cable and satellite viewing.

Currently, 3D TV might be a flop, but manufacturers are working hard on glasses-free 3D, which would remove one of the biggest annoyances with the technology.

And it may still be science fiction right now, but holographic content is becoming less and less expensive to produce (witness the Tupac Shakur "performance" at Coachella earlier this year), and in the coming half-decade may become the next battleground for content providers.

After years of lightning-fast technological advancements, the TV of the future may offer virtually no features at all.

Increasingly, the future of all data, including entertainment content, is in the cloud. Everyone from smartphone manufacturers to multinational tech firms are betting that consumers will soon stop caring what brand of device they buy, only that all their content is instantly accessible on any device, all the time.

The TV would be little more than a screen designed to run any of your content from anywhere – functioning as a media player, computer, game centre, smartphone or pretty much anything else you need it to be at any given moment.

This is dependent on a lot of variables, including massive consumer adoption of cloud technology and a universal software platform that allows content to run on just about any device. But if it does happen, it will usher in the era of the fully connected digital experience, where the screen on your TV is just as capable as the screen on your computer, phone, fridge or microwave. 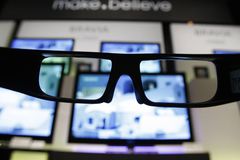