A Vancouver company attempting to build robots that can think and work has recruited a former Wal-Mart Stores Inc. senior executive as its chief operating officer.

Kindred Systems Inc. has hired Jim Liefer, who was vice-president of operations for Wal-Mart's online business from 2004-10 before spending six years as COO of U.S. online furniture retailer One Kings Lane. Mr. Liefer will work out of Kindred's San Francisco office, where most of its 37 employees are located.

"His skills and expertise are critical for the stage we're at now, and the objective of that is to create a scalable, profitable, service-based business that provides intelligent robots to work with people in e-commerce distribution centres," said chief executive officer Geordie Rose, revealing for the first time the market niche Kindred will target with its first generation of commercially-available robots.

Mr. Rose added while no e-commerce firms have yet signed on, Kindred's robot will be ready to deploy for pilot testing by the end of March. "The consuming focus of the organization is launching this product successfully," he said.

Kindred was co-founded in 2014 by Mr. Rose, a visionary theoretical physicist and entrepreneur whose previous startup, Burnaby, B.C.-based D-Wave Systems Inc., launched the first commercially available quantum computer. Kindred, which is attempting to build robots with "human-like intelligence" that can perform complex tasks beyond the capabilities of commercial robots, has raised $15-million (U.S.) from some of California's best-known venture capital firms, including Google Ventures and Uber backer Data Collective.

Robotic machines have been commonplace in industrial operations for years but those machines typically perform rigid, highly specific and repetitive tasks. Kindred's goal is for its robots to be able to perform more sophisticated tasks that robots cannot currently do, such as autonomously sorting items from vats of myriad items.

Mr. Liefer said Kindred's robots will be able to help with the pick-and-pack work flow in e-commerce warehouses, retrieving multiple items for individual orders and preparing them to be shipped. "There's complexity around how those items are picked and assembled in such a way that they can then be cartonized and provided to the consumer," Mr. Liefer said. "That's where the main targets are for Kindred for this product."

Kindred's groundbreaking approach is founded on the belief that robots can only learn intelligence by physically interacting with the world, guided by humans who train and interact with them. Kindred's system has human operators that remotely control robots to perform tasks, sometimes by wearing a robot suit whose motions and actions are mimicked by the machines. As those interactions happen, Kindred's machine-learning algorithms – programs built to self-write code – capture all data related to what the operator is doing and how the robot responds, allowing it to infer goals, automate the behaviour and come up with solutions to tasks that robots can perform without need of human help. Kindred's founders have said their goal is to create autonomous robots similar to Star Wars' C-3P0 and Data from Star Trek: The Next Generation.

While the long-standing displacement of jobs by technology seems likely to accelerate as companies seek to commercialize artificial-intelligence applications, Mr. Rose insists his smart robots will not displace human workers. Rather, he said they will unlock bottlenecks in distribution centres where "there simply aren't enough people to perform" the work. He said this will increase the turnover capacity of existing centres, creating "other opportunities for employment in other parts of the distribution chain. The product we're releasing will be net positive for employment within the U.S. specifically." 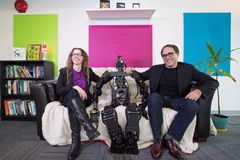 500 Startups’s first Canadian fund on track to exceed $30-million target
Subscriber content
January 20, 2017
Follow Sean Silcoff on Twitter @SeanSilcoff
Report an error
Due to technical reasons, we have temporarily removed commenting from our articles. We hope to have this fixed soon. Thank you for your patience. If you are looking to give feedback on our new site, please send it along to feedback@globeandmail.com. If you want to write a letter to the editor, please forward to letters@globeandmail.com.
Comments